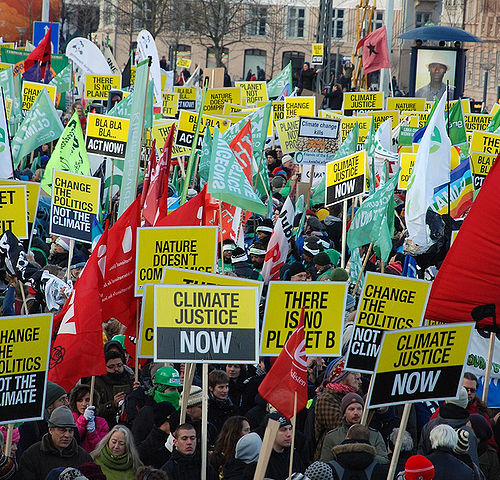 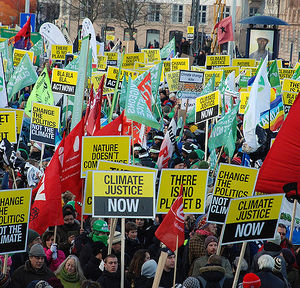 This page is the beginnings of a portal for community action in response to Climate emergency. The majority of our information about this is collated via our place pages ...Near you.

Because of the time lag in the carbon system, and due to our past emissions - we are still going to experience a certain level of climate change. Even if we stopped all emissions tomorrow we would expect another 30-40 years of temperature rise, and more than a century of sea-level rise. [1]

Community is used widely to be a group that gets together such as an association, but also includes municipalities with communal governance structures. Here more formal structures that comply with legal requirements or duties imposed by higher authorities may also give frameworks for action. For example planning can be done in a participatory way.

"Indications of changes in the earth's future climate must be treated with the utmost seriousness, and with the precautionary principle uppermost in our minds. Extensive climate changes may alter and threaten the living conditions of much of mankind. They may induce large-scale migration and lead to greater competition for the earth's resources. Such changes will place particularly heavy burdens on the world's most vulnerable countries. There may be increased danger of violent conflicts and wars, within and between states." [2]

Recognizing and addressing the fact that those least responsible for climate change experience its greatest impacts is seen by many as being central to climate justice. W

“Unless the burden of poverty in developing nations is alleviated by significant financial support for mitigation, adaptation, and the reduction of deforestation, the ability of developing countries to pursue sustainable development is likely to diminish, to the economic and environmental detriment of all.” 22 leading climate scientists [3]

Why climate change is a women’s issue[edit | edit source]

"Women are more likely to die or suffer the long term consequences of the rising tide of natural disasters and resource wars unleashed by climate change, and are largely excluded from the search for solutions," [4] see also Networks

Nov 6 Global Day of Action for Climate Justice, 2021, Sat. Only We CAN imagine and build the future that works for us all. On the 6th Nov, movements across the world are taking action in decentralised mass mobilisations – from indigenous struggles to trade unions, from racial justice groups to youth strikers. [5]

School strike for climate, also known in various regions as Fridays for the Future, Youth for climate or Youth strike 4 climate, is a growing international movement of children and students leaving their school to take part in demonstrations for climate action.

Citizens' Climate Lobby (CCL) is an international grassroots environmental group that trains and supports volunteers to build relationships with their elected representatives in order to influence climate policy. The CCL is a registered 501(c) with approximately $300 thousand in revenue in the United States in 2015. Operating since 2007, the goal of CCL is to build political support across party lines to put a price on carbon, specifically a revenue neutral carbon fee and dividend (CF&D) at the national level. CCL is supported by notable climate scientists James Hansen, Katharine Hayhoe, and Daniel Kammen. CCL's advisory board also includes former Secretary of State George P. Shultz, former US Representative Bob Inglis, actor Don Cheadle, and RESULTS founder Sam Daley-Harris.

What individuals can do[edit | edit source]

“Of course, individual action needs to be part of the battle, but not as a substitute for policy reform. It should be as an additional component." Michael Mann, professor of atmospheric science at Penn State University [7]