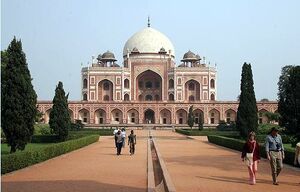 India, officially the Republic of India (Hindi: Bhārat Gaṇarājya), is a country in South Asia. It is the second-most populous country, the seventh-largest country by land area, and the most populous democracy in the world. Bounded by the Indian Ocean on the south, the Arabian Sea on the southwest, and the Bay of Bengal on the southeast, it shares land borders with Pakistan to the west; China, Nepal, and Bhutan to the north; and Bangladesh and Myanmar to the east. In the Indian Ocean, India is in the vicinity of Sri Lanka and the Maldives; its Andaman and Nicobar Islands share a maritime border with Thailand, Myanmar and Indonesia.

Please see our Local communities in India pages, where of course you can share any more information you may have about local sustainability initiatives.

River March, movement which seeks to "rejuvenate our rivers by striving to free them from encroachments, save remaining mangroves and contribute a non-polluted green environment." Mumbai

Centre for Sustainable Agriculture, professional resource organization engaged in establishing models of sustainable agriculture working in partnership with NGOs and Community Based Organizations by scaling up the successes and engaging with the establishment for a policy change - Open Source Seeds, csa-india.org - Mumbai Port Trust terrace garden - Solar cooking resources in India

Give Me Trees Trust (also known as pedo ka aashram or monastery of trees) is a Delhi-based NGO working to plant trees with the help of community volunteers. It was founded by Peepal Baba in 1977 and registered in 2011. The Trust has planted over 20 million trees, out of which 12.5 million are Peepal and Neem trees. The trust has around 10,000 volunteers who have planted trees in multiple regions including Uttar Pradesh, Punjab, Delhi NCR, Haryana, Maharashtra, Jammu and Kashmir, Himachal Pradesh and Rajasthan.

— From Wikipedia:Give Me Trees Trust

Wikipedia: Gurgaon, Raahgiri Day: The city of Gurgaon organizes Raahgiri Day every Sunday and is modeled after Ciclovía, an event that began in Bogota, Colombia in 1976, which closes streets to cars and opens them for the exclusive use of people for running, cycling, skating, or other recreational activities. It is a concept adopted by several cities around the world. Gurgaon is the first and only city in India to hold this event. Launched in November 2013, over 2,00,000 people have participated in this event since then. Raahgiri Day is organized by a team of NGOs and citizens' groups. The NGOs associated with the event are Peddal Yatri, India Cycle Service, EMBARQ India, I am Gurgaon and Road Safety Officers.