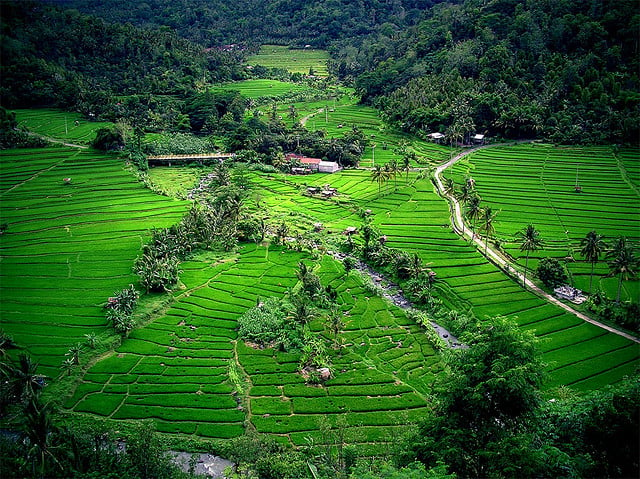 Indonesia ( (listen) IN-də-NEE-zhə), officially the Republic of Indonesia (Indonesian: Republik Indonesia [reˈpublik ɪndoˈnesia] (listen)), is a transcontinental country in Southeast Asia and Oceania between the Indian and Pacific oceans. It consists of over seventeen thousand islands, including Sumatra, Java, Sulawesi, and parts of Borneo and New Guinea. Indonesia is the world's largest island country and the 14th-largest country by area, at 1,904,569 square kilometres (735,358 square miles). With about 270 million people, Indonesia is the world's fourth-most populous country and the most populous Muslim-majority country. Java, the world's most populous island, is home to more than half of the country's population.

Indonesia is a presidential, constitutional republic with an elected legislature. It has 34 provinces, of which five have special status. The country's capital, Jakarta, is the world's second-most populous urban area. Indonesia shares land borders with Papua New Guinea, East Timor, and the eastern part of Malaysia. Other neighbouring countries shares a maritime border with Singapore, Vietnam, the Philippines, Australia, Palau, and India (Andaman and Nicobar Islands). Despite its large population and densely populated regions, Indonesia has vast areas of wilderness that support one of the world's highest levels of biodiversity.

In 2020, "Indonesia will begin integrating the recommendations from its new Low Carbon Development Initiative into its 2020-2024 national development plan." Mangrove protection and restoration will play an important role in meeting the goal of cutting greenhouse gas emissions by over 43 percent by 2030. W

From Wikipedia:Climate change in Indonesia

Climate change in Indonesia is of particular significance, because its enormous coastal population is particularly at risk to sea level rise and because the livelihoods of so many of its people depend on agriculture, mariculture and fishing, all of which could be severely impacted by temperature, rainfall and other climatic changes. Some environmental issues in Indonesia such as the cutting of mangrove forests (i.e. in Java) to make room for fish farms further worsen the effects of climate change (i.e. sea level rise). In 2019 Indonesia is estimated to have emitted 3.4% of world greenhouse gas emissions: from deforestation, peatland fires, and fossil fuels.

From Wikipedia:Environmental issues in Indonesia

Environmental issues in Indonesia are associated with the country's high population density and rapid industrialisation, and they are often given a lower priority due to high poverty levels, and an under-resourced governance.

Issues include large-scale deforestation (much of it illegal) and related wildfires causing heavy smog over parts of western Indonesia, Malaysia and Singapore; over-exploitation of marine resources; and environmental problems associated with rapid urbanisation and economic development, including air pollution, traffic congestion, garbage management, and reliable water and waste water services.

Deforestation and the destruction of peatlands make Indonesia the world's third largest emitter of greenhouse gases. Habitat destruction threatens the survival of indigenous and endemic species, including 140 species of mammals identified by the World Conservation Union (IUCN) as threatened, and 15 identified as critically endangered, including the Sumatran orangutan.

Green Coast II in Aceh, for nature and people after the tsunami - Greenomics Indonesia - Wikipedia: Deforestation in Indonesia

From Wikipedia:Deforestation in Indonesia § Conservation efforts

Efforts to curb global climate change have included measures designed to monitor the progression of deforestation in Indonesia and incentivise national and local governments to halt it. The general term for these sorts of programs is Reducing emissions from deforestation and forest degradation (REDD). New systems to monitor deforestation are being applied to Indonesia. One such system, the Center for Global Development's Forest Monitoring for Action platform currently displays monthly-updated data on deforestation throughout Indonesia.

Deforestation in Indonesia involves the long-term loss of forests and foliage across much of the country; it has had massive environmental and social impacts. Indonesia is home to some of the most biologically diverse forests in the world and ranks third in number of species behind Brazil and the Democratic Republic of Congo.

As late as 1900, Indonesia was still a densely forested country: forests represented 84 percent of the total land area. Deforestation intensified in the 1970s and has accelerated further since then. The estimated forest cover of 170 million hectares around 1900 decreased to less than 100 million hectares by the end of the 20th century. In 2008, it was estimated that tropical rainforests in Indonesia would be logged out in a decade. Of the total logging in Indonesia, up to 80% is reported to be performed illegally.

Large areas of forest in Indonesia have been cleared by large multinational pulp companies, such as Asia Pulp and Paper, and replaced by plantations. Forests are often burned by farmers and plantation owners. Another major source of deforestation is the logging industry, driven by demand from China and Japan. Agricultural development and transmigration programs moved large populations into rainforest areas, further increasing deforestation rates.

Logging and the burning of forests to clear land for cultivation has made Indonesia the world's third largest emitter of greenhouse gases, behind China and the United States. Forest fires often destroy high capacity carbon sinks, including old-growth rainforest and peatlands. In May 2011, Indonesia declared a moratorium on new logging contracts to help combat this. This appeared to be ineffective in the short-term, as the rate of deforestation continued to increase. By 2012 Indonesia had surpassed the rate of deforestation in Brazil, and become the fastest forest clearing nation in the world.