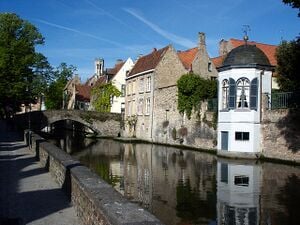 Belgium, officially the Kingdom of Belgium, is a country in Western Europe. It is bordered by the Netherlands to the north, Germany to the east, Luxembourg to the southeast, France to the southwest, and the North Sea to the northwest. It covers an area of 30,689 km2 (11,849 sq mi) and has a population of more than 11.5 million, making it the 22nd most densely populated country in the world and the 6th most densely populated country in Europe, with a density of 376 per square kilometre (970/sq mi). The capital and largest city is Brussels; other major cities are Antwerp, Ghent, Charleroi, Liège, Bruges, Namur, and Leuven.

Sing for the climate

The Gordelroute is a permanent cycle route encircling Brussels, based on De Gordel. It does not follow the same route as that used in the event, mainly following quieter roads and cycle paths, but is approximately the same distance (100 km).

Villo! (a portmanteau of the French words "Ville" (City) and "Vélo" (Bicycle)) is a public bicycle rental programme in Brussels-Capital Region, Belgium.

It was launched on 19 May 2009 in cooperation between the Brussels-Capital region and the company JCDecaux as a replacement of the former scheme Cyclocity, launched in 2006.

The scheme is currently in its second phase of expansion which will see a system of 5,000 bikes in all of the municipalities of the Brussels region by 2013, making it one of the biggest in the world.

BrusselsTogether, "lets you create a virtual association so that you can get started in no time and focus on what you want to do to improve Brussels"

Plasticfree options in Brussels, July 2015, Yes! my life is plasticless

Jong Groen (English, Young Green) is the youth organisation of Groen, the Green party in Flanders and Brussels.

The launch of bicycle parking initiatives in Belgium and the Netherlands, (date not found) [2]

Citizen Spring: The new movement connecting social enterprises across Brussels and Antwerp, May 19 [3]

A dazzlingly delicious taste of the future in Liége, Mar 27 [4]

One-minute manifesto: give Brussels back its river – video, June 6 [13]

Brussels is one of the most 'passive' cities in Europe and soon to be the home of the two largest passive buildings in the continent, March 19 [14]