Air pollution is a chemical, particulate matter, or biological agent that modifies the natural characteristics of the atmosphere.

Worldwide air pollution is responsible for large numbers of deaths and cases of respiratory disease[1]. While major stationary sources such as power plants are often identified with air pollution, the greatest source of emissions is actually mobile sources, mainly automobiles.[2] Greenhouse gases such as carbon dioxide, which contribute to global warming, have recently gained recognition as pollutants and internationally laws are being developed to reduce these emissions.

Particulates are a major cause of respiratory problems - these can be reduced by: 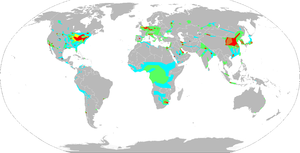 Number of deaths per million due to air pollution

Outdoor air pollution is one of the world's largest health and environmental problems – one that tends to worsen for countries as they industralize and transition from low to middle incomes.

Sources of outdoor or ambient air pollution are varied and include both natural and man-made ones. Natural outdoor air pollution includes oxides of sulphur and nitrogen from volcanoes, oceans, biological decay, lightning strikes and forest fires, VOCs and pollen from plants, grasses and trees, and particulate matter from dust storms. Natural pollution is all around us all of the time. However, sometimes concentrations can increase dramatically, for example after a volcanic eruption, or at the beginning of the growing season. Other sources include sulfur dioxide (SO2), carbon dioxide (CO2), Chlorofluorocarbons (CFCs), Smog, etc..

Page data
Retrieved from "https://www.appropedia.org/w/index.php?title=Air_pollution&oldid=631352"
Cookies help us deliver our services. By using our services, you agree to our use of cookies.
Categories:
Maintenance categories:
Comments
Privacy policy · About Appropedia · Disclaimers · Mobile view · Content is available under CC-BY-SA-4.0 unless otherwise noted.
</html