Carbon dioxide is formed by the complete combustion of carbon or compounds of carbon (principally the hydrocarbons). It is a greenhouse gas and one of the main drivers behind climate change.

Carbon dioxide is first a tri-atomic molecule {one atom of carbon and two of oxygen, yet it is not usually known as such}. Carbon dioxide is a compound (that is to say a Substance that is made up from more than one type of atom).

The molecule is linear and non-polar.

CO2 is made from two different types of Atoms - this is noted by the -ide suffix. In this case, diox- means two oxygens.

Oxygen needs to make and share two covalent chemical bonds to 'be happy'; Carbon needs to make four. This is to help explain the molecular formula O=C=O.

It is also produced by the reaction of carbonates or hydrogen carbonates with acids, and by heating carbonates (without water).

Chemical double bonds occur in many instances, starting with H2C=CH2 [ethylene] and O=C=O.

The phase [solid/liquid/gas/plasma phases] diagram for CO2 shows that at one Atmosphere [1 atm] of pressure CO2 has a freezing point temperature of -78.5 degrees C. CO2 like most substances contracts upon freezing.

However, upon thawing, CO2 sublimates - it trans-phases directly from Solid to Vapor.

The phase diagram also shows that The Triple Point of CO2 [where solid, liquid and gaseous States (phases) may co-exist] 'occurs' at 5.11 atm and at -56.6 degrees C. In this case, this means that CO2 cannot be a Liquid below 5.11 atm. 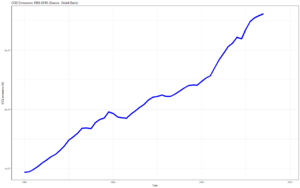 This is due to human activity, releasing carbon underground trapped in fossil fuels.

There are other chemical atmospheric discharges that are more actively greenhouse gases than carbon, yet the effects of these are 'side-lined' when put up against our incessantly increasing deposition of CO2 - into Our One and Only Paper Thin Atmosphere.