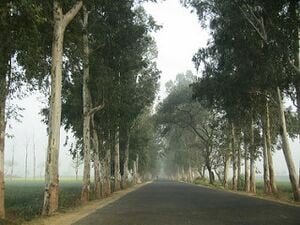 This article focuses on information specific to India. Please see our Climate action page for a topic overview.

From Wikipedia:Climate change in India § Activism

There have been school strikes for climate organised by activists such as Disha Ravi.

Tribal people in India's remote northeast planned to honor former U.S. Vice President Al Gore in 2007 with an award for promoting awareness on climate change that they say will have a devastating impact on their homeland.

Meghalaya- meaning 'Abode of the Clouds' in Hindi—is home to the towns of Cherrapunji and Mawsynram, which are credited with being the wettest places in the world due to their high rainfall. But scientists state that global climate change is causing these areas to experience an increasingly sparse and erratic rainfall pattern and a lengthened dry season, affecting the livelihoods of thousands of villagers who cultivate paddy and maize. Some areas are also facing water shortages.

People are becoming aware of ills of global warming. Taking initiative on their own people from Sangamner, Maharashtra (near Shirdi) have started a campaign of planting trees known as Dandakaranya- The Green Movement. It was started by visionary & ace freedom fighter the late Shri Bhausaheb Thorat in 2005. To date, they have sowed more than 12 million seeds & planted half a million plants.

From Wikipedia:Climate change in India

Climate change in India is having profound effects on India, which is ranked fourth among the list of countries most affected by climate change in 2015. India emits about 3 gigatonnes (Gt) CO2eq of greenhouse gases each year; about two and a half tons per person, which is less than the world average. The country emits 7% of global emissions, despite having 17% of the world population. Temperature rises on the Tibetan Plateau are causing Himalayan glaciers to retreat, threatening the flow rate of the Ganges, Brahmaputra, Yamuna and other major rivers. A 2007 World Wide Fund for Nature (WWF) report states that the Indus River may run dry for the same reason. Heat waves' frequency and power are increasing in India because of climate change. Severe landslides and floods are projected to become increasingly common in such states as Assam.

According to some current projections, the number and severity of droughts in India will have markedly increased by the end of the present century.