From Appropedia
Redirected from Pakistan 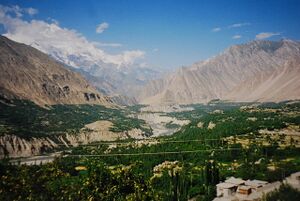 Pakistan, officially the Islamic Republic of Pakistan, is a country in South Asia. It is the world's fifth-most populous country, with a population of almost 242 million, and has the world's second-largest Muslim population. Pakistan is the 33rd-largest country by area, spanning 881,913 square kilometres (340,509 square miles). It has a 1,046-kilometre (650-mile) coastline along the Arabian Sea and Gulf of Oman in the south, and is bordered by India to the east, Afghanistan to the west, Iran to the southwest, and China to the northeast. It is separated narrowly from Tajikistan by Afghanistan's Wakhan Corridor in the north, and also shares a maritime border with Oman.

Pakistan is one of the countries who are most affected by the climate change. Around 135,000 deaths per year are associated to climate change. But Pakistan's Government and the people seem to have realised this fact and have taken some major appreciable steps to reduce the pollution and counter the climate change. In this cause, Pakistan has initiated World's largest solar energy project in Sindh province. Pakistan planted around 1.5 Billion trees from 2013-2018 in the province of Khyber Pakhtun Khuwa under the new provincial Government of Imran khan's PTI. Recently in 2018, Imran Khan's PTI won General Election and came to power in the Federal Government. This newly developed Government has also initiated a project to plant 10 Billion trees across Pakistan in an attempt to curb climate change.

The flora and fauna of Pakistan suffer from a number of problems. Pakistan has the second-highest rate of deforestation in the world. This, along with hunting and pollution, is causing adverse effects on the ecosystem. The government has established a large number of protected areas, wildlife sanctuaries, and game reserves to deal with these issues. [1]

Sarhad Rural Support Programme, the largest Non Government Organization working to alleviate poverty in North West Pakistan. It was established in 1989 with the aim of reducing poverty and ensuring sustainable means of livelihood in what is now Khyber Pakhtunkhwa, Pakistan. SRSP is part of the Rural Support Programmes initiated by United Nations Environment Programme Global 500 Award winner Shoaib Sultan Khan. It is now the largest regional RSP, with extensive outreach into communities. In recent years because of its vast outreach, SRSP has had to play a prominent role in disasters that have hit Khyber Pakhtunkhwa. As a result humanitarian work along with development has become a core competency of the organization. W

How the residents of Shimshal are setting a shining example for Pakistan, January 28 [6]

Pakistan Now Has A 21-Person ‘Climate Council,’ Thanks To A Judge’s Ruling, October 7 [7]

Pakistan: 'son, you brought electricity to the village and added 15 years to my life', June 12 [9]

Pakistan’s First Solar Project Is One Of The World’s Largest, May 13 [10]