From Appropedia
Redirected from Philippines 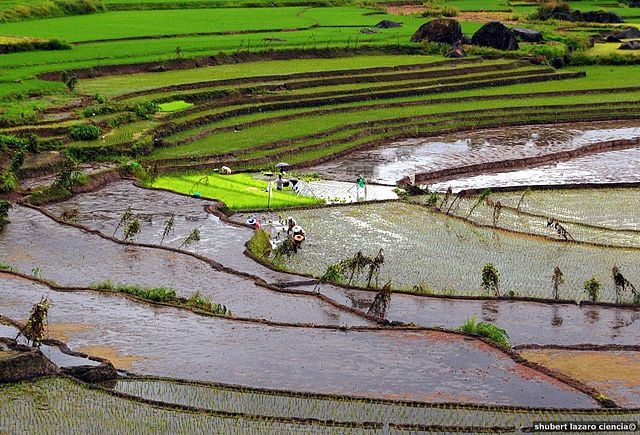 The Philippines ( (listen); Filipino: Pilipinas), officially the Republic of the Philippines (Filipino: Republika ng Pilipinas), is an archipelagic island country in Southeast Asia. It is situated in the western Pacific Ocean, and consists of about 7,640 islands, that are broadly categorized under three main geographical divisions from north to south: Luzon, Visayas, and Mindanao. The Philippines is bounded by the South China Sea to the west, the Philippine Sea to the east, and the Celebes Sea to the southwest, and shares maritime borders with Taiwan (Republic of China) to the north, Japan to the northeast, Palau to the east and southeast, Indonesia to the south, Malaysia and Brunei to the southwest, Vietnam to the west, and mainland China to the northwest. The Philippines covers an area of 300,000 km2 (120,000 sq mi) and, as of 2020, had a population of around 109 million people, making it the world's twelfth-most populous country. The Philippines is a multinational state, with diverse ethnicities and cultures throughout its islands. Manila is the nation's capital, while the largest city is Quezon City, both lying within the urban area of Metro Manila.

Negritos, some of the archipelago's earliest inhabitants, were followed by successive waves of Austronesian peoples. Adoption of Animism, Hinduism and Islam established island-kingdoms called Kedatuans, Rajahnates and Sultanates. The arrival of Ferdinand Magellan, a Portuguese explorer leading a fleet for Spain, marked the beginning of Spanish colonization. In 1543, Spanish explorer Ruy López de Villalobos named the archipelago Las Islas Filipinas in honor of Philip II of Spain. Spanish settlement through Mexico, beginning in 1565, led to the Philippines becoming part of the Spanish Empire for more than 300 years. During this time, Catholicism became the dominant religion, and Manila became the western hub of trans-Pacific trade. In 1896, the Philippine Revolution began, which then became entwined with the 1898 Spanish–American War. Spain ceded the territory to the United States, while Filipino rebels declared the First Philippine Republic. The ensuing Philippine–American War ended with the United States establishing control over the territory, which they maintained until the Japanese invasion of the islands during World War II. Following liberation, the Philippines became independent in 1946. Since then, the unitary sovereign state has often had a tumultuous experience with democracy, which included the overthrow of a dictatorship by the People Power Revolution.

From Wikipedia:Wildlife of the Philippines

The wildlife of the Philippines includes a significant number of endemic plant and animal species. The country's surrounding waters reportedly have the highest level of marine biodiversity in the world. The Philippines is considered one of the seventeen megadiverse countries as well as global biodiversity hotspot. In the 2000 Red List of the International Union for the Conservation of Nature and Natural Resources (IUCN), 418 of the country's 52,177 species were listed as threatened.

The Philippines has among the highest rates of discovery in the world with sixteen new species of mammals discovered in the last ten years. Because of this, the rate of endemism for the Philippines has risen and likely will continue to rise.

Why the world is looking to the Philippines for climate justice, Feb 22 [3]

1076 cities and municipalities turned their lights off during Earth Hour in the Philippines,[7] April 6

Philippines: Helping flood victims through social media,[8] September 28. Social networking sites and services like Facebook and Twitter were also flooded with news accounts, reports, photos and videos of Ondoy's aftermath. The stream of information soon became a "hub" for coordinating rescue and relief efforts for those who had access to the internet.