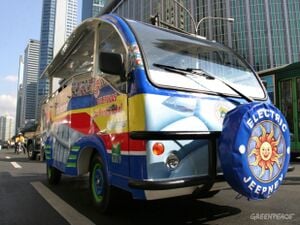 The Electric Jeepney (E-Jeepney) is a recent development in the Philippines that provides a sustainable, clean form of public transportation.

As the U.S. withdrew from the Philippines after World War II, a large number of jeeps were sold or given to Filipinos. WWI and II destroyed the country's public transportation system and soon, Filipinos began to modify jeeps into a sort of minibus to accommodate more passengers and shelter them with a roof.

Today, the Jeepney is a symbol of Filipino pop culture. They are often painted in bright, flamboyant colors and feature lights, loud horns and large, ornate hood ornaments. The government began to regulate Jeepney transportation once it established itself as a functional, inexpensive way of public transportation.[1] 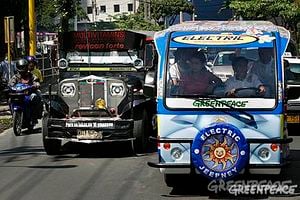 An E-Jeepney drives next to an older, regular Jeepney. Photo by Luis Liwanag/ Greenpeace.

Jeepney evolution can be broken down into different generations. Second generation Jeepneys have air conditioning, refurbished engines and more space for passengers. They are known for being noisy, garish and pollutant.

Jeepneys fueled by liquid petroleum gas (LPG) were the first of these vehicles to switch over to cleaner energy. LPG Jeepneys are rare, however their emissions are much lower than those of earlier generations.

A 16-passenger jeepney uses the same amount of fuel as a 54-passenger bus. Jeepneys have proven to be uneconomical as well as dangerous to the environemnt and public health because of the large amount of smog that they produce. That and rising gas prices led to the development of the E-Jeepney, or electronic Jeepney, a project largely funded by Green Peace International and Green Independent Power Producers, Inc (GRIPP). An E-Jeepney can run for 120 to 140 kilometers on a single charge at an average speed of 40 kilometers per hour[2]

It is the first public transportation system of its kind in south-east Asia.[3]

E-Jeepney developers have tightened control on graphic design and paint jobs to ensure that the art will represent the lives of the average Filipino, using national symbols and imagery to keep the feeling of this new technology relevant to the people it serves.

The E-Jeepney's batteries recharge using power from biodegradable waste. Many of the body parts are made locally, however the engine is imported.[4]

Compared with traditional jeepney, E-jeepney is more cost-effective; has 87% lower greenhouse gas (GHG) emissions; does not produce smog; reduces air pollution and its associated health effects; and is more preferred by the majority of the riding public due to its safety, environment-friendly, and comfortable ride.[5] 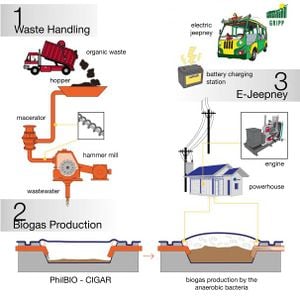 Current riders can use E-Jeepneys on select routes through Manila for free under the Climate Friendly Cities program by the Institute for Climate and Sustainable Cities. This program uses three approaches to the E-Jeepneys to help keep transportation sustainable:

Current plans call for a fleet of 50 E-Jeepneys to cruise the streets of Manila and its incorporated cities. Local officials and international organizations like Green Peace leave open the possibility of a larger number of E-Jeepneys in the future.

Makati City, outside of the capital city Manila, has emerged as a hub of Jeepney development and testing. E-jeepneys will continue to roll out in other urban centers like Baguio, Puerto Princesa and Bacolod.[4] City government in Makati City will draft a new transportation master plan to address traffic and pollution. The plan will include an increased number of E-Jeepneys on new routes.[7]

Page data
Retrieved from "https://www.appropedia.org/w/index.php?title=Electric_Jeepney&oldid=646903"
Cookies help us deliver our services. By using our services, you agree to our use of cookies.
Categories:
About Appropedia · Policies · Contact · Content is available under CC-BY-SA-4.0 unless otherwise noted.