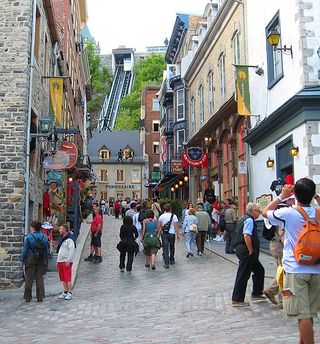 Please see our Local communities in Canada pages, where of course you can share any more information you may have about local sustainability initiatives.

Climate change in Canada has had large impacts on the country's environment and landscapes. The number of climate change-related events, such as the 2013 Alberta Floods, and an increase in the number of forest fires has become an increasing concern over time. Canada's annual average temperature over land has warmed by 1.7 degrees Celsius since 1948. The rate of warming is even higher in Canada's north, the Prairies, and northern British Columbia. The country's precipitation has increased in recent years and extreme weather events have become more common.

Canada is currently the world's 7th largest greenhouse gas emitter, and has a long history of producing industrial emissions going back to the late 19th century. In 2019 transport and oil and gas extraction together emitted over half of the total. Canada's fossil fuel extraction industry has increased its greenhouse gas emissions by 21.6% since 1990.

Canada is committed to reducing its greenhouse gas (GHG) emissions by 30% below 2005 levels by 2030 under the Paris Agreement. Several climate change mitigation policies have been implemented in the country, such as carbon pricing, emissions trading and climate change funding programs. In 2019, the House of Commons voted to declare a national climate emergency in Canada.

— From Wikipedia:Climate change in Canada

Delivering Community Power, Canadian Union of Postal Workers plan to turn every post office in Canada into a hub for a just green transition. [1]

For thousands of years, Inuit communities in far northern Canada lived seminomadically, surviving off of whatever wild game they could hunt. But starting in the mid-20th century, climate change, colonialism, and economic changes had a devastating impact on people in places like Aklavik. Caribou herds shrank and migration patterns changed. The Inuit were forcibly resettled in prefabricated towns and their sled dogs culled by authorities. As demand for seal and fox furs fell and resettlement accelerated, hunters were forced into employment or into nine-to-five jobs, reducing both time and money for hunting.

With fewer hunters, food had to be flown in at exorbitant prices — as much as $38 for a bag of grapes that would cost only a few dollars in the south. As a result, the Aklavik Hunters' and Trappers' Committee and several other groups across the Arctic have established community fridges, where hunters or people who have been fishing drop off surplus meat. The hunters are reimbursed for certain fees and the food is distributed to people in need, following a centuries-old Inuit tradition of delivering one's surplus catch to the elderly and isolated. Canada's largest Inuit advocacy group, the Inuit Tapiriit Kanatami, has launched a food security mapping project to track similar initiatives across the Arctic. [2] Aklavik Hunters and Trappers Committee – Community Harvesters, itk.ca

8-80 Cities, Canadian based non-profit organization with an international outlook, promote walking and bicycling as activities and urban parks, trails and other public spaces as great places for ALL.

Great Lakes Commons, a grassroots effort to establish the Great Lakes as a thriving, living commons — shared and sacred waters that we all protect in perpetuity.

Ecojustice Canada, Canadian non-profit environmental law organization that provides funding to lawyers to use litigation to defend and protect the environment. W

Land-use planning in Canada: whose land is it anyway? Richard Shearmur, Jun 30 [3]

A Toolkit for Establishing a Great Lakes Commons, Sep 18 [10]

Meet the First Nation Above the Arctic Circle That Just Went Solar, Mar 28 [13]

The Leap Manifesto: A Call for Caring for the Earth and One Another, September 15 [19]

High-volume fracking to be banned in Nova Scotia, September 3 [20]

Canada should be doing more to fight income inequality, March 17 [21]

May 26 Bike Day in Canada is about bringing together the public, cycling organizations and members of all three levels of government across Canada, to ride on the same day. The day is dedicated to highlighting the importance of cycling in Canada as a healthy, affordable and environmentally friendly form of physical activity, transportation and tourism. [22]