From Appropedia
Redirected from Quebec 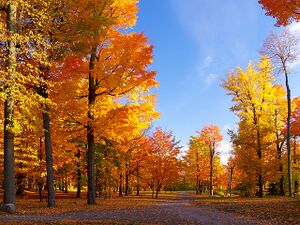 The Wildlife Foundation of Quebec and the Data Centre on Natural Heritage of Quebec (CDPNQ)(French acronym) are the main agencies working with officers for wildlife conservation in Quebec. W

Bixi Montreal - Vélo Québec, non-profit organization, which encourages the use of bicycles - whether for recreation, tourism or as a clean, active mode of transportation - in order to improve the environment, health and wellbeing of citizens.

The Route Verte (in English, the "Green Route," or the "Greenway") is a network of bicycling and multiuse trails and designated roads, lanes, and surfaces, spanning 5,034 kilometres (3,128 mi) as of October 31, 2013, in the Canadian province of Quebec, inaugurated on August 10, 2007. The trail network includes both urban trails (for example, in and around the city of Montreal) and cycling routes into quite isolated areas in the north, as well as along both sides of the Saint Lawrence River, out to the Gaspésie region, and on the Îles de la Madeleine, linking more than 320 municipalities along the way. The Route Verte is not entirely composed of trails, as nearly 61% of the network actually consists of on-road surfaces, whether regular roads with little traffic, wide shoulders, special lanes on highways, or otherwise. The segregated trails are mostly rail trails shared-use with hikers and other users.

The Collectif de Minuit, based at Université Laval in Québec City, operates with a similar ethos to the G-Spot — providing healthy, vegan, home-cooked meals on a pay-what-you-can basis to harassed and cash-strapped students.

The main difference is where the food is sourced — much of it comes from the dumpsters outside Québec City's Marché du Vieux-Port farmers' market and the dumpsters of other grocery stores, where vegetables and herbs that are left unsold or that don't meet quality standards are often thrown. The vegetables are thoroughly washed with vinegar and often boiled into stews before finding their way onto the plates of hungry students every Wednesday morning. [1] Collectif de Minuit on facebook

For more than a century, the vast Catholic church in the heart of Québec City's St-Roch neighborhood has been a gathering place for the neighborhood's residents, many of them poor, elderly, or at risk of homelessness. Every summer, a self-service "food fridge" makes its appearance on the church steps, stocked by volunteers and community members who stop by and drop off leftovers. The fridge was established by four university students.

"At first, I wondered what it was doing there," one local resident told the daily newspaper Le Soleil, in 2016. "It's great. You find meat, fruit and vegetables." The man, who began stopping by regularly for food when money was tight, has since become a volunteer with the project. Local restaurant and grocery store owners have also pitched in, dropping off unsold surplus food at the end of the day. [2]

A unique food-sharing initiative has sprouted on the roof of the Maison de Lauberivière, Québec City's largest homeless shelter. Urbainculteurs, a volunteer collective dedicated to the promotion of urban gardening, started the rooftop garden in 2009. The cabbage, carrots, beans, seasonal fruits, and herbs— more than a ton of production each year — find their way downstairs, into the hands of the chefs who cook three meals a day for hundreds of homeless men and women. The garden is maintained by a group of volunteers including shelter residents, college students, retirees and the occasional school group. Excess plants and seeds are sold to local gardeners on occasional "open roof days."

"They [the Urbainculteurs] saw an empty roof, and our cooks saw a need for fresh vegetables," says Frédéric Lapointe, clinical services co-ordinator at the shelter. "The garden is something that's dear to our hearts." After eight years above the shelter, the garden is currently seeking a new home due to renovations at Lauberivière. Urbainculteurs members also run a free summer garden in front of Quebec’s National Assembly. [3] Lauberivière urbainculteurs.org

Are you looking for a sewing machine? How about a toaster? Are you trying to get rid of your kids' old toys or of that clunky shelving unit in your bedroom? Look no further than the Facebook group As-tu ça toi? ("Do you have that?"). Montrealer Marie-Neige Châtelain launched the group in 2011, and it now has over 46,000 members. It operates like any online classifieds group, except, as the organizers point out, "Any ads that mention (dollars) will be deleted without prior notice!" Everything is free, members organize pickups between themselves, and as long as it doesn’t involve live animals, illegal products or medical supplies, no request is too strange. The group has spawned "daughter groups" in nearly every region of Quebec. "These communities are based on the love of giving, be it donations of material goods or simple exchanges of services," Châtelain writes. "Give without expecting anything in return, and you'll get everything." [4]

Established in 2002 in Quebec City, the Accorderie network is used for free service exchanges. Are you looking for someone to tutor you in a second language or repair your computer? Can you spare an hour to teach a skill or help someone do home repairs? Give one hour of your time and add an hour to your own "time bank" to use for something completely different. The network has three branches in Montreal, as well as outposts in Sherbrooke, Trois-Rivières, Shawinigan, and several rural North Coast communities.

"We want to fight poverty and exclusion, create links between neighbors and recreate a sense of community that has been kind of lost over the years," says Les Accorderies' director Huguette Lépine. [5]

Worker-owned forestry enterprises in the North, paramedic coops and the sheer number of worker-owners place Québec in the company of other coop strongholds like the Basque region of Spain and Emilia-Romagna in Northern Italy. In fact, there are over 7,000 coops and nonprofit businesses in Quebec employing over 150,000 people and generating over $17 billion in sales. [6]

The definition of Social Economy used by the Chantier de l'économie sociale in Quebec follows: The Social Economy is made up of association-based economic activities founded on values of:

La Ruche — "The Hive" — is a Quebec-only crowdfunding platform run by a nonprofit. All projects are reviewed by a selection committee and only allowed to solicit funds if they will have a "positive social, economic, or cultural" impact on their community. At regional meetings, known as "cellules," participants get a chance to pitch their project to public figures who are well-known and well-connected in the fields of social justice, business, and the performing arts. Workshops, part of the La Ruche Académie program, help promoters refine their pitches. La Ruche stands out for its nonprofit structure, one-on-one assistance for participants, and regional outlook. Some current projects that are being funded by La Ruche Montréal include the production of choral music in Braille, subsidized self-defense courses for children, and an independent, zero-waste organic grocery startup. [7]

It all starts with food: How co-ops are transforming Quebec’s food deserts, Apr 7 [8]

What Quebec Can Teach Us About Creating a More Equitable Economy, Apr 11 [9]