From Appropedia
Redirected from Italy 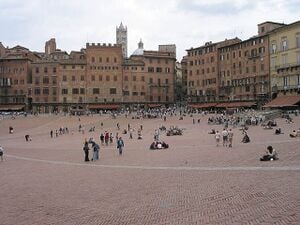 Italy, officially the Italian Republic is a country consisting of a peninsula delimited by the Alps and surrounded by several islands. Italy is located in south-central Europe, and is considered part of western Europe. A unitary parliamentary republic with Rome as its capital, the country covers a total area of 301,340 km2 (116,350 sq mi) and shares land borders with France, Switzerland, Austria, Slovenia, and the enclaved microstates of Vatican City and San Marino. Italy has a territorial enclave in Switzerland (Campione) and a maritime exclave in Tunisian waters (Lampedusa). With around 60 million inhabitants, Italy is the third-most populous member state of the European Union. W

wikipedia:LIPU, the Lega italiana protezione uccelli (En. "Italian League for Bird Protection") is an Italian charitable organisation, founded in 1965 and devoted to the protection of the country's wildlife with a particular focus on birds. It has a membership of 42,000 and is the Italian partner of Birdlife International.

The Central Apennines are characterized by a rich diversity of ecosystems and therefore also wildlife species. The work of Rewilding Europe and its partners in Central Apennines focuses on developing large "coexistence corridors" by connecting the local economy with wilder nature in four corridors collectively covering more than 40,000 hectares.

In the protected areas, the Abruzzo and Majella National Parks and Sirente Velino Regional Park, the corridors are intended to benefit the wildlife populations, and the quality of nature and nature related experiences. The 10-year project's goal is to reduce bear mortality and conflict by installing traffic accident prevention measures, removing old fencing, restoring and improving signage, and distributing new mobile electric fences. Furthermore, Rewilding Europe and its partners work on supporting nature-based enterprises in and around corridor areas, and raising awareness about wildlife and nature conservation amongst local communities and people visiting the area is.

Parks.it, portal about parks in Italy

Four years ago, three residents were interested in taking care of a bench located in Piazza dei Colori in the suburbs of Bologna, Italy. They approached the city government, which fielded the request through five different departments, but it came to nothing. This is where the well-known "Regulation for the Care and Regeneration of the Urban Commons in Bologna" stems from — a thriving, citizen-led commons initiative. It now boasts more than 400 collaborative agreements for individuals and communities to work together to improve schools, public spaces, and more. This is what made a difference, what made Bologna win the Engaged Cities Award, an initiative underwritten by Bloomberg Philanthropies and promoted by the international non-profit organization Cities of Service.

Starting from one single need, one single bench to be cared for, the Bologna city government created a growing process for civic engagement. This includes the Civic Network, a public digital space where thousands of citizens have access to data or to voting, with almost 16,000 voters in the participatory budgeting project in 2017. It also includes INCREDIBOL, an initiative that has already given to creative communities access to around 35 premises and buildings owned by the Municipality of Bologna as well as the District Co-Design Laboratories and the Civic Imagination Office, that has so far organized 190 meetings and involved more than 6,000 people.

This year, participatory processes are happening in every district in Bologna, with regular public meetings and new community places. In the fields of culture, welfare, mobility, and sport, we find more and more projects where citizens are the promoters and the Bologna city administration is the enabling partner. What bonds all this is the Office for Civic Imagination, a multi-professional working group tasked with conceiving new solutions so that the city government can share the responsibility for the care of common spaces and places, for the sustainable use and the fair appreciation of local resources. The aim of this department is to manage relationships, find the necessary instruments for efficient co-production, and provide information.

At a time of disillusion toward institutions, many cities are building processes to enable citizens not only to take care of their own districts and cities, but also to be a partially governing force and figure out new solutions together. The scenario is still a little blurry, because of the continuous fight between those who have more capacities and resources and those with less, but there are examples of innovation in the urban democracy aiming at redistribution. Some cities invest resources to re-design the traditional models, trying to shift towards open and democratic co-design approaches. Urban space is often the source of contemporary conflicts, where forms of cooperation and extractive platforms assume new shapes. It's being aware of this tension, with citizens doing things, asking, demanding, and claiming their right to care for public spaces that makes Bologna a city that is able to regenerate in spite of the continuous conflict.[1]

Caffè sospeso is a tradition in the working-class cafés of Naples where a person who has experienced good luck financially pays for two coffees, but receives and consumes only one, the second being left until a person enquires later whether a sospeso is available.[2]

The Emilia Romagna region of northern Italy has more than 15,000 co-operatives, which contribute over one-third of the region's GDP.[3]

The city council of Capannori, adopted its zero-waste strategy in 2007. The first article sets out the ambitious goals: achieve a recycling rate of 75 percent by 2011 and zero waste by 2020. Using what experts call the "waste hierarchy," Capannori's policy makers identified 11 high-impact tactics to reduce waste. The strategy includes everything from a door-to door waste collection scheme to a "pay-as-you-throw" waste tariff. Two of the more innovative tactics include tax incentives for small retailers who sell products loose or on tap (food and liquids), and the operation of a municipal reuse center.

At the reuse center, slightly damaged clothes, electronic devices, toys, footwear, and more are repaired and then donated to people in need or sold at low prices. The center has also held free classes on upcycling techniques, from sewing to woodwork, since 2014. The results have been dramatic. According to a case study on Zero Waste Europe's website, the city reduced waste by 39 percent between 2004 and 2012, achieved an 82 percent recycling rate in 2013, and now hundreds of cities are following its example. As planned, most of the gains in waste reduction came from focusing on tactics high on the waste hierarchy, like prevention and reuse, rather than recycling — which is low on the hierarchy.[4]

Page data
Retrieved from "https://www.appropedia.org/w/index.php?title=Italy_community_action&oldid=668804"
Cookies help us deliver our services. By using our services, you agree to our use of cookies.
Categories:
About Appropedia · Policies · Contact · Content is available under CC-BY-SA-4.0 unless otherwise noted.