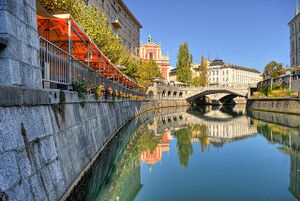 Slovenia, officially the Republic of Slovenia, is a nation state in southern Central Europe, located at the crossroads of main European cultural and trade routes. The capital and largest city is Ljubljana. W In 2014, Ljubljana won the European Green Capital Award for 2016 for its environmental achievements. W

BicikeLJ, Since May 2011, the BicikeLJ W, a self-service bicycle rental system offers the residents and visitors of Ljubljana 300 bicycles and 600 parking spots at 31 stations in the wider city center area. In 2015, Ljubljana placed 13th in a ranking of the world's most bicycle-friendly cities. W

Beyond a Construction Site

Slovenia is the third most forested country in Europe, with 58.5% of the territory covered by forests. The forests are an important natural resource, but logging is kept to a minimum, as Slovenians also value their forests for the preservation of natural diversity, for enriching the soil and cleansing the water and air, for the social and economic benefits of recreation and tourism, and for the natural beauty they give to the Slovenian landscape. W

Ljubljana, eighth most bicycle friendly city in the world, Jun 16 [2]

Slovenia adds water to constitution as fundamental right for all, Nov 18 [3]

How Ljubljana Remade Itself as Europe's 'Green Capital', February 1 [8]