From Appropedia
Redirected from Alberta 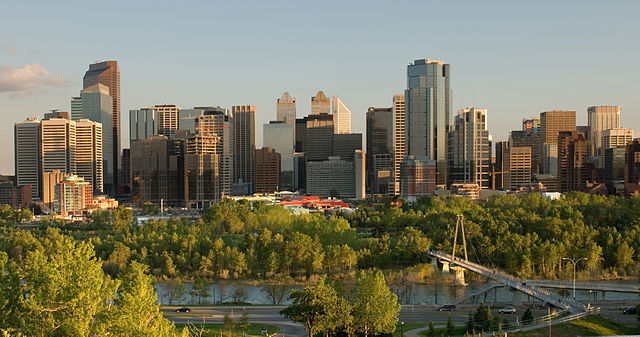 Alberta ( al-BER-tə) is one of the thirteen provinces and territories of Canada. It is part of Western Canada and is one of the three prairie provinces. Alberta is bordered by British Columbia to the west, Saskatchewan to the east, the Northwest Territories (NWT) to the north, and the U.S. state of Montana to the south. It is one of the only two landlocked provinces in Canada (Saskatchewan being the other). The eastern part of the province is occupied by the Great Plains, while the western part borders the Rocky Mountains. The province has a predominantly continental climate but experiences quick temperature changes due to air aridity. Seasonal temperature swings are less pronounced in western Alberta due to occasional chinook winds.

Alberta is the 4th largest province by area at 661,848 km2 (255,541 sq mi), and the 4th most populous, being home to 4,262,635 people. Alberta's capital is Edmonton, while Calgary is its largest city. The two are Alberta's largest census metropolitan areas. More than half of Albertans live in either Edmonton or Calgary, which contributes to continuing the rivalry between the two cities. English is the official language of the province. In 2016, 76.0% of Albertans were anglophone, 1.8% were francophone and 22.2% were allophone. 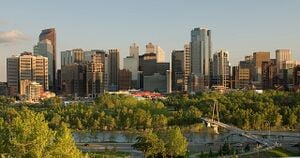 Starting in Oct 2012 a 56-member citizens' inquiry was commissioned by the city of Edmonton to help develop an energy transition plan. [1]

Bike Calgary is a member-based, non-profit organization based in Calgary, Alberta, Canada. With over 1,300 active members, it is the city’s largest advocacy group for utility cycling and active transportation.

Calgary Transit provides public transportation services throughout the city with regular bus service, bus rapid transit (BRT), and both metro- and tram-style light rail. Calgary's light metro system, known as the CTrain, was one of the first such systems in North America (behind Edmonton LRT). It currently consists of two lines (Red Line and Blue Line), with 44 stations and 58.2 km (36.2 mi) of track. Most of the network functions as a light metro, akin to a subway, while a smaller portion of the network in the downtown free-fare zone operates as an urban tramway with a dedicated right-of-way and higher density of stops. CTrain tracks run both underground and at surface-level, as well as on elevated guideways along certain segments. The Calgary LRT is one of the continent's busiest, carrying 270,000 passengers per weekday and approximately half of Calgary downtown workers take the transit to work. The CTrain is also North America's first and only rapid transit system to run on 100% renewable, wind-generated energy. In early 2020, city council approved construction of the Calgary Green Line, the third light rail line in the city's rapid transit network. It will be the first rail line in Calgary to operate low-floor trains and is the largest public works project in the history of Calgary, about three-and-a-half times bigger than the second-largest project.

From Wikipedia:Calgary § Pedestrian and cycling

As an alternative to the over 260 km (160 mi) of shared bikeways on streets, the city has a network of multi-use (bicycle, walking, rollerblading, etc.) paths spanning over 935 km (581 mi). The Peace Bridge provides pedestrians and cyclists, access to the downtown core from the north side of the Bow river. The bridge ranked among the top 10 architectural projects in 2012 and among the top 10 public spaces of 2012.

In the 1960s, Calgary started to develop a series of pedestrian bridges connecting many downtown buildings.

Today, these bridges connect between most of the city's downtown office towers and make up the world's most extensive skyway network (elevated indoor pedestrian bridges), officially called the +15. The system shields pedestrians from the city's extremely cold winter temperatures. The name derives from the fact that the bridges are usually 4.6 m (15 ft) above ground.

Another historic day in the battle to stop the tarsands, November 23 [3]