From Appropedia
Redirected from Vancouver 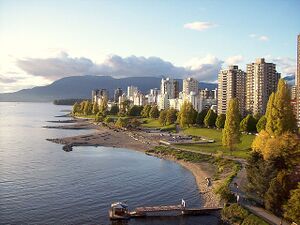 Vancouver ( (listen) van-KOO-vər) is a major city in western Canada, located in the Lower Mainland region of British Columbia. As the most populous city in the province, the 2021 census recorded 662,248 people in the city, up from 631,486 in 2016. The Greater Vancouver area had a population of 2.6 million in 2021, making it the third-largest metropolitan area in Canada. Greater Vancouver, along with the Fraser Valley, comprises the Lower Mainland with a regional population of over 3 million. Vancouver has the highest population density in Canada, with over 5,700 people per square kilometre, and fourth highest in North America (after New York City, San Francisco, and Mexico City).

From Wikipedia:Transportation in Vancouver § Cycling

Canadian census data shows that cycling mode share for the city is 3.7% as compared to 1.7% for the Metro Vancouver area. In neighbourhoods such as Point Grey, Kitsilano, Mount Pleasant and Grandview Woodlands the cycling mode share can be over 10%. Within the downtown core, the combined walking and cycling mode is as high as 50%.

From Wikipedia:Transportation in Vancouver § Cycling infrastructure

Vancouver is served by a network of over 300 lane-km of on- and off-road bicycle routes. Most of these routes are local street bikeways (also known as bike boulevards), streets that have extensive traffic calming measures such as traffic circles, and signal control to facilitate crossing of major roads. Neighbourhoods are encouraged to plant and care for the circles and boulevards and add public art along bike routes.

The SeaBus is a passenger-only ferry service in Metro Vancouver, British Columbia, Canada. It crosses Burrard Inlet to connect the cities of Vancouver (Waterfront station) and North Vancouver (Lonsdale Quay). Owned by TransLink and operated by the Coast Mountain Bus Company, the SeaBus forms an important part of the region's integrated public transportation system.

The Greenest City action plan (GCAP) is a City of Vancouver urban sustainability initiative. Its primary mission was to ensure that Vancouver would become the greenest city in the world by 2020. The GCAP originated based on the 2009 work of the Greenest City Action Team, a committee co-chaired by Vancouver mayor Gregor Robertson. The GCAP was approved by Vancouver city council in July 2011.

In May 2018, the Zero Waste 2040 Strategy was passed by Vancouver's city council. The city began work the same year on decreasing the amount of single-use items distributed in the city and stated its intention to ban these items by 2021 if businesses do not meet reduction targets. As part of the plan, a ban on plastic straws, polystyrene food packaging and free shopping bags was to go into effect in mid-2019.

Vancouverism is an urban planning and architectural phenomenon in Vancouver, British Columbia, Canada. It is characterized by a large residential population living in the city centre with mixed-use developments, typically with a medium-height, commercial base and narrow, high-rise residential towers, significant reliance on mass public transit, creation and maintenance of green park spaces, and preserving view corridors. The architect Bing Thom described Vancouverism this way:

It's a spirit about public space. I think Vancouverites are very, very proud that we built a city that really has a tremendous amount of space on the waterfront for people to recreate and to enjoy. At the same time, False Creek and Coal Harbour were previously industrial lands that were very polluted and desecrated. We've refreshed all of this with new development, and people have access to the water and the views. So, to me, it's thisidea of having a lot people living very close together, mixing the uses. So, we have apartments on top of stores. In Surrey we have a university on top of a shopping centre. This mixing of uses reflects Vancouver in terms of our culture and how we live together.

Vancouver has been repeatedly ranked among the most livable cities in the world. An article in San Francisco Planning and Urban Research Association has taken note of Vancouver's approach to new development and view corridors and asks if San Francisco should pursue similar direction. However, Vancouver's planning process has come under criticism for its unpredictability, lengthy approval process, lack of transparency, lack of public engagement, the repetitiveness of the built forms it produces, and the potential for the process to involve corruption.

Greenest City 2020, information from the City of Vancouver

In Vancouver, Shipping Containers are the New Tool Libraries, Jan 10[1]

Half of Vancouver trips being done by walking, cycling, transit: Officials, May 13[9]

Homelessness in Vancouver, British Columbia, Canada is a social crisis that has been rapidly accelerating over the last decade. According to the United Nations, homelessness can either be relative or absolute. Absolute homelessness describes people living in absence of proper physical shelter. Relative homelessness describes people living in poor conditions of health or security, including an absence of both personal safety and steady income despite having physical shelter to reside in. As of 2011, roughly 2,651 people in Vancouver are subject to one of these types of homelessness, or are transitioning between them. Homelessness as a social issue in Vancouver originated from federal funding cuts to affordable housing. After market housing increased, the cost of housing became one of Vancouver's main causes of homelessness, alongside lack of income. The homeless population in Vancouver is subjected to high amounts of crime-related victimization. There have been several approaches to reducing the homeless population in Greater Vancouver by the city and other organizations. As of 2011, the rate of homelessness in Vancouver has stopped increasing, but it is not being reduced either. British Columbia being the only province without a deadly winter season sees many migrate from other provinces.

Page data
Retrieved from "https://www.appropedia.org/w/index.php?title=Vancouver_community_action&oldid=657421"
Cookies help us deliver our services. By using our services, you agree to our use of cookies.
Categories:
About Appropedia · Policies · Contact · Content is available under CC-BY-SA-4.0 unless otherwise noted.