From Appropedia
Redirected from British Columbia 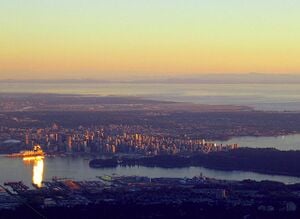 British Columbia (commonly abbreviated as BC; French: Colombie-Britannique) is the westernmost province of Canada, situated between the Pacific Ocean and the continental divide of the Rocky Mountains. With an estimated population of 5.2 million as of 2021, it is Canada's third-most populous province. The capital of British Columbia is Victoria, the fifteenth-largest metropolitan region in Canada, named for Queen Victoria, who reigned over the British Empire at the time of Confederation. The largest city is Vancouver, the third-largest metropolitan area in Canada, the largest in Western Canada, and the second-largest in the Pacific Northwest. In October 2013, Greater Vancouver had an estimated population of approximately 2.5 million. Since 2017, the province has been governed by the New Democratic Party, led by John Horgan, first with a minority government elected in 2017 and subsequently with a majority government elected in 2020.

About The People’s Apothecary, greentonguesapothecary.wordpress.com, "a project that brings together a community in the process of creating a sustainable herb garden commons."

This Canadian city is putting climate change warnings on its gas pumps, November 17 [3]