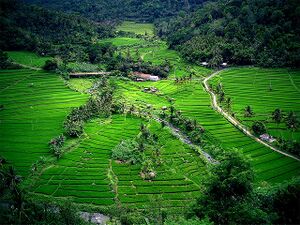 Indonesia has the world's 4th largest population and struggles with:

Please see our Local communities in Indonesia pages, where of course you can share any more information you may have about local sustainability initiatives.

Green Coast II in Aceh, for nature and people after the tsunami - Greenomics Indonesia - Wikipedia: Deforestation in Indonesia

How a Cooperative in Indonesia is Bridging the Digital Divide, May 4 [4]

In Indonesia, a new tool helps communities protect their land from fire, Mar 16 [7]

The indigenous community whose forest is their supermarket, October 28 [11]

Sumba Island was once one of poorest areas of Indonesia. That was before Sulis Setiawati came along, September 10 [12]

Indonesia to stop handing out permits for companies to chop down rainforests and drain peatlands for two years, but deal does not protect millions of hectares of rainforest,[16] May 27