From Appropedia
Redirected from Ghana 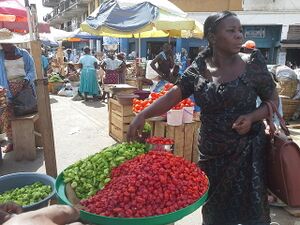 Ghana ( (listen); Twi: Gaana, Ewe: Gana), officially the Republic of Ghana, is a country in West Africa. It abuts the Gulf of Guinea and the Atlantic Ocean to the south, sharing borders with Ivory Coast in the west, Burkina Faso in the north, and Togo in the east. Ghana covers an area of 238,535 km2 (92,099 sq mi), spanning diverse biomes that range from coastal savannas to tropical rainforests. With nearly 31 million inhabitants (according to 2021 census), Ghana is the second-most populous country in West Africa, after Nigeria. The capital and largest city is Accra; other major cities are Kumasi, Tamale, and Sekondi-Takoradi.

The first permanent state in present-day Ghana was the Bono state of the 11th century. Numerous kingdoms and empires emerged over the centuries, of which the most powerful were the Kingdom of Dagbon in the north and the Ashanti Empire in the south. Beginning in the 15th century, the Portuguese Empire, followed by numerous other European powers, contested the area for trading rights, until the British ultimately established control of the coast by the late 19th century. Following over a century of colonisation, Ghana's current borders took shape, encompassing four separate British colonial territories: Gold Coast, Ashanti, the Northern Territories and British Togoland. These were unified as an independent dominion within the Commonwealth of Nations on 6 March 1957, becoming the first colony in West Africa to achieve sovereignty. Ghana subsequently became influential in decolonisation efforts and the Pan-African movement.

From Wikipedia:Climate change in Ghana § Mitigation and Adaptation

Ghana signed the Paris Agreement on 22 April 2016 and ratified on 21 September 2016. The first national climate change adaptation strategy in Ghana was developed to be implemented between 2010 and 2020. Adaptation seeks to lower the risks posed by the consequences of climate change. Adaptation measures may be planned in advance or put in place spontaneously in response to a local pressure such as afforestation, land rotation, building climate-resilient structures, solar powered infrastructure, etc. The Ministry of Environment Science, Technology and Innovation published a policy framework in 2013. In 2015, Ghana developed a framework entitled 'Ghana's Intended Nationally Determined Contribution' to outline a plan to reduce carbon emissions and to improve eternity of land use, transportation, and other economic and societal sectors.

From Wikipedia:Climate change in Ghana

Climate change in Ghana is impacting the people in Ghana in several ways as the country sits at the intersection of three hydro-climatic zones. Changes in rainfall, weather conditions and sea-level rise will affect the salinity of coastal waters. This is expected to negatively affect both farming and fisheries. The national economy stands to suffer from the impacts of climate change because of its dependence on climate sensitive-sectors such as agriculture, energy, and forestry. Moreover, access to freshwater is expected to become more challenging and reduced water supply will have a negative impact on hydropower, which provides 54% of the country's electricity capacity. Additionally, Ghana will likely see more cases of malaria and cholera, since both are impacted by changes in water conditions.

On 11 June 2021, Ghana inaugurated Green Ghana Day in an aim of planting 5 million trees in a concentrating effort to preserve the country's cover of rainforest to combat deforestation. W

"The Shea Economic Empowerment Program (SEEP)". This fruitful partnership centred on a community-based cooperative and international NGOs seeks to improve the livelihoods of women Shea nut producers by offering training, greater ownership within the supply chain and access to improved technology.

"G-lish: Income Generation, Re-Generation, Next Generation". The aim of this remarkable initiative of local NGOs is to provide value-added income for rural communities by crafting baskets from recycled materials. In doing so, they preserve the age-old basket-weaving tradition and carry out extensive tree-planting operations.

"High-value Syrup from 'Prekese' Fruits for Community Livelihood Empowerment". Relying on local raw materials, the partners of this promising initiative strive to establish the sustainable cultivation and harvesting of Prekese fruits in rural communities, allowing income to be generated over the whole life cycle of the tree.

"Ghana Bamboo Bikes Initiative" is a youth-led, non-profit enterprise committed to the economic empowerment of youth by taking advantage of the abundant bamboo raw materials in Ghana to manufacture and assemble high-quality bamboo bikes - suitable for the road conditions and terrain in Ghana and affordable to the poor.

Page data
Retrieved from "https://www.appropedia.org/w/index.php?title=Ghana_community_action&oldid=656218"
Cookies help us deliver our services. By using our services, you agree to our use of cookies.
Categories:
About Appropedia · Policies · Contact · Content is available under CC-BY-SA-4.0 unless otherwise noted.