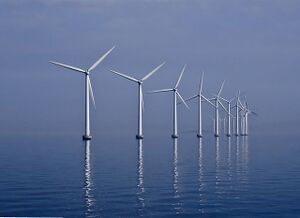 Community energy is considered here in the context of the wider topic of Sustainable energy.

Sustainable energy is defined, for the purposes of this article, as energy which, in its production or consumption, has minimal negative impacts on human health and the healthy functioning of vital ecological systems, including the global environment, and that can be supplied continuously to future generations on earth. Such forms of energy include, but are not limited to the following: solar thermal, solar photo-voltaic (PV), wind, hybrid wind-solar, fuel cell, geothermal, small-scale (mini- and pico-) hydro-electric, tidal and wave. This definition specifically excludes nuclear and fossil fuel energy or their "improvements" as an option thereof.[1]

Energy poverty is lack of access to modern energy services. It refers to the situation of large numbers of people in developing countries whose well-being is negatively affected by very low consumption of energy, use of dirty or polluting fuels, and excessive time spent collecting fuel to meet basic needs. It is inversely related to access to modern energy services, although improving access is only one factor in efforts to reduce energy poverty. Energy poverty is distinct from fuel poverty, which focuses solely on the issue of affordability.

According to the Energy Poverty Action initiative of the World Economic Forum, "Access to energy is fundamental to improving quality of life and is a key imperative for economic development. In the developing world, energy poverty is still rife. Nearly 1.6 billion people still have no access to electricity, according to the International Energy Agency (IEA).". As a result of this situation, a new UN initiative has been launched to coincide with the designation of 2012 as the International Year for Sustainable Energy for All, which has a major focus on reducing energy poverty. W 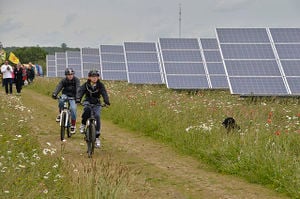 A community solar farm or garden is a solar power installation that accepts capital from and provides output credit and tax benefits to individual and other investors. In some systems you buy individual solar panels which are installed in the farm after your purchase. In others you purchase kW capacity or kWh of production. The farm's power output is credited to investors in proportion to their investment, with adjustments to reflect ongoing changes in capacity, technology, costs and electricity rates. Companies, cooperatives, governments or non-profits operate the farms.

Centralizing the location of solar systems has advantages over residential installation that include:

Conventional power stations, such as coal-fired, gas and nuclear powered plants, as well as hydroelectric dams and large-scale solar power stations, are centralized and often require electricity to be transmitted over long distances. By contrast, DER systems are decentralized, modular and more flexible technologies, that are located close to the load they serve, albeit having capacities of only 10 megawatts (MW) or less.

DER systems typically use renewable energy sources, including small hydro, biomass, biogas, solar power, wind power, and geothermal power, and increasingly play an important role for the electric power distribution system. A grid-connected device for electricity storage can also be classified as a DER system, and is often called a distributed energy storage system (DESS). By means of an interface, DER systems can be managed and coordinated within a smart grid. Distributed generation and storage enables collection of energy from many sources and may lower environmental impacts and improve security of supply. W

An energy audit is an inspection, survey and analysis of energy flows for energy conservation in a building, process or system to reduce the amount of energy input into the system without negatively affecting the output(s). An energy audit is the first step in identifying opportunities to reduce energy expense and carbon footprints. W

According to the International Energy Agency, improved energy efficiency in buildings, industrial processes and transportation could reduce the world's energy needs in 2050 by one third, and help control global emissions of greenhouse gases.

Microgeneration is the small-scale generation of heat and electric power by individuals, small businesses and communities to meet their own needs, as alternatives or supplements to traditional centralized grid-connected power. Although this may be motivated by practical considerations, such as unreliable grid power or long distance from the electrical grid, the term is mainly used currently for environmentally conscious approaches that aspire to zero or low-carbon footprints or cost reduction. W

Microgrids are modern, localized, small-scale grids, contrary to the traditional, centralized electricity grid (macrogrid). Microgrids can disconnect from the centralized grid and operate autonomously, strengthen grid resilience and help mitigate grid disturbances. They are typically low-voltage AC grids, often use diesel generators, and are installed by the community they serve. Microgrids increasingly employ a mixture of different distributed energy resources, such as solar hybrid power systems, which reduce the amount of emitted carbon significantly. W

A sustainable community energy system is an integrated approach to supplying a local community with its energy requirements from renewable energy or high-efficiency co-generation energy sources. The approach can be seen as a development of the distributed generation concept.

Such systems are based on a combination of district heating, district cooling, plus 'electricity generation islands' that are interlinked via a private wire electricity system (largely bypassing the normal power grid to cut transmission losses and charges, as well as increasing the robustness of the system). The surplus from one generating island can therefore be used to make up the deficit at another. W

LeNSes (Learing Network on Sustainable energy systems), multi-polar Network for curricula and lifelong learning capacity development focused on System Design for Sustainable Energy for All. It is a 3 year project (Oct 2013 - Oct 2016) funded by the European Commission (ACP-EU Edulink II), involving 3 design schools in Europe and 4 in Africa.

In developing countries, more than 1 billion people have no access to reliable electricity and more than 2.5 billion people rely on polluting and inefficient biomass and coal use for cooking and heating.[2] 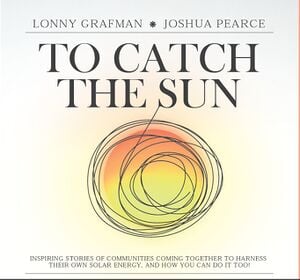 Cover of To Catch the Sun

To Catch the Sun by Lonny Grafman and Joshua Pearce is part of a series on people coming together to use their own resources and creativity to meet their needs with instructions on how you can do it too.

Sign up to get a free copy of the ebook at http://tocatchthesun.com/ or purchase a softback on Amazon.

Brought to you by backers on Kickstarter. 440 backers brought in over $20,000 to help make this book a beautiful addition to your library. 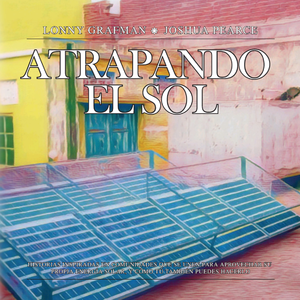 work with the sun®, Mapdwell

"My passion isn't for hydro, it's for people taking control of their own futures." Ann Harding, Settle Hydro [3]