From Appropedia
Redirected from Portugal 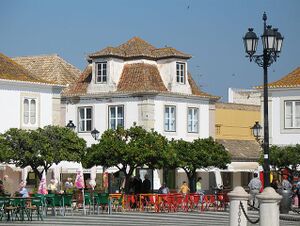 Portugal (Portuguese pronunciation: [puɾtuˈɣal]), officially the Portuguese Republic (Portuguese: República Portuguesa [ʁɛˈpuβlikɐ puɾtuˈɣezɐ]), is a country located on the Iberian Peninsula, in southwestern Europe, and whose territory also includes the Atlantic archipelagos of the Azores and Madeira. It features the westernmost point in continental Europe, and its Iberian portion is bordered to the west and south by the Atlantic Ocean and to the north and east by Spain, the sole country to have a land border with Portugal. Its two archipelagos form two autonomous regions with their own regional governments. Lisbon is the capital and largest city by population.

Greater Côa Valley rewilding area: Located in Portugal in the Côa Valley on the border with Spain. Rewilding Europe is trying to increase the number of semi-wild livestock such as feral horses and cows. Due to depopulation and land abandonment, there is a significant decrease in grazing, which has caused natural succession and more plant cover in the landscapes. The organisation promotes grazing as a tool to lower the risk of fire. The organisation claims more "wild" livestock will lead to more diverse "mosaic landscapes", which may improve conditions for populations of roe deer and other species including some which are extinct from the region such as Iberian ibex. Besides the promotion of conservation grazing, the organisation is also occupied with promoting ecotourism, advocacy in order to convince the Portuguese government to set aside more land in order to create a biological corridor, and a project to increase number of the wolves in the area. W

Part of Lisbon City's wider participatory budget, it sets aside funds for projects with positive climate change mitigation and adaptation impacts, such as cycling lanes, tree planting for street heat reduction, or water capture and storage. The impact of the 'green' participatory budget is designed to be two-fold; ensuring constant annual investments into the city's low-carbon transition, whilst also raising awareness among citizens of the benefits of climate change mitigation and adaptation projects.[1] 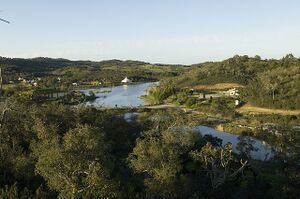 Tamera is a peace research village with the goal of becoming "a self-sufficient, sustainable and duplicable communitarian model for nonviolent cooperation and cohabitation between humans, animals, nature, and Creation for a future of peace for all." It is also often called a "healing biotope". Literally translated, "biotope" simply means a place where life lives. In Tamera, however, "healing biotope" is also described as a "greenhouse of trust, an acupuncture point of peace, and a self-sufficient future community." It is located on 335 acres (1.36 km2) in the Alentejo region of southwestern Portugal.

Portugal ran on renewable energy alone for four days, May 16[7]

Lisbon ShareFest Brings Together the Portuguese Sharing Community, May 8[8]

Pioneering Portugal has radically reduced its dependence on fossil fuels. This year nearly half of its electricity will come from renewable sources, August 20[9]

Page data
Retrieved from "https://www.appropedia.org/w/index.php?title=Portugal_community_action&oldid=695253"
Cookies help us deliver our services. By using our services, you agree to our use of cookies.
Categories:
About Appropedia · Policies · Contact · Content is available under CC-BY-SA-4.0 unless otherwise noted.