From Appropedia
Redirected from Germany 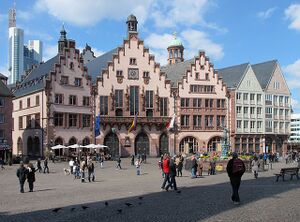 Germany (German: Deutschland, pronounced [ˈdɔʏtʃlant] (listen)), officially the Federal Republic of Germany, is a country in Central Europe. It is the second most populous country in Europe after Russia, and the most populous member state of the European Union. Germany is situated between the Baltic and North seas to the north, and the Alps to the south; it covers an area of 357,022 square kilometres (137,847 sq mi), with a population of over 83 million within its 16 constituent states. Germany borders Denmark to the north, Poland and the Czech Republic to the east, Austria and Switzerland to the south, and France, Luxembourg, Belgium, and the Netherlands to the west. The nation's capital and largest city is Berlin and its financial centre is Frankfurt; the largest urban area is the Ruhr.

There are 17 Biosphere Reserves, and 105 nature parks. More than 400 zoos and animal parks operate in Germany. The Berlin Zoo, which opened in 1844, is the oldest in Germany, and claims the most comprehensive collection of species in the world.

On 11 April 2013, eight European bison (one male, five females and two calves) were released into the wild in the Bad Berleburg region of Germany, after 300 years of absence from the region.

In 2014 the German government built a 3 km road tunnel to remove an Autobahn from the Leutratal und Cospoth nature reserve. W

wikipedia:Chiemgauer, regional local currency started in 2003 in Prien am Chiemsee, Bavaria, Germany. It is named after the Chiemgau, a region around the Chiemsee. The Chiemgauer program is intended to promote local commerce and non-profits.

According to Renewables First, the proportion of energy generated through community-owned production amounts to 15 percent in Germany. When communities take energy generation into their own hands, it connects the user to the source. [2]

In 1997, people of Wildpoldsried, in some cases acting as individuals, began a series of projects that produce renewable energy. The first efforts were wind turbines and biomass digesters for cogeneration of heat and power. In the time since, new work has included a number of energy conservation projects, more wind and biomass use, small hydro plants, photovoltaic panels on private houses, and district heating. Tied to this are ecological flood control and wastewater systems.

Today, the effects of this are an unforeseen level of prosperity resulting in construction of nine new community buildings, including a school, gymnasium, and community hall, complete with solar panels. There are three companies operating four biogas digesters with a fifth under construction. There are seven windmills with two more on the way. One hundred and ninety private households are equipped with solar, which pays them dividends. The district heating network has 42 connections. There are three small hydro power plants. Wildpoldsried now produces 321 percent more energy than it needs and is generating 4.0 million Euro in annual revenue. At the same time, there has been a 65% reduction in the town's carbon footprint. W

Münster in North Rhine-Westphalia claims to be the bicycle capital of Germany. It states that in 2007, vehicle traffic (36.4%) fell below traffic by bicycle (37.6%), even though it is unclear how such a figure is defined. The city maintains an extensive network for bicycles including the popular "Promenade" which encircles Münster's city centre. While motorised vehicles are banned, there are paths for pedestrians. Additional bicycle paths link all city districts with the inner city and special traffic lights provide signals for bicyclists. Bicycle stations in Münster offer bicycle rentals.[3]

In 2009, Kai Gidhorn was regularly picking apples while cruising on his bike through the backcountry of Berlin, Germany. Because he wanted to remember the good spots, he plotted them on a map. And because he also wanted to share that with friends, he made it a collaborative map online. Slowly, the map grew as people added more fruit trees in public spaces to it. One thing lead to another, and Mundraub ("theft of food") was born. Now the Berlin-based initiative has more than 40,000 registered users in Germany and Austria.

The practice in itself — foraging and gleaning — is not new. Still, it was forgotten, particularly in cities. Thanks to Mundraub's collaborative mapping (or so it seems), the practice is now re-emerging in Germany. People have become used to maps to relate to their environment and find their way. This is not limited to the German-speaking world. Falling Fruit, a similar platform in the U.S. has a global reach and has collected probably the largest data repository of fruit trees globally, tapping on the crowd as well as open data. To sum it up, the idea of urban foraging is to crowdsource a map of growing edibles, reconnect ourselves to our edible urban landscape, and, if possible, get free food. But this isn't just about taking.

Mundraub staff work with children and adults to share literacy about edibles and plant growth. They also offer tours to uncover new edibles, organize collective harvests, and make apple juice and cider, giving people a taste of DIY projects. In December of 2016, in Pankow, a borough of Berlin, urban foragers struck a deal with the local government to plant and take care of fruit trees in a public park.

Fruit trees are usually not favored by municipalities because they require intensive care. While the number is humble — twelve trees — this is quite a ground-breaking achievement when one considers the tradition of top-down management of German city administrations. Consider that in most German cities, in order to pick up fruits from public trees you are supposed to ask permission to the municipality. In Berlin-Pankow, not only have urban foragers received a bulk authorization to pick fruits from any public tree, but also the right to take care of the planted trees, which includes pruning.

"We are currently in an experimentation phase: If it's successful, if citizens take good care of the trees, then we are ready to open more land for such direct involvement of citizens," says Andreas Johnke, director of the municipal service in charge of streets and green spaces of the Berlin-Pankow borough. This is just a start, one borough, twelve trees planted, but Mundraub plans to do the same everywhere in Germany, and many cities already have shown interest. The goal is to get 200 cities by the end of 2017 to open up their tree cadasters and grant bulk authorization to citizens to pick up edibles without needing to ask. And in March, Mundraub also collaborated with a supermarket to let citizens plant five fruit trees in the parking lot, blurring the line between private and public space.[4]

The city of Hamburg decided to tear down a deteriorating historical building complex in a neighborhood once known as "das Gängeviertel." In August 2009, artists formed a collective to oppose the destruction of the 12 buildings, and advocated that they instead be repurposed as a public space for creativity. The collective succeeded in saving the Gängeviertel, and held a launch celebration. The event brought 3,000 residents of Hamburg into the space for exhibitions, film screenings, concerts, and other cultural events. The collective then transformed into a co-operative in 2010, and presented a concept plan for the complex to the local urban development authority in Hamburg. The city approved the plan and granted the co-op's use and management of the buildings. In the six years since, several of the buildings have been renovated by the city and tens of thousands of people have visited the cultural complex. In 2012, the German UNESCO Commission celebrated the Gängeviertel initiative as a successful example of urban development that promotes cultural and social participation through the preservation of public spaces and democratic city policies. Adrien Labaeye [5]