From Appropedia
Redirected from Berlin 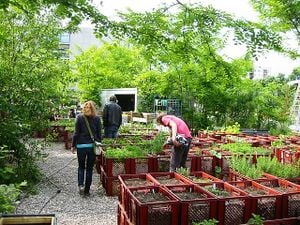 Berlin ( bur-LIN, German: [bɛɐ̯ˈliːn] (listen)) is the capital and largest city of Germany by both area and population. Its 3.7 million inhabitants make it the European Union's most populous city, according to population within city limits. One of Germany's sixteen constituent states, Berlin is surrounded by the State of Brandenburg and contiguous with Potsdam, Brandenburg's capital. Berlin's urban area, which has a population of around 4.5 million, is the second most populous urban area in Germany after the Ruhr. The Berlin-Brandenburg capital region has around 6.2 million inhabitants and is Germany's third-largest metropolitan region after the Rhine-Ruhr and Rhine-Main regions.

Berlin straddles the banks of the Spree, which flows into the Havel (a tributary of the Elbe) in the western borough of Spandau. Among the city's main topographical features are the many lakes in the western and southeastern boroughs formed by the Spree, Havel and Dahme, the largest of which is Lake Müggelsee. Due to its location in the European Plain, Berlin is influenced by a temperate seasonal climate. About one-third of the city's area is composed of forests, parks, gardens, rivers, canals, and lakes. The city lies in the Central German dialect area, the Berlin dialect being a variant of the Lusatian-New Marchian dialects.

Berlin has a tradition of communal neighborhood gardens (Schraebergaerten) stretching back over 150 years. That tradition lives on in projects like the huge Prinzessinengarten (Princess Garden) in the multicultural Kreuzberg district and the Mauergarten (Wall Garden) in the shadow of the Berlin Wall. This list from Foodtank explores many similar projects.[2]

foodsharing.de (in German) coordinates a network of community food fridges across the country and recruits groups of volunteers to "rescue" food which would otherwise be thrown out from willing shops and producers.[3]

The bustling German capital is an amazing city to visit for all sorts of reasons, but it has a lot to offer for those who are interested in cooperatives, squats, and other local sharing projects.

Berlin's vote to take properties from big landlords could be a watershed moment, Alexander Vasudevan, Sep 29[6]

The Urban Common Spaces That Show Us We Belong to Something Larger, May 3[8]

Berliners finally dump the car for love affair with the bicycle, Apr 26[9]

In Berlin, a Model for Creative and Affordable Housing, Apr 12[10]

To engage citizens in planning technology must be matched with a participatory culture, Mar[12]

Sehr gut: Why cycling in Berlin is a dream. Wide streets, bikes in parks, cycling culture... 10 reasons why the German capital is a marvellous place to cycle,[17] April 22

Wikitravel: Berlin, Get around

Page data
Retrieved from "https://www.appropedia.org/w/index.php?title=Berlin_community_action&oldid=656437"
Cookies help us deliver our services. By using our services, you agree to our use of cookies.
Categories:
About Appropedia · Policies · Contact · Content is available under CC-BY-SA-4.0 unless otherwise noted.