From Appropedia
Redirected from South Africa 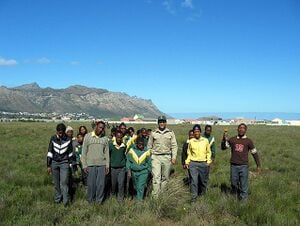 South Africa, officially the Republic of South Africa (RSA), is the southernmost country in Africa. It is bounded to the south by 2,798 kilometres (1,739 mi) of coastline that stretch along the South Atlantic and Indian Oceans; to the north by the neighbouring countries of Namibia, Botswana, and Zimbabwe; and to the east and northeast by Mozambique and Eswatini and it surrounds the enclaved country of Lesotho. It is the southernmost country on the mainland of the Old World, and the most populous country located entirely south of the equator. South Africa is a biodiversity hotspot, with unique biomes, plant and animal life. With over 60 million people, the country is the world's 23rd-most populous nation and covers an area of 1,221,037 square kilometres (471,445 square miles). South Africa has three capital cities, with the executive, judicial and legislative branches of government based in Pretoria, Bloemfontein, and Cape Town respectively. The largest city is Johannesburg.

The country is one of the few in Africa never to have had a coup d'état, and regular elections have been held for almost a century. However, the vast majority of Black South Africans were not enfranchised until 1994. During the 20th century, the black majority sought to claim more rights from the dominant white minority, which played a large role in the country's recent history and politics. The National Party imposed apartheid in 1948, institutionalising previous racial segregation. After a long and sometimes violent struggle by the African National Congress and other anti-apartheid activists both inside and outside the country, the repeal of discriminatory laws began in the mid-1980s. Since 1994, all ethnic and linguistic groups have held political representation in the country's liberal democracy, which comprises a parliamentary republic and nine provinces. South Africa is often referred to as the "rainbow nation" to describe the country's multicultural diversity, especially in the wake of apartheid.

South Africa signed the Rio Convention on Biological Diversity on 4 June 1994 and became a party to the convention on 2 November 1995. It has subsequently produced a National Biodiversity Strategy and Action Plan, which was received by the convention on 7 June 2006. The country is ranked sixth out of the world's seventeen megadiverse countries. Ecotourism in South Africa has become more prevalent in recent years, as a possible method of maintaining and improving biodiversity.

South Africa has lost a large area of natural habitat in the last four decades, primarily due to overpopulation, sprawling development patterns and deforestation during the 19th century. South Africa is one of the worst affected countries in the world when it comes to invasion by alien species with many (e.g. black wattle, Port Jackson willow, Hakea, Lantana and Jacaranda) posing a significant threat to the native biodiversity and the already scarce water resources. W

Protected areas may also be protected for their value and importance as historical, cultural heritage or scientific sites. W

The area around Zeekoevlei lake, in South Africa, has had extremely high concentrations of threatened native plant species. This is partly because its northern bank was used as a garbage dump for many years. Then, in 2005, the city of Cape Town rezoned the area into parcels of land to be purchased by people who suffered through the Apartheid. The residents who moved in joined forces with nature conservation officials and local environmental organizations to restore the wetland. In practice, this meant residents largely left the space open and undeveloped. Some residents have actively removed invasive species, allowing a particularly threatened plant species, the fynbos, to thrive again in its natural habitat. The Bottom Road Sanctuary now has over 50,000 native plants, attracting many kinds of wildlife. It also has walkways, benches, and barbecuing spaces for nearby residents to share. Adrien Labaeye [1]

Through our online presence, research, and multi-stakeholder collaborations we work towards expanding public access to urbanism in order to promote a more visionary and inclusive city. We are an independent think-tank, advocating knowledge and citizen engagement to meet the challenges of our city. Future Cape Town is the founding partner of Our Future Cities, which also houses Future Johannesburg, Future Lagos and Future London."

Bergnek Community Projects is a community development initiative that was started to empower and uplift women and youth through sustainable business ventures. The program provides access to food, clean water, and reproductive health care for women and girls in school. The long-term aim of the group is to build a community health care center. [2]

People’s Assembly, "aims to promote accountability and bridge the gap between ordinary people and their elected representatives."

Centre for Environmental Rights, non-profit company and law clinic based in Cape Town

We’re delighted to discover Cape Town’s CANs movement - “community action networks” that have been keeping a city together, under Covid, Feb 19 [3]

How renewable energy in South Africa is quietly stealing a march on coal, June 1 [8]

South Africa must start managing its retreat from the coast, May 8 [9]

Johannesburg takes up the challenge of a car-free city in October 2015, October 23 [10]

Resentse Sinqobile Trust Trading as Zondi BuyBack Initiative". A local NGO and government institutions have teamed up to establish this comprehensive buyback centre to recycle, reshape and sell household waste such as cans and plastic. Natural resource protection, the reduction of litter, increased employment opportunities and an educational program are among the impressive results of this initiative.

IziWasha Two social enterprises and a private company have developed this innovative hand-held laundry device to facilitate washing in low-income communities. As the appliance does not rely on electricity or a home water supply, IziWasha significantly cuts water and energy use. A network of female micro-franchisees who distribute the eco-friendly product will directly benefit from the revenues.

Reclaiming Livelihoods - Mooi River Waste Reclaiming". This initiative led by a community-based organization, an international NGO and a government department has a high impact on local waste pickers who earn an income from recycling waste. By formalising the workforce and providing shelter, protective clothes and technical equipment, attractive job opportunities are created.

Amatola Wild Trout Fishery" is the first recreational fly-fishery in South Africa owned and managed by a local community. Set up by a partnership between a NGO and a research institution, the fishery brings a high-end market tourism activity into a rural area, while focusing on skills training and job creation for local people and environmental improvement by sustaining water quality and wild trout populations.

"Claire Reid Reel Gardening" provides consumers with a pre-fertilised seed strip that encases seeds at the correct depth and distance apart and offers planting instructions in seven languages. Implemented by a youth organization with assistance from government and social development programmes, the initiative aims to create sustainable subsistence gardens throughout South Africa.