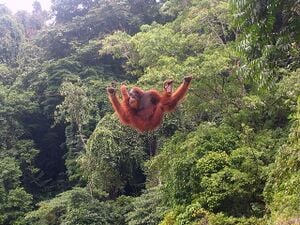 Rewilding, or re-wilding, activities are conservation efforts aimed at restoring and protecting natural processes and wilderness areas. Rewilding is a form of ecological restoration with an emphasis on recreating an area's "natural uncultivated state". This may require active human intervention to achieve. Approaches can include removing human artefacts such as dams or bridges, connecting wilderness areas, and protecting or reintroducing apex predators and keystone species.

While rewilding initiatives can be controversial, the United Nations have listed rewilding as one of several methods needed to achieve massive scale restoration of natural ecosystems, which they say must be accomplished by 2030 as part of the 30x30 campaign.

A wildlife garden (or wild garden) is an environment created by a gardener that serves as a sustainable haven for surrounding wildlife. Wildlife gardens contain a variety of habitats that cater to native and local plants, birds, amphibians, reptiles, insects, mammals and so on. Establishing a garden that emulates the environment before the residence was built and/or renders the garden similar to intact wild areas nearby (rewilding) will allow natural systems to interact and establish an equilibrium, ultimately minimizing the need for gardener maintenance and intervention. Wildlife gardens can also play an essential role in biological pest control, and also promote biodiversity, native plantings, and generally benefit the wider environment.

In the history of gardening the term "wild garden" is more likely to refer to the sort of unstructured garden promoted by the influential Irish gardener and writer William Robinson, whose book The Wild Garden (1870) was very influential; the woodland garden is one legacy. Wildlife was only a peripheral concern of Robinson.

A wildlife corridor, habitat corridor, or green corridor is an area of habitat connecting wildlife populations separated by human activities or structures (such as roads, development, or logging). This allows an exchange of individuals between populations, which may help prevent the negative effects of inbreeding and reduced genetic diversity (via genetic drift) that often occur within isolated populations. Corridors may also help facilitate the re-establishment of populations that have been reduced or eliminated due to random events (such as fires or disease). This may potentially moderate some of the worst effects of habitat fragmentation, wherein urbanization can split up habitat areas, causing animals to lose both their natural habitat and the ability to move between regions to use all of the resources they need to survive. Habitat fragmentation due to human development is an ever-increasing threat to biodiversity, and habitat corridors are a possible mitigation.

Summary data from Our World in Data[edit | edit source]

"We are not defending nature, we are nature defending itself" Resistencia Indigena[3]

"I believe in God, only I spell it Nature." Frank Lloyd Wright

"If you hurt nature you are hurting yourself" ~ J Krishnamurti

At the 9th World Wilderness Congress in Mérida, Mexico, WILD, with the collaboration of a spectrum of international organizations, governments and individuals, introduced Nature Needs Half, which aspires that humans give up use of half of land and water on Earth, in order to support wilderness. Nature Needs Half is an idea put forth by the WILD Foundation. Marine biologist Sylvia Earle and Jane Goodall have endorsed Nature Needs Half, with Earle's only criticism being that she "hoped that half would be enough". Since its inception, WILD has begun collecting and conducting case studies of places around the world that have, or are on track to achieve, at least half protection.

Increasing biodiversity in agriculture may increase the sustainability of the farm and is called agroecological restoration.

The biodiversity of farms is an aspect of agroecology.

Page data
Retrieved from "https://www.appropedia.org/w/index.php?title=Community_action_on_biodiversity&oldid=660181"
Cookies help us deliver our services. By using our services, you agree to our use of cookies.
Categories:
About Appropedia · Policies · Contact · Content is available under CC-BY-SA-4.0 unless otherwise noted.