From Appropedia
Redirected from Open spaces

Open spaces here refers to anything from public places in urban environments to rural wilderness. 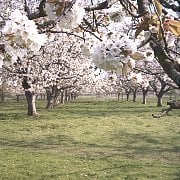 Community orchards offer a way of saving vulnerable old orchards and opportunities to plant new ones, providing places for quiet contemplation or local festivities, a reservoir of local varieties of fruit and a refuge for wild life. (see also Open spaces UK)

Open spaces are key to the health and vitality of cities. Walkable, safe, green spaces increase the possibilities for people to meet and nurture relationships beyond family, friends, and colleagues. But a discussion about Sharing Cities can't focus on open spaces alone. Gentrification should be a part of that discussion. If we, promoters of Sharing Cities, do not manage to address the tension of gentrification by finding strategies to secure the livelihoods of the people who produce the urban commons and to disarm profit-maximizing interests, then the tragedy of the urban commons will only be reinforced. The way the sharing economy discourse was co-opted by profit-oriented platforms shows how quickly Sharing Cities could fall over the barrier and become just another way to reproduce existing patterns of domination.

Social capital is shaped and molded by space. This same social capital is crucial in the successful self-organization of the commons, according to the late political economist Elinor Ostrom. Thus, in places where people can mobilize social capital, decades of urban planning practices are being challenged.

Digitalization is also an opportunity: It allows people to collect and make use of data in creative ways on an unprecedented scale. This has a huge potential for the urban commons. City administrators hold large amounts of land data that is so far hard to access or use, but when it becomes open data, it can unleash bottom-up innovations.

Last but not least, we should not forget that practices that foster Sharing Cities may have actually been there for decades. Some of those practices may be seen as old-fashioned, but might prove useful today. Adrien Labaeye [1]

"To sit in the shade on a fine day and look upon verdure is the most perfect refreshment." Jane Austen

Can parks save Philadelphia? Feb 21 [5] ...Pennsylvania

From New York to Ealing, local parks are being given a new lease of life, november 6 [8]