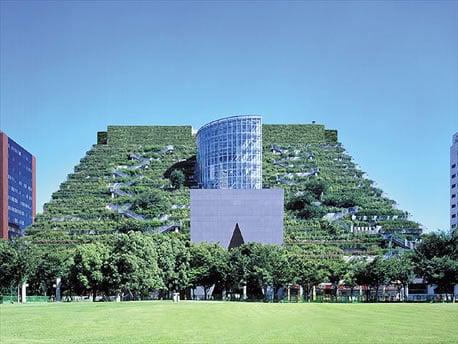 Most humans now live in cities. The quality of urban life therefore considerably defines the quality of human life. 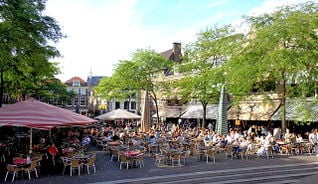 Walkability is a measure of how friendly an area is to walking. Walkability has many health, environmental, and economic benefits. Factors influencing walkability include the presence or absence and quality of footpaths, sidewalks or other pedestrian rights-of-way, traffic and road conditions, land use patterns, building accessibility, and safety, among others. Walkability is an important concept in sustainable urban design. W

Increased walkability has proven to have many individual and community health benefits, such as opportunities for increased social interaction, an increase in the average number of friends and associates where people live, reduced crime (with more people walking and watching over neighborhoods, open space and main streets), increased sense of pride, and increased volunteerism. One of most important benefits of walkability is the decrease of the automobile footprint in the community. Carbon emissions can be reduced if more people choose to walk rather than drive.

Walkability has also been found to have many economic benefits, including accessibility, cost savings both to individuals and to the public, increased efficiency of land use, increased livability, economic benefits from improved public health, and economic development, among others. The benefits of walkability are best guaranteed if the entire system of public corridors is walkable - not limited to certain specialized routes. The World Cancer Research Fund and American Institute for Cancer Research released a report that new developments should be designed to encourage walking, on the grounds that walking contributes to a reduction of cancer. W 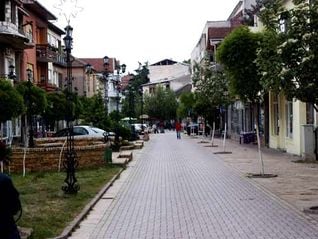 To a large extent New Urbanism is a revival of traditional street patterns and urban design. New Pedestrianism also respects traditional town design, but seeks to further reduce the negative impact of the automobile. By eliminating the front street and replacing it with a tree-lined pedestrian lane, emphasis is placed on low-impact alternative travel such as walking and cycling. Eliminating the automobile street from the front allows for intimate scale plazas, fountains, pocket parks, as well as an unspoiled connection to natural features such as lakes, streams, and forests that may border or be included in a Pedestrian Village. A vast public realm is created that is free from the sight, smell, and sound of automobiles, yet automobiles are still served on a separate network. W

Land recycling is the reuse of abandoned, vacant, or underused properties for redevelopment or repurposing.

Land recycling aims to ensure the reuse of developed land as part of: new developments; cleaning up contaminated properties; reuse and/or making use of used land surrounded by development or nearby infrastructure. End-uses from land recycling may include: mixed-use, residential, commercial, or industrial developments; and/or public open space such as urban open space use by urban parks, community gardens; or larger open space reserves such as regional parks.

Since many abandoned and underutilized properties lie within economically distressed and disadvantaged communities, land recycling often benefits and stimulates re-investment in historically under-served areas. The real or perceived presence of xenobiotic hazardous substances from historical previous uses or in situ land pollution, causing soil contamination and groundwater pollution, may complicate the redevelopment of such properties. Such environmentally distressed properties, with site cleanup and mitigation considerations, are commonly referred to as brownfields. W

The social, economic, environmental, and other benefits of land recycling include:

Land recycling expresses an inherently sustainable idea, based on the same common-sense as recycling an aluminum can. Like other natural resources, land represents a shared investment that should be reused and recycled, rather than consumed and abandoned after use. Recycling paper saves trees, reusing land saves land.

By encouraging the recycling rather than the consumption of land, land recycling promotes smart growth and responsible, sustainable patterns of development. A 2001 study by George Washington University shows that for every acre of brownfield redeveloped, 4.5 acres (18,000 m2) of undeveloped land is conserved. Public Policies and Private Decisions Affecting the Redevelopment of Brownfields: An Analysis of Critical Factors, Relative Weights and Areal Differentials. As most brownfields and other abandoned sites are typically situated in urban areas, they tap into existing nearby infrastructure, limiting the need to build new roads, gridlines, and amenities, thereby reducing further land consumption. Each infill development prevents sprawl into open space, forests and agricultural land, preserving acres of undeveloped land. W

Cittaslow is a movement founded in Italy and inspired by the Slow Food organization. Cittaslow's goals include improving the quality of life in towns by slowing down its overall pace, especially in a city's use of spaces and the flow of life and traffic through them. Cittaslow is part of a cultural trend known as the Slow movement. W

Fab City has been set up to explore innovative ways of creating the city of the future. It focuses on transforming and shaping the way how materials are sourced and used. This transformation should lead to a shift in the urban model from 'PITO to DIDO' that is, 'product-in, trash-out' to, data-in, data-out'. This can eventually transform cities into self-sufficient entities in 2054; in line with the pledge that Barcelona has made.The Fab City links to the fab lab movement, because they make use of the same human capital. The Fab cities make use of the innovative spirit of the users of the fab labs.

"Self-build" is the practice of creating an individual home for yourself through a variety of different methods. The self-builder's input into this process varies from doing undertaking the actual building work to contracting out all the work to an architect or building package company. The term self build in the UK and Ireland is expressly used when an individual obtains a building plot and then builds his/her own home on that plot. W

WikiHouse is an open-source project for designing and building houses. It endeavours to democratise and simplify the construction of sustainable, resource-light dwellings. The project was initiated in the summer of 2011 by Alastair Parvin and Nick Ierodiaconou of 00, a London-based strategy and design practice, in collaboration with Tav of Espians, James Arthur now with 00 and Steve Fisher of Momentum Engineering. It was launched at the Gwangju Design Biennale in Gwangju, South Korea. The project has since grown to become a worldwide community of contributors. W See also: Urban sustainability UK

"In myriad projects around the world, a new economy is emerging whose core value is stewardship, not extraction. Growth, in this new story, means soils, biodiversity and watersheds getting healthier, and communities more resilient. These seedlings are cheering, but when it comes to binding diverse groups together around a common agenda, something more is needed. We need a compelling story, and a shared purpose, that people can relate to, and support, whatever their other differences.

For me, a strong candidate for that connective idea is the bioregion. Beginning with a short reflection on the power of such a story, and what’s already out there, this text describes what the elements of a design agenda for bioregions might be."

"Cities have the capability of providing something for everybody, only because, and only when, they are created by everybody."

"We need places where we sit on the edges of the public realm and look in the mirror, to be reminded of who we really are." Chuck [4]

"A great high wall there, it tried to stop me

But on the other side, it didn’t say nothing

That side was made for you and me."

Woody Guthrie, This Land Is Your Land

“The freedom to make and remake our cities and ourselves is one of the most precious yet most neglected of our human rights.” David Harvey, The Right to the City [5]

Eco-Cities, multi-national research network co-ordinated by scholars at the University of Westminster (London), the Johns Hopkins University (Baltimore), and the Lemelson Center for the Study of Invention and Innovation at the Smithsonian Institution (Washington DC).

Models and theories of planning and urbanism[edit | edit source] 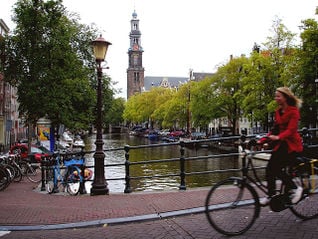 Advocacy planning is a radical departure from past theoretical models. This model takes the perspective that there are large inequalities in the political system and in the bargaining process between groups that result in large numbers of people unorganized and unrepresented in the process. It concerns itself with ensuring that all people are equally represented in the planning process by advocating for the interests of the underprivileged and seeking social change. Public participation is a central tenet of this model. A plurality of public interests is assumed, and the role of planner is essentially the one as a facilitator who either advocates directly for underrepresented groups directly or encourages them to become part of the process. W

The "built environment encompasses places and spaces created or modified by people including buildings, parks, and transportation systems." It can also include their supporting infrastructure, such as water supply or energy networks. In recent years, public health research has expanded the definition of "built environment" to include healthy food access, community gardens, "walkability" and "bikability." W

Participatory planning is an urban planning paradigm that emphasizes involving the entire community in the strategic and management processes of urban planning; or, community-level planning processes, urban or rural. It is often considered as part of community development. Participatory planning aims to harmonize views among all of its participants as well as prevent conflict between opposing parties. In addition, marginalized groups have an opportunity to participate in the planning process. W 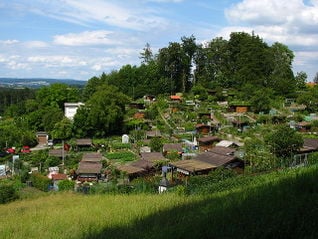 Sustainable urbanism aims to close the loop by eliminating environmental impact of urban development by providing all resources locally. It looks at the full life cycle of the products to make sure that everything is made sustainably, and sustainable urbanism also brings things like electricity and food production into the city. This means that literally everything that the town or city needs is right there making it truly self-sufficient and sustainable. W

Transactive planning was a radical break from previous models. Instead of considering public participation as method that would be used in addition to the normal training planning process, participation was a central goal. For the first time, the public was encouraged to take on an active role in the policy setting process, while the planner took on the role of a distributor of information and a feedback source. Transactive planning focuses on interpersonal dialogue that develops ideas, which will be turned into action. One of the central goals is mutual learning where the planner gets more information on the community and citizens become more educated about planning issues. W

May 1 - 3 - Jane's Walk
A series of neighbourhood walking tours. Named after urban activist and writer Jane Jacobs, Jane's Walks are held annually during the first weekend in May to coincide with her birthday. Jane's Walks are led by volunteers, and are offered for free. The walks are led by anyone who has an interest in the neighbourhoods where they live, work or hang out. They are not always about architecture and heritage, and offer a more personal take on the local culture, the social history and the planning issues faced by the residents. W / janeswalk.net