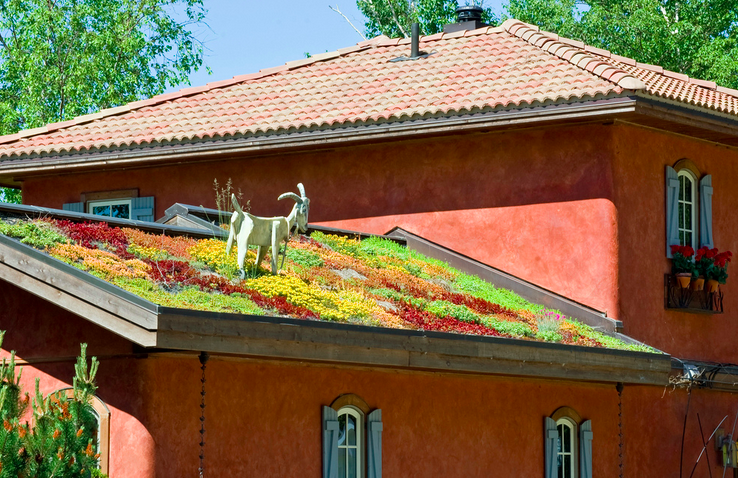 A living roof, or green roof, is a roof of a building that is partially or completely covered with vegetation and a growing medium (soil or another medium), planted over a waterproofing membrane.

A green roof can provide a cooling effect on the immediate surroundings, benefiting both the building and the area. Also, there is an insulating effect by the layer of soil, if used. Green roofs, if implemented widely in a city, could help reduce the heat island effect.[verification needed]

However, they typically require a stronger structure, particularly if soil is used. Thus any environmental advantages may be offset by the greater embedded energy of the structure. The insulating effect can be achieved more cheaply by other means.[verification needed] See Insulation. However, other forms of roof insulation will not have the same cooling effect on the immediate surroundings.

The basic components of green roof systems are waterproofing, soil and plants. It really is that simple. The combination of these material is easy and the success of all living roofs depends on the types of plants used and an understanding of how these combined materials will work.[1] An understanding of the type of environment the roof will be located in is also important for the success of any living roof. For example here in Humboldt County earthquakes pose a risk as well as a high precipitation level in the fall and winter months, however in the spring and summer months there is little to no rain fall. Design should account for earthquakes and the forces it will create on the building as well as any irrigation or drainage components that will function during both during the wet season and dry season. These however are design features that should be asked when building the structural support and housing unit the living roof will be placed on top of before and during construction of both the roof and the house or structures for the roof. For the purpose of our project we were only asked to concern ourselves with the construction of the roof itself because the farm would be responsible for the hutch or housing unit and the structural support. This means we focused on the weather aspect of design for the roof. Living roofs are that simple especially for small designs. Living roofs are becoming increasingly popular in North America and are starting to show themselves in large scale industrial buildings. The design and construction of those types of roofs are a little more complex and a lot more labor intensive, but the end result is worth the effort

A main concern regarding living roofs revolves around the types of vegetation that is being used because the performance of the living roof is the plant communities. Concerns regarding the plant communities on living roofs deal with weather factors such as wind stress and over exposure to the sun, however in the literature the main focus has been on wind stress because plants are not generally accustomed to the heights that roofs generally are. There has been some practice of using native plant species because they are generally most accustomed to the region the roof is. However, in some of the literature discusses native plants not working on extensive living roofs because of the shallow soil depth generally found on extensive living roofs.This then means that not only is wind stress the main factor in determining the types of flora being used but that the rooftop itself is challenging for the survival of plants.[2]

Another more recent concern that has appeared during the increased popularity of living roofs is water-quality of the storm water runoff from living roofs. The literature suggestes that living roofs may act as another source surface-water pollution primarily because of the nutrient content found in the growing medium and soil used.[2] To combat this we tried to use soil and growing mediums that not only would maintain the health of the plants but that were already found on the farm. We went with a perlite and coco peat combination.

In the world that is living roofs there are generally two types of designs. They are intensive and extensive. More recently there has been the inclusion of a hybrid living roof that is a combination of these two types called semi-extensive.

There is more information on semi-extensive living roofs out there, but the main idea behind the design is that it is low maintenance like an extensive roof, but has deeper layers for growing medium like an intensive roof has. Meaning high diversity of plants with low-input.[3]

The design of a living roof depends on the wants and needs of those requesting one for their home or industrial units. A living roof should be viewed as another artistic expression of self because they can be built, placed, and designed in a manner that expresses either the designer or the one inhabiting the structure. However, the one aspect of living roofs that generally has laid out plans or rules that should be followed are the different layering components of living roofs.[1]

Green roofs have the disadvantage that they require more building materials to support the weight, which works against their sustainability.

What is the net impact of green walls on sustainability?[expansion needed]

Much of the benefit of a planted roof can be obtained by a simple horizontal pergolaW suspended over the actual roof and used as a support for vinesW planted in the ground or in pots.

Pergolas can made of light wood slats, netting, cords, PVC pipe, etc. Care should be taken to provide adequate structural support, as luxuriantly growing vines can be quite heavy, and to insure that the roof remains accessible for maintenance. High winds or snow may also impose stresses.

Depending on species and situation, vines may take several years to achive full coverage. It may sometimes be advisable to plant two species for a few years - a fast-growing annual species to provide temporary shade while a slower-growing permanent species is getting established.

Pergolas can also be used as supports for other shading materials such as cloth, light wooden slats, cut vegetation, etc. Care should be taken in the selection and fastening of materials to prevent damage or injury in the event of high winds or other stressful conditions.