From Appropedia
Redirected from Los Angeles 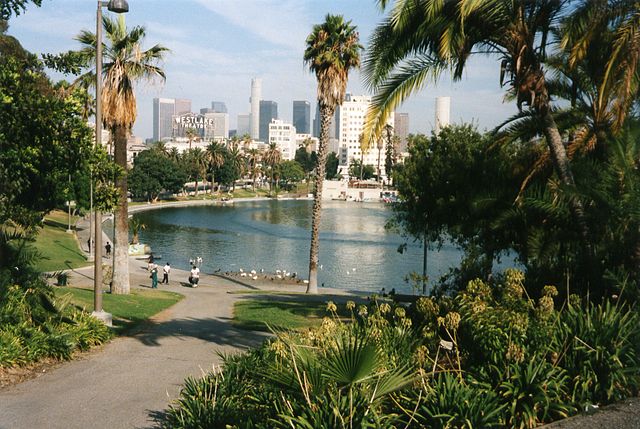 Los Angeles (US: (listen) lawss AN-jəl-əs; Spanish: Los Ángeles [los ˈaŋxeles], lit. 'The Angels'), often referred to by its initials L.A., is the largest city in the state of California and the second most populous city in the United States after New York City. Los Angeles is the commercial, financial, and cultural center of Southern California. With a population of roughly 3.9 million as of 2020, Los Angeles is known for its Mediterranean climate, ethnic and cultural diversity, Hollywood film industry, and sprawling metropolitan area. The city of Los Angeles lies in a basin in Southern California adjacent to the Pacific Ocean extending through the Santa Monica Mountains and into the San Fernando Valley. It covers about 469 square miles (1,210 km2), and is the seat of Los Angeles County, which is the most populous county in the United States with an estimated 9.86 million as of 2022.

Home to the Chumash and Tongva indigenous peoples, the area that became Los Angeles was claimed by Juan Rodríguez Cabrillo for Spain in 1542. The city was founded on September 4, 1781, under Spanish governor Felipe de Neve, on the village of Yaanga. It became a part of Mexico in 1821 following the Mexican War of Independence. In 1848, at the end of the Mexican–American War, Los Angeles and the rest of California were purchased as part of the Treaty of Guadalupe Hidalgo, and thus became part of the United States. Los Angeles was incorporated as a municipality on April 4, 1850, five months before California achieved statehood. The discovery of oil in the 1890s brought rapid growth to the city. The city was further expanded with the completion of the Los Angeles Aqueduct in 1913, which delivers water from Eastern California.

Los Angeles, Environmental issues: Owing to geography, heavy reliance on automobiles, and the Los Angeles/Long Beach port complex, Los Angeles suffers from air pollution in the form of smog. The Los Angeles Basin and the San Fernando Valley are susceptible to atmospheric inversion, which holds in the exhausts from road vehicles, airplanes, locomotives, shipping, manufacturing, and other sources.

The smog season lasts from May to October. Unlike other large cities that rely on rain to clear smog, Los Angeles gets only 15 inches (380 mm) of rain each year: pollution accumulates over many consecutive days. Issues of air quality in Los Angeles and other major cities led to the passage of early national environmental legislation, including the Clean Air Act. More recently, the state of California has led the nation in working to limit pollution by mandating low-emission vehicles. Smog is expected to continue to drop in the coming years due to aggressive steps to reduce it, which include electric and hybrid cars, improvements in mass transit, and other measures.

The number of Stage 1 smog alerts in Los Angeles has declined from over 100 per year in the 1970s to almost zero in the new millennium. Despite improvement, the 2006 and 2007 annual reports of the American Lung Association ranked the city as the most polluted in the country with short-term particle pollution and year-round particle pollution. In 2008, the city was ranked the second most polluted and again had the highest year-round particulate pollution. The city met its goal of providing 20 percent of the city's power from renewable sources in 2010.

The American Lung Association's 2013 survey ranks the metro area as having the nation's worst smog, and fourth in both short term and year round pollution amounts.

Cycling in Los Angeles accounts for less than one percent (0.6%) of all work commutes. Because of the mild climate, there is little need to carry the variety of clothing that cyclists require in other less temperate climates.

As of 29 April 2008 there were more than 350 miles (560 km) of bike lanes and paths in the Los Angeles bike path network, such as the Los Angeles River bicycle path, which runs from Burbank to Long Beach, with only a brief hiatus through downtown.

CicLAvia is an event held in Los Angeles where streets are closed to motor vehicles and open for the public to walk, bike, and skate through the open streets. Each CicLavia event is planned by the nonprofit organization CicLAvia in partnership with the City of Los Angeles. The event takes place on a given Sunday and is open for a predetermined set of hours. This started out as a once a year occurrence but later expanded to 3 times a year. In fact, plans to have CicLAvia once a month are in the works. While primarily intended for cyclists, many people can be seen skateboarding, running, or walking down the path. Each street that is closed off is guarded by traffic officers who direct the cars to alternative routes through Los Angeles. On some streets the traffic lights are still in service which means the bikers and pedestrians must abide by the traffic laws. Police are guarding each intersection to allow ultimate safety of the community during this event. CicLAvia brings together densely populated and diverse neighborhoods through a bike route. The event now attracts over 100,000 participants and expands to connect even more neighborhoods.

To expand on their community activism, CicLAvia supports a "carpool" program called Feeder Walks or Rides for people of farther communities to meet up and go together to the event. There are several different cities around LA that use this program for community members to meet up at a specific location and at a specific time to ride their bikes together or walk together to the event so the biker or pedestrian does not have to go alone. This brings a sense of unity to the surrounding communities which is the purpose of the CicLAvia event.

There are a number of commercial areas that have been redeveloped in the past two decades specifically to accommodate pedestrian traffic. Old Town Pasadena was redeveloped in the late 1980s by moving parking off Colorado Boulevard so as to make the street pedestrian-focused. Likewise, the Third Street Promenade in Santa Monica was closed off to vehicular traffic altogether in 1965 and revitalized with improved pedestrian amenities in 1988. Downtown Los Angeles has numerous public escalators and skyways, such as the Bunker Hill steps to facilitate pedestrian traffic in the traffic-laden and hilly terrain.

Downtown Los Angeles is one of two neighborhoods in Los Angeles ranked as a "walker's paradise" (with walk scores 90 or above) by WalkScore.com. The other is Mid-City West, which encompasses the area of the city immediately south of West Hollywood and east of Beverly Hills.

Nevertheless, much of Los Angeles remains pedestrian unfriendly. A large percentage of sidewalks in the City of Los Angeles (43% or 4,600 miles (7,400 km) of the 10,600 total miles) are in ill repair stemming from the City Council passing an ordinance in 1973 that relieved property owners of responsibility for repair of sidewalks damaged by roots, while failing to concurrently allocate funds for city repairs of such sidewalks. The city began dedicating funds for sidewalk repairs in 2000, but the backlog created by the twenty-six year repair hiatus is severe.

Los Angeles: A History of the Future, how a metropolitan area could be rebuilt, over decades, toward balance with nature.

On Tuesday LA City voted for a sales tax hike to build housing for the homeless, Nov 10[3]

The Expo Line, and five other reasons Los Angeles may finally shed its car-centric reputation, Jun 10[5]

Watch a decade of growth in LA's bike infrastructure, April 10[12]

How they did it: Angelenos win their first protected bike lane, April 15[16]

Page data
Retrieved from "https://www.appropedia.org/w/index.php?title=Los_Angeles_community_action&oldid=657097"
Cookies help us deliver our services. By using our services, you agree to our use of cookies.
Categories:
Maintenance categories:
About Appropedia · Policies · Contact · Content is available under CC-BY-SA-4.0 unless otherwise noted.