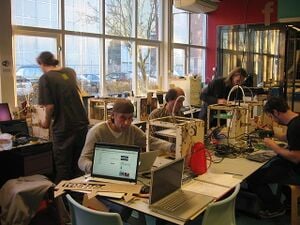 Community resources matter for community empowerment. Although Community and voluntary action has a proud tradition of innovation and doing a lot with a little, it's much harder to do something with virtually nothing. It may be that a community's greatest resource is its people, but community action can perhaps best flourish if backed up with at least some 'real' resources. In partnerships it's been observed that community and voluntary groups can, unfortunately, sometimes get ignored because they are perceived as not bringing any (what other partners percieve as 'real') resources to the table.

A fab lab is typically equipped with an array of flexible computer-controlled tools that cover several different length scales and various materials, with the aim to make "almost anything". This includes technology-enabled products generally perceived as limited to mass production.

While fab labs have yet to compete with mass production and its associated economies of scale in fabricating widely distributed products, they have already shown the potential to empower individuals to create smart devices for themselves. These devices can be tailored to local or personal needs in ways that are not practical or economical using mass production.

The fab lab movement is closely aligned with the DIY movement, open-source hardware, maker culture, and the free and open-source movement, and shares philosophy as well as technology with them.

The Green Fab Lab Network, which started in Catalonia's Green Fablab, is made up of fablabs that embrace the concepts of an open source symbiotic economy and the circular economy through green entrepreneurship. For example, they promote distributed recycling, where locals recycled their plastic waste turning locally sourced shredded plastic into items of value with fused particle fabrication/ fused granular fabrication (FPF/FGF) 3D printing, which not only is a good economic but also a good environmental option. 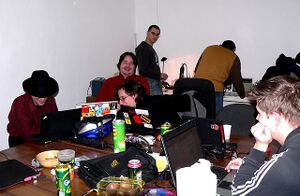 A hackerspace (also referred to as a hacklab, makerspace or hackspace) is a community-operated workspace where people with common interests, often in computers, machining, technology, science, digital art or electronic art, can meet, socialize and collaborate. Hackerspaces have also been compared to other community-operated spaces with similar aims and mechanisms such as Fab Lab, Men's Sheds, and with commercial "for profit" companies such as TechShop. W

A library maker space is an area and service traditionally found in public libraries that offers patrons an opportunity to create content through various resources such as computers, 3-D printers, audio and visual devices, and traditional arts and crafts materials, including ecologic material. In the field of library science, maker spaces are classified as a type of library service offered by librarians to patrons.

A library maker space is intended to allow community members to experience technology or activities that they previously were not able to access. As many maker spaces include technology like 3D printers, sewing machines, soldering guns, coding, robotics, and wood carving machines, patrons are invited to experiment freely. The ultimate purpose of a maker space is to inspire an interest in science, technology and design in the children, young adults, working citizens and elderly who frequent the library. Over time, it is expected that the available activities within each individual maker space will grow to reflect the interests of each community in which the library is housed. Maker spaces are also intended to allow minorities or underrepresented populations, like women, or people with disabilities, to become involved with technology and fields they may not have previously considered.

There are many types of maker spaces offered as a library service. They are usually developed around a certain type of medium, technology, or even patron age group. Some examples include computer programming and coding, 3D modeling and printing, games, and traditional arts and crafts. Although experts in the area may be available, the community atmosphere of the space allows patrons to learn from each other and experiment rather than receive lessons.

Maker spaces have also grown to allow patrons to take classes to develop a certain skill, like cooking, sewing or yoga. W 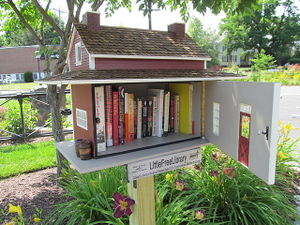 Little Free Libraries are a community movement in the United States and worldwide that offers free books housed in small containers to members of the local community. They are also referred to as community book exchanges, book trading posts, pop-up libraries, and Noox (Neighbourhood bOOk eXchange), amongst other terms. W

The rise of the maker culture is closely associated with the rise of hackerspaces, Fab Labs and other "maker spaces", of which there are now many around the world, including over 100 each in Germany and the United States. Hackerspaces allow like-minded individuals to share ideas, tools, and skillsets. Some notable hackerspaces which have been linked with the maker culture include Noisebridge, NYC Resistor, A2 Mech Shop, Pumping Station: One, Artisan's Asylum, and TechShop. In addition, those who identify with the subculture can be found at more traditional universities with a technical orientation, such as MIT and Carnegie Mellon (specifically around "shop" areas like the MIT Hobby Shop and CMU Robotics Club). As maker culture becomes more popular, hackerspaces and Fab Labs are becoming more common in universities and public libraries. In Europe the popularity of the labs is more prominent than in the US: about three times more labs exist there.

Outside Europe and the US, the maker culture is also on the rise, with several hacker or makerspaces being landmarks in their respective cities' entrepreneurial and educational landscape.W

Men’s Sheds or Community Sheds are non-profit organizations that originated in Australia, to advise and improve the overall health of all males. However they have expanded their remit to anyone regardless of age or gender. In many ways they parallel the growing Hackerspace movement which has similar aims and mechanisms, albeit Hack/Maker spaces are more explicit about their inclusion of all ages and genders. They normally operate on a local level in the community, promoting social interaction and aim to increase the quality of life. There are over 900 located across Australia, with thousands of active members. Men’s Sheds can also be found in Scotland, England, Wales, Ireland, Finland and Greece. W

Public Living Rooms are open to everyone and set up by local people who are part of the Camerados movement. Camerados believe that we can get through tough times better, by looking out for each other in a more human way.

Public Living Rooms are spaces for folk to be alongside each other during the good times and the tough. They are places to meet new people, have a chat and a cuppa with no agendas and no fixing. Because sometimes it’s easier to chat to a stranger in the moment, than someone you know.

The first Public Living Room was set up in Sheffield in 2016. Since then folk have been setting them up in their communities across the UK and the world. From hospitals to universities, from prisons to libraries and community centres to cafes. Over this time, thousands of people have benefitted from connecting and looking out for each other. [1]

Tool libraries allow patrons to borrow tools, equipment and "how-to" instructional materials, functioning either as a rental shop, with a charge for borrowing the tools, or more commonly free of charge as a form of community sharing. Given their increasing popularity and proven history of success, tool libraries and tool banks are now playing an exciting role in the burgeoning sharing economy and can be found everywhere from local public libraries to makerspaces. W

Teem, a visual way to get people involved

“We’re like a road show. We don’t have a space, so we use the community."
Lucy Gomez-Feliciano, Early Learning and Health Director of Logan Square Neighborhood Association. [2] / Chicago

“I would like more than anything to have our own space in the community, because we always have to be looking for places to run our programs. I want to run them every day.”
Gloria Concepcion [3] / Chicago

"Aleida Arzeta dreams of a community center that would also function as a café and bakery, and a place where families could share social and emotional support.

Aleida, Gloria and I fantasize about the community center of their dreams. They envision a comprehensive center with education, business, social and health supports all in one – not a place where “experts” would provide “services” to people in need, but a place where real people would support each other, because we are all experts in something, and we all have needs." Kate Duva [4] / Chicago

The commons is the cultural and natural resources accessible to all members of a society, including natural materials such as air, water, and a habitable earth. These resources are held in common, not owned privately.

Caring for the commons means more than just regulating. Caretakers are needed, that is, a system nurturing societal cooperation, sharing of goods and thoughtfulness of generations to come. It entails establishing norms that reduce free riding and hold communities together. For our generation seems to be moving beyond viewing commons only as a norm, and taking action to enable and protect them in all spheres of our lives. W

Community owned assets or organizations are those that are owned and controlled through some representative mechanism that allows a community to influence their operation or use and to enjoy the benefits arising.

Benefits of community ownership in infrastructure projects such as dams and irrigation are claimed to include increased responsiveness to needs of that community and the community valuing the projects more highly. W

Page data
Retrieved from "https://www.appropedia.org/w/index.php?title=Community_resources&oldid=641223"
Cookies help us deliver our services. By using our services, you agree to our use of cookies.
Categories:
About Appropedia · Policies · Contact · Content is available under CC-BY-SA-4.0 unless otherwise noted.