From Appropedia
Redirected from Chicago 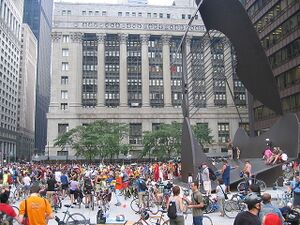 Chicago is a city with a rich fabric of civic institutions and assets. Sure, the city is famous for its towering libraries and museums and the glittering lakefront parks — gatherings of protest and celebration. But Chicago is home to a sprawling network of organizations, commons associations, and community initiatives. Strung together, these groups connect the culture of the city across its vibrant neighborhoods.

Across the U.S., communities have been stratified by income, and Chicago — a deeply segregated city — is a representative example of that stratification. Chicago can boast a single digit unemployment rate even while some neighborhoods — Riverdale, Englewood, West Englewood — are plagued by joblessness at rates higher than 30 percent. Chicago's community organizations are at once its safety net and its hub for connections, and there are a dizzying number of groups.[1]

The Invisible Institute is a reporting outfit practicing accountability journalism by documenting human rights abuses and traditional investigative reporting. The group famously went after the video and autopsy report in the shooting death of Laquan McDonald by Officer Jason Van Dyke, and it specializes in what it calls the "curating" of public information. There's also City Bureau, a civic journalism startup. The group is redefining what community journalism means in Chicago by partnering practicing journalists with would-be reporters from diverse backgrounds on community centered reporting projects. They also host a weekly journalism workshop called the "Public Newsroom." The event is hosted on-site at Build Coffee, a community-centric café that serves coffee from a local roaster, as well as other local food products.[2]

The Blackstone Bicycle Works is a community bike shop built around youth programing and education. It's a retail bike shop and service station with hands-on training for new mechanics — free and open to anyone, ages 8-18.[3]

On the far North Side of the city in the Rogers Park neighborhood, is the Recyclery, an educational community bike shop. The shop hosts open hours three days a week, where residents can work on their bikes with the help of volunteer mechanics. They also host a collaborative workshop hours with Women Bike Chicago called W.T.F. Night, which is for people who identify as women, trans, or femme. The group also sells affordable bikes that have been built or repaired in the shop, and hosts classes on tune-ups and completely overhauling a bike. And the Recyclery donates bikes and equipment — typically repaired by its volunteers — to local community groups.[4]

NeighborSpace, a Chicago-based nonprofit, is one of America's largest urban land trusts. The group, which was established more than two decades ago, supports community gardens in a myriad of ways. It buys or leases land, pays for insurance and water, offers training, lends tools and other resources, and helps community groups define their vision for the garden space. Ben Helphand, executive director, says the group supports a commons or third place. "It is a rare space in the urban context where residents can make collective decisions about their environment in a direct way," he says.

The group works with 109 gardens in 33 different wards across the city, and organizers are constantly fielding requests from community organizations. Urban farming has garnered attention in Chicago in recent years as locally sourced food becomes more popular. Last year, the city won a million-dollar federal grant from the USDA, but urban gardening is not new to the city — the Rainbow Beach Victory Garden, for example, was established during the Depression era. Robin Cline, assistant director, says a key contribution of the land trust is an orientation to help new community groups navigate what will be a collectively managed project. "It's a community training and it can benefit all civic areas," Cline says. "How to work with people that have had very different experiences, we don't learn that as part of a school curriculum."[5] 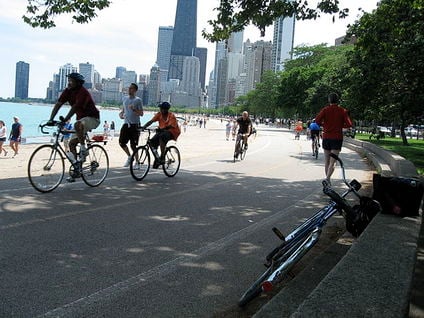 Plant Chicago is a nonprofit organization trying to change the way Chicagoans think about their food and the local environment by developing a circular economy. Kassandra Hinrichsen, education and outreach manager, says its mission is to "promote circular economies of food production and materials reuse, encouraging Chicagoans to think about their food and the waste materials created by our current system." Its facility — the Plant — is located in the Back of the Yards neighborhood of Chicago, and is operated by Bubbly Dynamics. More than a century ago, the neighborhood was the infamous site of Chicago's polluting meatpacking industry that was detailed in Upton Sinclair's book "The Jungle."

Organizers are responding to that history by creating what they call a new type of food production cycle — waste from food businesses located on site is repurposed and reused. There are 20 different food businesses inside of the building, several different farming areas, a farmers' market, and other projects. The idea is to make Chicago a healthier place with less waste by experimenting with how food is produced and materials are used and preserved. In a whitepaper detailing how to transition Chicago to a circular economy, researchers at Loyola University detail the Plant as a great example of functioning closed loop economy. "In the circular economy, all waste materials become an opportunity," Hinrichsen says. "Something that can actually generate money. With the help of Plant Chicago and Bubbly Dynamics, the idea is to reuse all the waste from each food business."[6]

Ocotber 10 - Invitation to create a Chicago Chamber of Commons, ica-usa.org

The Comfort Station is an arts and event space that hosts exhibitions, movies, workshops, organizing events, talks, and concerts. It's in the Chicago neighborhood of Logan Square but is oriented around the city and its communities. It's housed in a Tudor-style comfort station constructed by the city's parks commission during the 1920s as a warming house and public restroom. Similarly, organizers want the art space to be open to the diverse communities of the city and to foster interaction between them. The group's director Jordan Martins says that it's a community centric project: "We try and activate this as a public space — free events, an active programing calendar, using the public asset actively, and reflecting a plurality of artistic communities and the communities of Chicago." In June, the station partnered with the Art Leaders of Color Network on the P.O.W.E.R. Project, and they turned the space into a hub for justice and tolerance programming (the organizing of that project was archived by Matt Mehlan in the Documented Dialogues project). "It's a public space — it's an actually city-owned property — prominently in the middle of the neighborhood that is changing a lot," Martins says. "It's an ongoing experiment. It's aspirational — it's an ongoing site for experimentation. It's a very porous structure in terms of what happens there, who organizes it, and who decides it."[7]

The Experimental Station is a cultural center located on Chicago's South Side in the Woodlawn neighborhood. It's the host of an array of community-centered businesses, cultural events, and initiatives. The programs include the Blackstone Bicycle Works, a community bike shop built around youth programing and education. It's a retail bike shop and service station with hands-on training for new mechanics — free and open to anyone, ages 8-18. The space is also home to a farmers' market and an initiative to increase accessibility to fresh and nutritious foods for low-income people in Illinois. The project hosts an interesting trio of community-driven tenants, too.

There's the Invisible Institute, a reporting outfit practicing accountability journalism by documenting human rights abuses and traditional investigative reporting. The group famously went after the video and autopsy report in the shooting death of Laquan McDonald by Officer Jason Van Dyke, and it specializes in what it calls the "curating" of public information. There's also City Bureau, a civic journalism startup. The group is redefining what community journalism means in Chicago by partnering practicing journalists with would-be reporters from diverse backgrounds on community centered reporting projects. They also host a weekly journalism workshop called the "Public Newsroom." The event is hosted on-site at Build Coffee, a community-centric café that serves coffee from a local roaster, as well as other local food products. The café space is also used for meetings, art shows, workshops, and sells small press books, comics, zines, and other material.[8]

5 Reasons Why Chicago is a Burgeoning Sharing City, Oct 26[13]

And then? Sustainability Through Arts + Culture, Feb 24[15]

Two computer scientists are programming an end to food waste in Chicago, May 13[18]

Chicago: Libraries as platforms for creativity, day one, September 24[20]

On a new shared street in Chicago, drivers, cyclists, and pedestrians will all be equals, October 27[22]

Page data
Retrieved from "https://www.appropedia.org/w/index.php?title=Chicago_community_action&oldid=656433"
Cookies help us deliver our services. By using our services, you agree to our use of cookies.
Categories:
About Appropedia · Policies · Contact · Content is available under CC-BY-SA-4.0 unless otherwise noted.