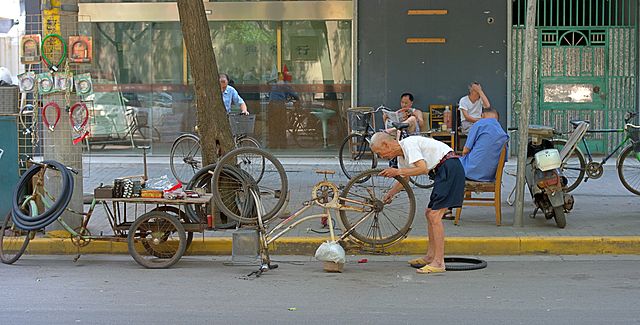 Sustainable livelihood is about meaningful work opportunities for all, especially young people, but also all aspects of what might be called quality of life at work, including for example work satisfaction, work/life balance and fair reward.

A sustainable community provides livelihood opportunities for local people that need them [1], especially young people. Opportunity can be encouraged through a variety of approaches, not just by more traditional or conventional means. Social inclusion involves economic inclusion. To get to a future of work as if people and planet mattered, it seems unlikely that there be a 'silver bullet' type solution, rather it may be that a myriad of interlinking solutions will help. 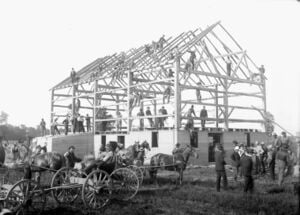 A barn raising, also historically called a "raising bee" or "rearing" in the U.K., describes a collective action of a community, in which a barn for one of the members is built or rebuilt collectively by members of the community. Barn raising was particularly common in 18th- and 19th-century rural North America. A barn was a necessary structure for any farmer, for example for storage of cereals and hay and keeping of animals. Yet a barn was also a large and costly structure, the assembly of which required more labor than a typical family could provide. Barn raising addressed the need by enlisting members of the community, unpaid, to assist in the building of their neighbors' barns. Because each member was entitled to recruit others for help, the favor would eventually return to each participant. W

Communal work is when a gathering takes place to accomplish a task or to hold a competition. A number of cultures have such gatherings, often for the purpose of holding a competition, as in a spelling bee, or for providing manual labour, as in a barn raising. 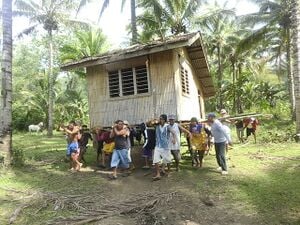 Especially in the past, the tasks were often major jobs, such as clearing a field of timber or raising a barn, that would be difficult to carry out alone. It was often both a social and utilitarian event. Jobs like corn husking or sewing, could be done as a group to allow socializing during an otherwise tedious chore. Such gatherings often included refreshments and entertainment provided by the group. W

"Unpaid work (parenting, growing food for family and community needs, maintaining households, volunteering in community service, do-it-yourself home and community construction, and repair projects) is estimated as some 50 % of all production in OECD countries and 60 to 65 percent in developing countries." Hazel Henderson

The United Nations estimated in 1994 that the livelihood of nearly 3 billion people, or half of the world's population, was made secure by co-operative enterprise. [2]

The Global300 Report states that the world's largest co-operative enterprises, have collective revenues of USD 1.6 trillion, which are comparable to the GDP of the world’s ninth largest economy - Spain. [3]

The Emilia Romagna region of northern Italy has more than 15,000 cooperatives, which contribute over one-third of the region’s GDP. [4]

20.9 million men, women and children around the world are in slavery. ILO

Child Slavery affects an estimated 5.5 million children around the world. [5]

“What we enviros need to understand is the centrality of work in people’s lives—and that in a society with deep social insecurity, your job is everything,” says Uehlein. “One’s livelihood, retirement, hopes, and dreams. We have everything to fear from an environmental movement that is silent about workers. Sustainability starts at the kitchen table, meaning our kid’s education, savings, food, and next job.” Joe Uehlein [7]

"In an ideal society, everyone should work for the wellbeing of others." Mencius 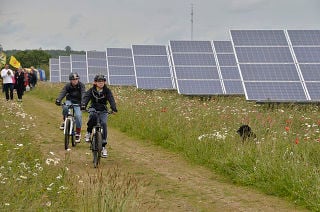 Decent work is the availability of employment in conditions of freedom, equity, human security and dignity.

According to the International Labour Organization ILO, Decent Work involves opportunities for work that is productive and delivers a fair income, security in the workplace and social protection for families, better prospects for personal development and social integration, freedom for people to express their concerns, organize and participate in the decisions that affect their lives and equality of opportunity and treatment for all women and men. W

Labour Behind the Label is a campaign that supports garment workers' efforts worldwide to improve their working conditions, through awareness raising, information provision and encouraging international solidarity between workers and consumers. W

Anti-Slavery, What is modern slavery?