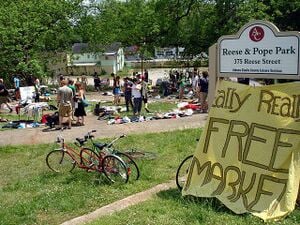 In towns and Cities free stuff can widen access to Arts and culture, Health and sports events and so aid Social inclusion, lifting general levels of wellbeing. In local communities free stuff can help develop the idea of stewardship of community resources. Giving away unwanted items to enable reuse can sometimes be a preferred or greener option than landfill or recycling.

'I leave the car at home': how free buses are revolutionising one French city, Oct 15 [1]

Paris Gets Serious About Free Transit, May 16 [2]

Giftival Celebrates the Heart of the Global Gift Economy, August 18 [3]

Free stuff may be in some senses free, yet still have environmental costs. Questions to ask when accepting or acquiring free stuff:

A gift economy, gift culture or gift exchange is a mode of exchange where valuables are not sold, but rather given without an explicit agreement for immediate or future rewards. W

Freecycling or free recycling, is the act of giving away usable unwanted items to others instead of disposing of them in landfills. This term is most often associated with online groups who run mailing lists which offer items to members at no cost. W

Free shops and Give or take days, stalls or shops[edit | edit source] 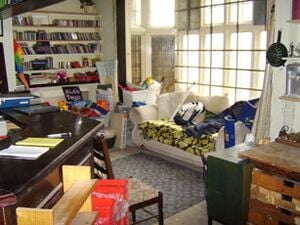 Inside a freeshop in Nottingham, UK

"Give-away shops", "freeshops" or "free stores" are stores where all goods are free. They are similar to charity shops, with mostly second-hand items—only everything is available at no cost. Whether it is a book, a piece of furniture, a garment or a household item, it is all freely given away, although some operate a one-in, one-out–type policy (swap shops). Today the idea is kept alive by the new generations of social centres, anarchists and environmentalists who view the idea as an intriguing way to raise awareness about consumer culture and to promote the reuse of commodities. W

Free content, or free information, is any kind of functional work, artwork, or other creative content that meets the definition of a free cultural work. A free cultural work is one which has no significant legal restriction on people's freedom:

Copyleft vs copyright: the gift of 'free' speech[edit | edit source]

Engineers, scientists and software developers have created open-source software projects such as the Linux kernel and the GNU operating system. They are prototypical examples for the gift economy's prominence in the technology sector and its active role in instating the use of permissive free software and copyleft licenses, which allow free reuse of software and knowledge. Other examples include: file-sharing, the commons, open access.

Giving circles are a form of participatory philanthropy where groups of individuals donate their own money or time to a pooled fund, decide together where to give these away to charity or community projects and, in doing so, seek to increase their awareness of and engagement in the issues covered by the charity or community project. Many circles, in addition to donating their money, also contribute their time and skills to support local causes. W

Pay it forward is an expression for describing the beneficiary of a good deed repaying it to others instead of to the original benefactor. In Ryan Hyde's book and movie (of the same name) it is described as an obligation to do three good deeds for others in response to a good deed that one receives. Such good deeds should accomplish things that the other person cannot accomplish on their own. In this way, the practice of helping one another can spread geometrically through society, at a ratio of three to one, creating a social movement with an impact of making the world a better place. W

Post growth can be considered an asset-based approach to community development, applied not only to community development but across a wide range of categories and in response to limits-to-growth challenges, as it seeks to build on the cultural and technological assets that already exist and are facilitating the emergence of post growth futures. W

The Really, Really Free Market (RRFM) movement is a horizontally organized collective of individuals who form a temporary market based on an alternative gift economy. The RRFM movement aims to counteract capitalism in a proactive way. It holds as a major goal to build a community based on sharing resources, caring for one another and improving the collective lives of all. Markets often vary in character, but they generally offer both goods and services. Participants bring unneeded items and food, as well as skills and talents such as entertainment or haircuts. A RRFM usually takes place in an open community space such as a public park or community commons. W

Burning Man is a week-long annual art and community event held in the Black Rock Desert in northern Nevada, in the United States. The event is described as an experiment in community, radical self-expression, and radical self-reliance. The event forbids commerce (except for ice, coffee, and tickets to the event itself) and encourages gifting. Gifting is one of the 10 guiding principles, as participants to Burning Man (both the desert festival and the year-round global community) are encouraged to rely on a gift economy. The practice of gifting at Burning Man is also documented by the 2002 documentary film Gifting It: A Burning Embrace of Gift Economy, as well as by Making Contact's radio show "How We Survive: The Currency of Giving [encore]". 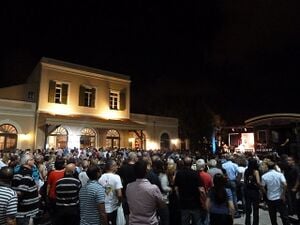 Nuit Blanche (French pronunciation: ​[nɥi ˈblɑ̃ʃ]) (White Night) is an annual all-night or night-time arts festival of a city. A Nuit Blanche typically has museums, private and public art galleries, and other cultural institutions open and free of charge, with the centre of the city itself being turned into a de facto art gallery, providing space for art installations, performances (music, film, dance, performance art), themed social gatherings, and other activities. 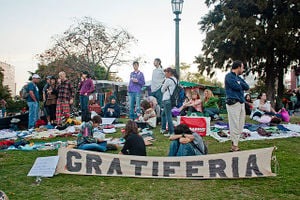 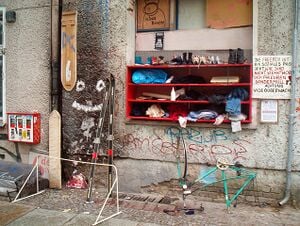 A Freebox in Berlin, Germany 2005, serving as a distribution center for free donated materials