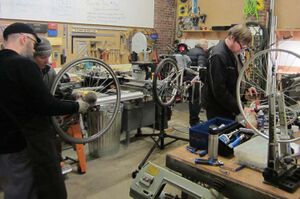 Sharing is a basic component of human interaction, and is responsible for strengthening social ties and ensuring a person’s well-being. [1] It can also be seen as a way of building a sense of community particularly via the process of sharing food, but also by a variety of other activities such as ridesharing or co-housing. It can be argued that sharing strengthens the resilience of local economies. Sharing programs have even be divised for whole cities. 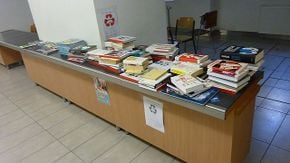 Bookcrossing bookcase at the University of Warsaw, organized by the Association of Polish Students

BookCrossing (also BC, BCing or BXing) is defined as "the practice of leaving a book in a public place to be picked up and read by others, who then do likewise." The term is derived from bookcrossing.com, a free online book club which was founded to encourage the practice, aiming to "make the whole world a library."

The 'crossing' or exchanging of books may take any of a number of forms, including wild-releasing books in public, direct swaps with other members of the websites, or "book rings" in which books travel in a set order to participants who want to read a certain book. The community aspect of BookCrossing.com has grown and expanded in ways that were not expected at the outset, in the form of blog or forum discussions, mailing lists and annual conventions throughout the world. W 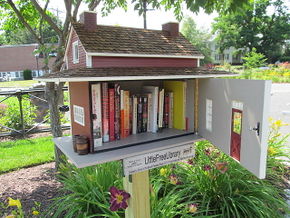 Little Free Libraries are a community movement in the United States and worldwide that offers free books housed in small containers to members of the local community. They are also referred to as community book exchanges, book trading posts, pop-up libraries, and Noox (Neighbourhood bOOk eXchange), amongst other terms. W 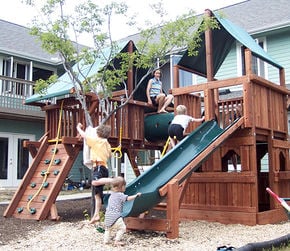 Cohousing playground next to Common House

A cohousing community is a type of intentional community composed of private homes supplemented by shared facilities. The community is planned, owned and managed by the residents – who also share activities which may include cooking, dining, child care, gardening, and governance of the community. Common facilities may include a kitchen, dining room, laundry, child care facilities, offices, internet access, guest rooms, and recreational features.

In describing New York City's first co-housing project, a New York Times article said co-housing "speaks to people who want to own an apartment but not feel shut off by it, lost in an impersonal city." W ...See also category:Cohousing 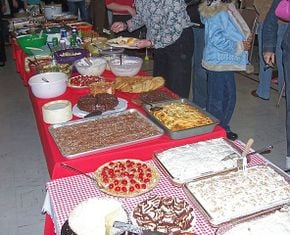 An assortment of food dishes at a church potluck

A potluck is a gathering of people where each person or group of people contributes a dish of food prepared by the person or the group, to be shared among the larger gathered group. Synonyms include: potluck dinner, spread, Jacob's join, Jacob's supper, faith supper, covered dish supper, dish party, bring and share, shared lunch, pitch-in, carry-in, bring-a-plate, dish-to-pass, fuddle. It is also referred to as a smorgasbord or potlatch. W

The purpose of Streetbank is to boost local communities by encouraging people to get to know their neighbours. W / StreetBank

Tool libraries allow patrons to borrow tools, equipment and "how-to" instructional materials, functioning either as a rental shop, with a charge for borrowing the tools, or more commonly free of charge as a form of community sharing. Given their increasing popularity and proven history of success, tool libraries and tool banks are now playing an exciting role in the burgeoning sharing economy and can be found everywhere from local public libraries to makerspaces. W

16 Tips to Crowdfund a Tool Library In Your Town, July 2015 Shareable

The traditional idea of a commons allows for sharing within a community. Customs and laws enabled the commons to be protected.

The commons is a general term referring to the cultural and natural resources accessible to all members of a society, including natural materials such as air, water, and a habitable earth. These resources are held in common, not owned privately.

Today, the commons are also understood within a cultural sphere. These commons include literature, music, arts, design, film, video, television, radio, information, software and sites of heritage. The crowdsourcing movement and among others Wikipedia are examples of the production and maintenance of common goods by certain communities in the form or videos, music, or encyclopedic knowledge that can be freely accessed by anyone without a central authority. Tragedy in the Wiki-Commons is avoided among others by community control and trading status and attention of individual authors within the Wikipedia community.

Caring for the commons is an act of individual stewardship (long-term care for a given resource for the benefit of oneself and others including the resource itself) and collective trusteeship. It is the very essence of being ‘whole’, the fundamental basis of interdisciplinarity. It is one of the few ways we have to acknowledge our debt to the past generations, and to embody our link to future generation. It shows we believe in ourselves as an enduring civilization, not an economy.

Caring for the commons means more than just regulating. Caretakers are needed, that is, a system nurturing societal cooperation, sharing of goods and thoughtfulness of generations to come. It entails establishing norms that reduce free riding and hold communities together. For our generation seems to be moving beyond viewing commons only as a norm, and taking action to enable and protect them in all spheres of our lives. W

Sharing economy is an umbrella term with a range of meanings, often used to describe economic and social activity involving online transactions. Originally growing out of the open-source community to refer to peer-to-peer based sharing of access to goods and services, the term is now sometimes used in a broader sense to describe any sales transactions that are done via online market places, even ones that are business to business (B2B), rather than peer-to-peer. For this reason, the term sharing economy has been criticised as misleading, some arguing that even services that enable peer-to-peer exchange can be primarily profit-driven. W In the case of "ride sharing" companies like Uber and Lyft, it is arguable that little to nothing is being shared, the cars belong to the drivers (who have to pay for their upkeep out of pocket), and the organizational structure is centralized instead of peer-to-peer.

The Mesh economy encompasses public and private sector organizations and firms working within the various realms of the sharing economy, the peer economy, the collaborative economy and the circular economy. The shift from defining unused value as waste to defining it as an opportunity to create value from more efficient resource use is the common factor among all mesh economy organizations. The understanding that information technology enables excess capacity in human capital to be more efficiently deployed to solve social and environmental challenges as articulated by Clay Shirky in his 2008 book, Here Comes Everybody: The Power of Organizing Without Organizations is an important influence. W

Public goods such as public transport and public open space are typically provided by a government using tax funds. This enables the provision of common goods and services which (due to the free rider problemW are not easily provided for by individuals or civil society).

Sharewiki, a wiki about sharing.