From Appropedia
Redirected from Seattle 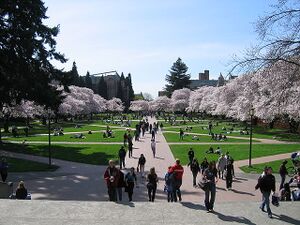 Seattle ( (listen) see-AT-əl) is a seaport city on the West Coast of the United States. It is the seat of King County, Washington. With a 2020 population of 737,015, it is the largest city in both the state of Washington and the Pacific Northwest region of North America. The Seattle metropolitan area's population is 4.02 million, making it the 15th-largest in the United States. Its growth rate of 21.1% between 2010 and 2020 makes it one of the nation's fastest-growing large cities.

Seattle is situated on an isthmus between Puget Sound (an inlet of the Pacific Ocean) and Lake Washington. It is the northernmost major city in the United States, located about 100 miles (160 km) south of the Canadian border. A major gateway for trade with East Asia, Seattle is the fourth-largest port in North America in terms of container handling as of 2021.

From Wikipedia:Seattle § Parks and recreation

Seattle's mild, temperate, marine climate allows year-round outdoor recreation, including walking, cycling, hiking, skiing, snowboarding, kayaking, rock climbing, motor boating, sailing, team sports, and swimming. In town, many people walk around Green Lake, through the forests and along the bluffs and beaches of 535-acre (2.2 km2) Discovery Park (the largest park in the city) in Magnolia, along the shores of Myrtle Edwards Park on the Downtown waterfront, along the shoreline of Lake Washington at Seward Park, along Alki Beach in West Seattle, or along the Burke-Gilman Trail. Gas Works Park features the preserved superstructure of a coal gasification plant closed in 1956. Located across Lake Union from downtown, the park provides panoramic views of the Seattle skyline. Also popular are hikes and skiing in the nearby Cascade or Olympic Mountains and kayaking and sailing in the waters of Puget Sound, the Strait of Juan de Fuca, and the Strait of Georgia. In 2005, Men's Fitness magazine named Seattle the fittest city in the United States.

Golden Gardens Park is a public park in Ballard, a neighborhood of Seattle, Washington. The park includes wetlands, beaches, hiking trails, and picnic and playground areas. The park's bathhouse was designated a historic landmark by the City of Seattle in 2005.

There are extensive multi-use car-free regional pathways linking the city and county to the surrounding areas, including the King County Regional Trails System, which has 175 miles (282 km) of trails throughout the county. Many of the trails were converted from former railways, including the popular Burke-Gilman Trail. The Seattle Department of Transportation aims to develop a 608.3-mile (979.0 km) network of bike lanes, including lanes on streets, protected bike lanes, and trails, within the city by 2034. A pilot program allowing private dockless bike sharing companies to operate within the city began in July 2017, making Seattle the first major city in North America to feature such a system. W

A 2022 study found that differences in per capita homelessness rates across the country are not due to mental illness, drug addiction, or poverty, but to differences in the cost of housing, with West Coast cities like Seattle having homelessness rates five times that of areas with much lower housing costs like Arkansas, West Virginia, Detroit, and Chicago even though the latter locations have high burdens of opioid addiction and poverty.: 1

How Seattle Is Dismantling a NIMBY Power Structure, Apr 3[1]

Can Retail Space be an Extension of the Public Realm? A Look at Seattle's Third Place Books, January 5[2]

These urban farmers want to feed the whole neighborhood — for free, March 13[3]

It's Not a Fairytale: Seattle to Build Nation's First Food Forest,[4] February 21

Seattle first in U.S. to mandate choice on yellow pages delivery,[6] May 5

Page data
Retrieved from "https://www.appropedia.org/w/index.php?title=Seattle_community_action&oldid=657105"
Cookies help us deliver our services. By using our services, you agree to our use of cookies.
Categories:
About Appropedia · Policies · Contact · Content is available under CC-BY-SA-4.0 unless otherwise noted.