From Appropedia
Redirected from Massachusetts 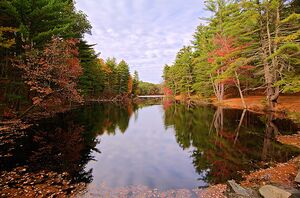 An image of the fall foliage in central Massachusetts. Author: rawheadrex
Location data
From Wikipedia:Massachusetts

Massachusetts (Massachusett: Muhsachuweesut [məhswatʃəwiːsət], English: (listen), ), officially the Commonwealth of Massachusetts, is the most populous state in the New England region of the Northeastern United States. It borders on the Atlantic Ocean and Gulf of Maine to the east, Connecticut and Rhode Island to the south, New Hampshire and Vermont to the north, and New York to the west. The state's capital and most populous city, as well as its cultural and financial center, is Boston. Massachusetts is also home to the urban core of Greater Boston, the largest metropolitan area in New England and a region profoundly influential upon American history, academia, and the research economy, Originally dependent on agriculture, fishing, and trade. Massachusetts was transformed into a manufacturing center during the Industrial Revolution. During the 20th century, Massachusetts's economy shifted from manufacturing to services. Modern Massachusetts is a global leader in biotechnology, engineering, higher education, finance, and maritime trade.

Massachusetts was a site of early English colonization: the Plymouth Colony was founded in 1620 by the Pilgrims of the Mayflower, and in 1630 the Massachusetts Bay Colony, taking its name from the indigenous Massachusett people, established settlements in Boston and Salem. In 1692, the town of Salem and surrounding areas experienced one of America's most infamous cases of mass hysteria, the Salem witch trials. In 1777, General Henry Knox founded the Springfield Armory, which, during the Industrial Revolution, catalyzed numerous important technological advances, including interchangeable parts. In 1786, Shays' Rebellion, a populist revolt led by disaffected American Revolutionary War veterans, influenced the United States Constitutional Convention. In the 18th century, the Protestant First Great Awakening, which swept Britain and the Thirteen Colonies, originated from the pulpit of Northampton preacher Jonathan Edwards. In the late 18th century, Boston became known as the "Cradle of Liberty" for the agitation there that later led to the American Revolution.

Massachusetts has played a powerful scientific, commercial, and cultural role in the history of the United States. Before the American Civil War, Massachusetts was a center for the abolitionist, temperance, and transcendentalist movements. In the late 19th century, the sports of basketball and volleyball were invented in the western Massachusetts cities of Springfield and Holyoke, respectively. Massachusetts became the first U.S. state to legally recognize same-sex marriage as a result of the Massachusetts Supreme Judicial Court's decision in Goodridge v. Department of Public Health in 2004, and elected the first openly lesbian U.S. state governor in 2022, by a wide margin—and Boston is a hub of LGBT culture and LGBT activism in the United States. Prominent American political dynasties have hailed from the state, including the Adams and Kennedy families.

350 Massachusetts - Greenovate Boston, community-driven movement to get Bostonians involved in reducing the city's greenhouse gas emissions 25% by 2020 and 80% by 2050

From Wikipedia:Climate change in Massachusetts

Climate change in Massachusetts affects both urban and rural environments, including forestry, fisheries, agriculture, and coastal development. The Northeast is projected to warm faster than global average temperatures; by 2035, the Northeast is "projected to be more than 3.6°F (2°C) warmer on average than during the preindustrial era."

Dudley Street Neighborhood Initiative, nonprofit, community-run organization based in Roxbury, Massachusetts. It was founded in 1984 by residents of the Dudley Street Neighborhood, along with members of the Riley Foundation, as an effort to rebuild the poverty-stricken community surrounding Dudley Square. It is known as the first community-run grassroots organization to gain "the power of eminent domain" by the Boston Redevelopment Authority, meaning the community controls its own development and the use of the land. W

Via the Dudley Street Neighborhood Initiative, residents worked with city and state officials to transfer ownership of 15 acres to a Community land trust (CLT), in which 1,300 parcels of land were placed. Now, those lots boast 225 new affordable homes, a 10,000-square-foot greenhouse, urban farm, playground, gardens, and other amenities one would only expect in more privileged, resource-rich neighborhoods.[1]

From Wikipedia:Wind power in Massachusetts

The U.S. state of Massachusetts has vast wind energy resources offshore, as well as significant resources onshore. The 2016 update to the states's Clean Energy and Climate Plan had a goal of reducing 1990 baseline greenhouse gas emissions levels by 25% by 2020. Current goals include installing 3,500 megawatts (MW) of offshore wind power in the state by 2035. However, as of Q4 2021 the state had only 120 MW of wind powered electricity generating capacity, responsible for generating 0.9% of in-state electricity production. The state has awarded contracts to two offshore projects, the 800 MW Vineyard Wind project and 804 MW Mayflower Wind project. Construction began on the Vineyard Wind 1 project on November 18, 2021, after a long fight for approval.Commonwealth Wind was selected for development in 2021.

wikipedia:List of nature centers in Massachusetts

Planting an urban fruit tree is more than a lifetime commitment — it is an intergenerational civic responsibility. Each summer, in Greater Boston, a huge amount of backyard fruit falls to the ground and sidewalk, where it rots and creates a mess. Property owners and municipalities are often pressured to remove these "nuisances," while many urban residents are struggling to access local and organic food sources. The League of Urban Canners has developed a network of individuals to map, harvest, preserve, and share this otherwise wasted fruit. They make agreements with property owners to share the work of fruit harvesting and preserving, as well as tree and arbor pruning. The preserved fruits are shared between property owners (10 percent), preservers (70 percent), and harvesters (20 percent). Each season the completely volunteer-run enterprise harvests and preserves about 5,000 pounds of fruit from a database of more than 300 trees and arbors. Myriad acts of cooperation sustain this urban commons, in which harvesters, property owners, preservers, and eaters learn to share responsibility, resources, and care for each other and their urban environment. —Oona Morrow[2]

With nearly a third of Bostonians using public transit for their commute to work, Boston has the fifth-highest rate of public transit usage in the country. Nicknamed "The Walking City", Boston hosts more pedestrian commuters than do other comparably populated cities. Owing to factors such as the compactness of the city and large student population, 13% of the population commutes by foot, making it the highest percentage of pedestrian commuters in the country out of the major American cities. As of 2013, Walk Score ranks Boston as the third most walkable US city.[3]

Wellspring Cooperative, "creating an engine for new, community-based, worker-owned companies in inner-city Springfield, based on the purchasing power of area anchor institutions."

The first senior village began in Boston's Beacon Hill neighborhood in 2001 when about a dozen elders wanted to avoid going to a nursing home. They founded a nonprofit to co-purchase the services retirement communities provide, but get them where they already live. They became the first "virtual retirement community" offering services such as transportation, food delivery, home repairs, dog walking, and social activities. After four years of successful operation, The New York Times published a feature story about Beacon Hill Village. The idea began to spread.

To support those who were interested in following their example, Beacon Hill Village published a how to manual and began helping other elders set up villages. Eventually, the Village to Village Network was formed to launch these villages. Today there are over 200 villages around the world with more than 150 forming.

"People are excited and want to move to where villages are, I think villages benefit the whole person; mind, body and soul. As we educate the federal government on how well it's working, we'll start seeing even more."[4]

Check Out This Seed Library in Boston and Learn How to Start Your Own, Nov 27[6]

This Massachusetts Town Shows What a Sustainable Economy Looks Like, Jul 12[8]

Teenagers force Massachusetts to act on greenhouse gases via lawsuit, May 19[11]

How One Boston Neighborhood Stopped Gentrification in Its Tracks, January 28[12]

How Boston is rethinking its relationship with the sea, October 27[13]

A Worker Cooperative That Proves Alternative Economic Systems Aren't Only For The Privileged, Apr 14[15]

Boston Doctors Can Now Prescribe You a Bike, April 9[16]

Page data
Retrieved from "https://www.appropedia.org/w/index.php?title=Massachusetts_community_action&oldid=668785"
Cookies help us deliver our services. By using our services, you agree to our use of cookies.
Categories:
About Appropedia · Policies · Contact · Content is available under CC-BY-SA-4.0 unless otherwise noted.