From Appropedia
Redirected from Barcelona 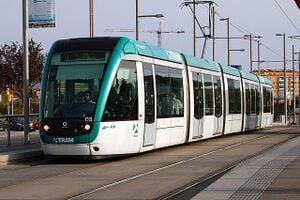 Barcelona ( BAR-sə-LOH-nə, Catalan: [bəɾsəˈlonə], Spanish: [baɾθeˈlona]) is a city on the coast of northeastern Spain. It is the capital and largest city of the autonomous community of Catalonia, as well as the second most populous municipality of Spain. With a population of 1.6 million within city limits, its urban area extends to numerous neighbouring municipalities within the Province of Barcelona and is home to around 4.8 million people, making it the fifth most populous urban area in the European Union after Paris, the Ruhr area, Madrid, and Milan. It is one of the largest metropolises on the Mediterranean Sea, located on the coast between the mouths of the rivers Llobregat and Besòs, and bounded to the west by the Serra de Collserola mountain range, the tallest peak of which is 512 metres (1,680 feet) high.

Barcelona contains sixty municipal parks, twelve of which are historic, five of which are thematic (botanical), forty-five of which are urban, and six of which are forest. They range from vest-pocket parks to large recreation areas. The urban parks alone cover 10% of the city (549.7 ha or 1,358.3 acres). The total park surface grows about 10 ha (25 acres) per year, with a proportion of 18.1 square metres (195 sq ft) of park area per inhabitant.

The word Decidim translated from Catalan means we decide, and it's the name of Barcelona's digital infrastructure for participatory democracy. One part functional database and one part political statement, organizers say Decidim is key to a broad digital transformation that is taking place in Barcelona — its institutions, markets, and economy. Organized by the Barcelona City Council, Barcelona's citizens participate in a new digital commons, and its organizers hope that technology can improve democratic participation and foster good government. The open-source platform allows the public to participate directly in government as they would a form of social media, and they have had early success. The city council hosted several organizing events to decide on a strategic plan, and nearly 40,000 people and 1,500 organizations contributed 10,000 suggestions.

Decidim was born when a young protest movement in Spain swept into power, according to Xabier Barandiaran, a project leader, who compares the fledgling political party to the Occupy movement in the U.S. Its leadership's first goal was to create a platform for open strategic planning for the city. "People were in the streets and saying let's participate in democracy, let's write a strategic plan," Barandiaran said.

What developed was an open-source software that embodied the group's transformation plan, a digital common where citizens can have a say in government — the code is available on Github. "We decided how we would decide," he said.[1]

Bicing is a Bicycle-sharing system in the city of Barcelona, Catalonia, Spain, which was implemented in March 2007, promoted by the City Council. The municipal company Barcelona de Serveis Municipals (B:SM) is the manager of the service, while the exploitation concession corresponds to Pedalem Barcelona since 2019, a Temporary Union of Companies formed by CESPA (Ferrovial Services) and PBSC. Between 2007 and 2018, Clear Channel was the company in charge of this task. It is similar to the Vélo'v service in Lyon or Vélib' in Paris, and uses the same bicycles and stations as used in Stockholm, Oslo, and Zaragoza. Its purpose is to cover small and medium daily routes within the city in a climate-friendly way, eliminating the pollution, roadway noise, and traffic congestion that motor vehicles create.

The bike-sharing system was received by residents with great enthusiasm, covering approximately 70% of the city area, including Ciutat Vella, the Eixample and some parts of Sant Martí and Gràcia. However, stations have not been placed in areas where the grade is greater than four percent, such as the hilly areas of Montjuïc and Tibidabo. Several neighboring cities have asked for the service to be extended to their cities as well, and studies are underway on how to implement this for the wider metropolitan area.

In 2019 the network started a large 7,000 bike expansion with pedal assisted bikes from Canadian firm PBSC.

The city of Barcelona has a great many neighborhood markets that provide meat, fish, produce, and more on a daily basis, and are still vital to the urban life of the city. Many of the city's historic markets date to the mid-to-late 19th century, as the city was experiencing rapid growth due to the creation of the Eixample. Each neighborhood has at least one market and many have up to 4. Markets in the city are typically large enclosed spaces located centrally in the neighborhoods they serve. The larger markets are arranged into departments depending on the product. In addition, there exist many non-food based markets around the city, such as those that offer art or secondhand goods. The city's oldest markets are located in the Ciutat Vella and Eixample, with newer markets along the fringes of the city. Many of the older markets, such as La Boqueria, not only provide food and goods for their surrounding neighborhoods, but are tourist attractions in their own right, as they provide an essential glimpse into everyday life in the city. The markets are administered under the Mercats Municipals de Barcelona wing of the city's government.

From Wikipedia:List of markets in Barcelona

One of the leaders in the sharing cities movement has been Barcelona, the capital of Spain's Catalonia region, with more than 1,000 worker-owned enterprises and cooperatives in operation working in 28 different economic areas including sharing of culture, energy, agro-agriculture, and consumption. This includes the Xarxa de Consum Solidari network of consumers' cooperatives and La Borda, a housing cooperative. One neighborhood, Sants, has 50 cooperatives alone, including an architecture office, a bookshop and a music club, all owned by residents and all of which keep their profits within the community. Even the famous Barcelona FC soccer club — one of the best teams in Europe — is a cooperative sporting association with 175,000 members, all of whom have a voice in deciding the direction and future of the club.

The movement has roots going back more than 60 years in Spain, to the founding of the Mondragon Corporation, a federation of more than 100 cooperatives that employs more than 73,000 people. By one measure, Mondragon ranks among Spain's top 10 corporations.[2]

The city of Barcelona has launched an experiment testing several potential reforms of its anti-poverty programs, including new social programs as well as unconditional cash payments.[3]

Barcelona is also home to numerous social centres and illegal squats that effectively form a shadow society mainly made up of the unemployed, immigrants, dropouts, anarchists, anti-authoritarians and autonomists. Peter Gelderloos estimates that there around 200 squatted buildings and 40 social centres across the city with thousands of inhabitants, making it one of the largest squatter movements in the world. He notes that they pirate electricity, internet and water allowing them to live on less than one euro a day. He argues that these squats embrace an anarcho-communist and anti-work philosophy, often freely fixing up new houses, cleaning, patching roofs, installing windows, toilets, showers, lights and kitchens. In the wake of austerity, the squats have provided a number of social services to the surrounding residents, including bicycle repair workshops, carpentry workshops, self-defense classes, free libraries, community gardens, free meals, computer labs, language classes, theatre groups, free medical care and legal support services. The squats help elderly residents avoid eviction and organise various protests throughout Barcelona. Notable squats include Can Vies W and Can Masdeu W. Police have repeatedly tried to shut down the squatters movement with waves of evictions and raids, but the movement is still going strong. W

Page data
Retrieved from "https://www.appropedia.org/w/index.php?title=Barcelona_community_action&oldid=695260"
Cookies help us deliver our services. By using our services, you agree to our use of cookies.
Categories:
About Appropedia · Policies · Contact · Content is available under CC-BY-SA-4.0 unless otherwise noted.