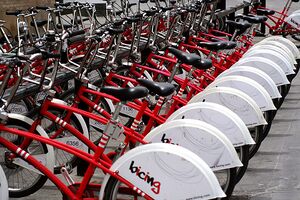 Bicing is urban public transportation in Barcelona, Spain, made up of 6000 bicycle.

Bike-sharing is not a new concept but the Bicing program in Barcelona, Spain has taken the idea of a sustainable city to another level. Just one person switching from driving to cycling to work over a 10km trip each way saves 1.3 tonnes CO2 emissions a year.[1]

What is Bicing?[edit | edit source]

Bicing is an alternative public transportation in the city of Barcelona that first appeared in March of 2007 with 200 bicycles to rent and 14 stations spread around the city. As of May 2009 there are currently 6,000 bikes and 401 stations in Barcelona.[2] The purpose of the system is to cover the short everyday journeys that are made within a city via bicycle, reducing the city's carbon footprint. An annual membership is required. Most stations are located near entrances of public transportation like the metro, public car parks and train stations. The idea is to use the bikes to easily maneuver around the city without having to rely on cars, buses or taxis. Bicing's yearly budget runs around $13 million. Bicing is financed through member's dues, parking fees, and through their sponsor Clear Channel.[3]

How to Get Started[edit | edit source] 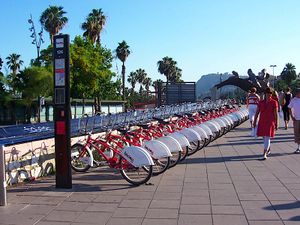 There are two ways to join the Bicing community. Through their website, Bicing or in person at the Bicing Office in Barcelona - complete the registration and an user card will be sent via mail. Once the card arrives it can be activated on the website and is then ready to be used at the various stations around the city. At the station of your choosing, you swipe your card at the kiosk where it will assign you a bike from the rack of available rentals. Take your bike, ride it for up to two hours, return at the nearest station. Bring the bike back to an available rack where it will automatically lock itself, no need to swipe your card again, and you can go about your day.

A yearly fee of €30 will go toward the usage of a SmartBike of up to two hours a day The first 30 minutes are free of charge. A fee of €.50 will be charged for every half hour there after.[4] After two hours a penalty of €3 an hour will occur. Keep in mind that a typical SmartBike ride is 20 minutes.[5] There is a charge of €150 if a user does not return the bike to a station within 24 hours of renting the bike.

What is a SmartBike?[edit | edit source]

A SmartBike is a three geared bicycle made of stainless steel and aluminum, weighing around 16.5 kg.[6] The bikes are equipped with headlights,back lights and are a bright red color. SmartBike is a development of Clear Channel Outdoors which is also a sponsor and partner of the Barcelona Bicing system.[7]

To keep up with technology bicing.com offers iBicing - which is the ability to check availability with an iPhone application or text messages.[8] A real time map of available stations is also available on the website.

There is no doubt that the environmental friendly Bicing program is a success in Barcelona. It is a cheap and healthy solution to lower Barcelona's CO2 emissions. A similar program called Bizi has been established in Zaragoza, Spain.