A bicycle, or bike, is a 2-wheeled vehicle for human transportation. They are generally human-powered by pedals, though see the #Electric bicycles section below. Bicycles are used for cycling. 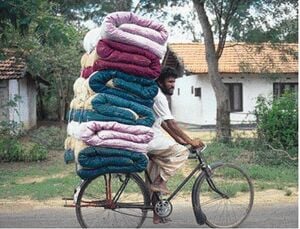 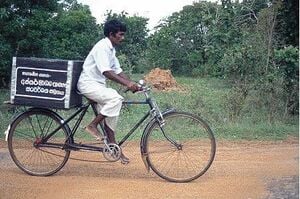 Extended bicycle Photo: Practical Action
Panniers and luggage carriers can be installed unto regular bicycles, ie to allow use of the bicycle as a freight bicycle.

Bicycles can be equipped with lever arms, in order to reduce the effort required for the bicycling. The first bicycle with a lever arm was built by Maurice Houbracken. The effort required "reportedly" reduced the effort required by 50%. After a conversation with the builder though, it is clear that the system was built immediately without much prior designing. This would mean that much improvement is still possible (ie the lightgreen lever arm could possibly be attached elsewhere, on a more favorable position, and the angle might also be changed). Also, by increasing the lever arm, the fabricator stated that a 100% effort reduction is definitely possible, and perhaps that a redesign is thus useful for other purposes (ie vehicles where the driver takes another position; ie such as with the AT e-velomobile). Also, a similar lever arm could also be used for purposes other than transportation (ie winching, ...). 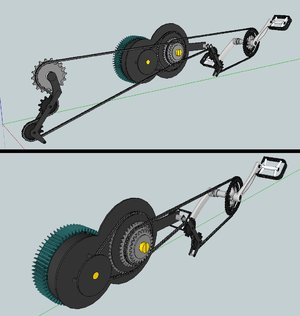 Several (traditional-styled) bikes have been produced mainly from bamboo. Price ranges of these vary greatly.[1][2][3][4]