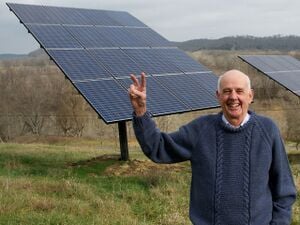 "The name of our proper connection to the Earth is "good work" [1] / Sustainable livelihood "Laugh. Laughter is immeasurable. Be joyous though you have considered all the facts." "In Human culture lies the preservation of wildness." "Great problems call for many small solutions."

"Whether we and our politicians know it or not, Nature is party to all our deals and decisions, and she has more votes, a longer memory, and a sterner sense of justice than we do."

"A good community, as we know, insures itself by trust, by good faith and good will, by mutual help, A good community, in other words, is a good local economy." [2] "Eaters must understand that eating takes place inescapably in the world, that it is inescapably an agricultural act, and that how we eat determines, to a considerable extent, how the world is used." |style="background:white" | "...Only the purpose of a coherent community, fully alive both in the world and in the minds of its members, can carry us beyond fragmentation, contradiction, and negativity, teaching us to preserve, not in opposition but in affirmation and affection, all things needful to make us glad to live." [3]

"The first thing we must begin to teach our children (and learn ourselves) is that we cannot spend and consume endlessly. We have got to learn to save and conserve. We do need a "new economy", but one that is founded on thrift and care, on saving and conserving, not on excess and waste. An economy based on waste is inherently and hopelessly violent, and war is its inevitable by-product. We need a peaceable economy."

"Since the beginning of the conservation effort in our country, conservationists have too often believed that we could protect the land without protecting the people. This has begun to change, but for a while yet we will have to reckon with the old assumption that we can preserve the natural world by protecting wilderness areas while we neglect or destroy the economic landscapes - the farms and ranches and working forests - and the people who use them. That assumption is understandable in view of the worsening threats to wilderness areas, but it is wrong. If conservationists hope to save even the wild lands and wild creatures, they are going to have to address issues of economy, which is to say issues of the health of the landscapes and the towns and cities where we do our work, and the quality of that work, and the well-being of the people who do the work."

"...to take animals off farms and put them on feedlots is to take an elegant solution — animals replenishing the fertility that crops deplete — and neatly divide it into two problems: a fertility problem on the farm and a pollution problem on the feedlot. The former problem is remedied with fossil-fuel fertilizer; the latter is remedied not at all." Michael Pollan W quotes Wendell Berry [4]