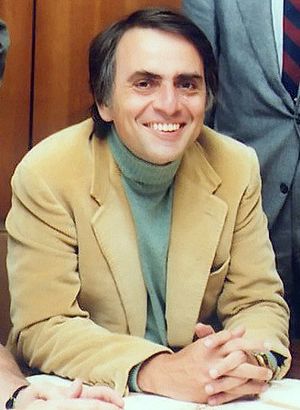 "Anything else you're interested in is not going to happen if you can't breathe the air and drink the water. Don't sit this one out. Do something. You are by accident of fate alive at an absolutely critical moment in the history of our planet." "We are like butterflies who flutter for a day and think it's forever."

"If we keep on with business as usual, the Earth will be warmed more every year; drought and floods will be endemic; many more cities, provinces, and whole nations will be submerged beneath the waves - unless heroic worldwide engineering countermeasures are taken. In the longer run, still more dire consequences may follow, including the collapse of the West Antarctic ice sheet, and the inundation of almost all the coastal cities on the planet."[1] "Those who are skeptical about carbon dioxide greenhouse warming might profitably note the massive greenhouse effect on Venus. No one proposes that Venus's greenhouse effect derives from imprudent Venusians who burned too much coal, drove fuel-inefficient autos, and cut down their forests. My point is different. The climatological history of our planetary neighbor, an otherwise Earthlike planet on which the surface became hot enough to melt tin or lead, is worth considering — especially by those who say that the increasing greenhouse effect on Earth will be self-correcting, that we don't really have to worry about it, or (you can see this in the publications of some groups that call themselves conservative) that the greenhouse effect is a "hoax"."

Page data
Retrieved from "https://www.appropedia.org/w/index.php?title=Carl_Sagan&oldid=656467"
Cookies help us deliver our services. By using our services, you agree to our use of cookies.
Categories:
About Appropedia · Policies · Contact · Content is available under CC-BY-SA-4.0 unless otherwise noted.