Quotes about community action and the power of community 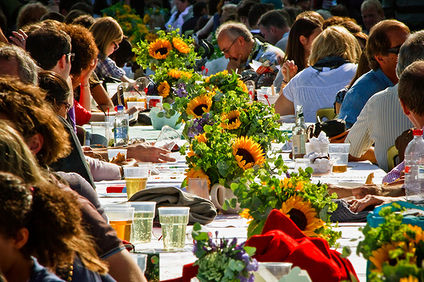 So that’s why I’ve come to think that organizing is such a key thing, and such a key part of being human is… All an organizer is someone who’s able to talk with the people around them and get them working together in the same direction. And that’s desperately what we need right now. That’s the closest to a kind of elixir that I have found to allow people to get the kind of courage that’s required to stare, quite plainly, at the crisis that we’re in, and not blink, and not turn away, and if they’re shedding a tear, which they should be, nonetheless to be able to see through those tears to where we need to be, and how we’re going to get there.
— Bill McKibben, Engaged Buddhism / What can we do about the Climate Crisis?

Democracy cannot longer be a 'thing' that we do once every x amount of years. You get good at being democratic the more often you practice it. Civic technologies are organised around participation, therefore granting the opportunity to get more experience, to assess different points of view, to build arguments, to accept we don't know everything. Moreover, a grass-roots collection of data creates a very different landscape and understanding of cities by the citizens, at the very least this is why we feel it is worth doing.
— Mara Balestrini, magazine.ouishare.net

"...Only the purpose of a coherent community, fully alive both in the world and in the minds of its members, can carry us beyond fragmentation, contradiction, and negativity, teaching us to preserve, not in opposition but in affirmation and affection, all things needful to make us glad to live."
— Wendell Berry, from a speech titled The Purpose of a Coherent Community delivered on September 29, 2004 to the National Preservation Conference of the National Trust for Historic Preservation at Louisville, Kentucky - USA / Source: Metacollab Wikia quotes

Democracy is a promise that the excluded voices are needed to form a greater whole.
— Alan Briskin

The real work of creating a different world is to take responsibility upon ourselves to lead that change to create the sort of world we want.
— Grace Lee Boggs, YES! Magazine

Empowering the individual and underinvesting in the collective is our great macro danger as a society.
— Craig Charney

"Civic networks should be respected and promoted as sources of empowered citizenship."

"Civic networks emerge in the space beyond government or the market, serving citizens need for knowledge that can enable them to be more active, resourceful, creative and influential."
— Professor Stephen Coleman, Oxford Internet Institute, University of Oxford

"We see people-power-place in action when our neighbourhoods, villages, towns or cities become a focus of common interest. When people make their place a community of interest. When communities of place become communities of interest we begin to develop a set of in-common aims, objectives and intentions. Dreams and aspirations for neighbourhoods are discussed and opportunities to make it happen are pursued, in common. When things begin to change physically, behaviour change follows and, importantly, neighbourhood we-ness builds to oversee a reinvention of place and community. Any enabling processes that support and encourage this regaining of place by its people will likely involve only light touch governance to enable the spirit of place to re-emerge. I anticipate that such initiatives will become the sustaining force behind flourishing communities."
— Prof. Rhiannon Corcoran, Academic Lead, Community Wellbeing Evidence Programme. Institute of Psychology, Health and Society, University of Liverpool., whatworkswellbeing.org

Aleida Arzeta dreams of a community center that would also function as a café and bakery, and a place where families could share social and emotional support. Aleida, Gloria and I fantasize about the community center of their dreams. They envision a comprehensive center with education, business, social and health supports all in one – not a place where "experts" would provide "services" to people in need, but a place where real people would support each other, because we are all experts in something, and we all have needs.
— Kate Duva, transitionnetwork.org, Chicago, Community resources

Where I live in Marin County, it was citizen action that instigated the preservation of hundreds of thousands of acres as open space and parkland; it was not government taking the initiative. That mostly happened in the pre-Internet days. Now that we've got the Net and there's more talent, creativity and freedom in the civic sector than in government, it's time that citizens once again take the lead in building tools and solving problems for their localities.
— cfigallo, pResilience, April 7, 2009, Community involvement

Lonny Grafman
I love to see projects that make the world a better place manifest. The way a project manifests from inception, brainstorming, researching, creating, testing, iterating, promoting, etc. always fill me with wonder and excitement. There is no one way that it unfolds, but my favorite ways to be part of are those that are collaborative.
— Lonny Grafman, Savoring Optimism: Interview with Lonny Grafman

We're like a road show. We don't have a space, so we use the community.
— Lucy Gomez-Feliciano, Early Learning and Health Director of Logan Square Neighborhood Association. transitionnetwork.org / Chicago, Community resources

We must abandon the conceit that individual, isolated, private actions are the answer. They can and do help. But they will not take us far enough without collective action.
— Al Gore, acceptance of the Nobel Peace Prize, December 10 2007 [2]

We now understand better than ever that innovation is very often a social, interactive process rather than one of individual creativity, and that networks play a vital role in the creation and the transfer of new knowledge and innovation.
— David H Hargreaves

"For sure, the days of neighbourhood online networks are not far off. Local nets will give you all this and better, more efficiently, less expensively, with genuine options for user-involvement and interaction - and by extension in my view, conversational democracy. But without the paper."
— Kevin Harris, Kevin Harris, May 5 2009 ...Communities online UK

What of the relationships built, the degree to which people feel more hopeful, skilled, connected, positive, resilient? What are the gardens actually growing? What are the community energy companies actually generating? What are the construction projects actually building? And these are just a fraction of the thousands of Transition groups in now over 50 countries. And these are just a fraction of the wider, diverse, and innovative networks of grassroots responses happening around the world.
— Rob Hopkins, Why COP21 matters, and why I'm going. Rob Hopkins. October 29, Transition Network

Cities have the capability of providing something for everybody, only because, and only when, they are created by everybody.
— Jane Jacobs, Urban sustainability

"Most people participate in their communities not as part of organised groups, but in doing acts of kindness"
— Professor Carolyn Kagan, Professor of Community Social Psychology at Manchester Metropolitan University.

Each time a man stands up for an ideal, or acts to improve the life of others, or strikes out against injustice, he sends a tiny ripple of hope, and those ripples, crossing each other from a million different centers of energy, build a current which can sweep down the mightiest walls of oppression and resistance.
— Robert F. Kennedy

...and for many others today, re-engagement is essential for long-term vitality. This requires re-connecting with participative ways of knowing.
— Esko Kilpi, medium.com / Community involvement

To the forces of community, the world is inherently nurturing, compassionate, and overflowing with creative abundance and opportunity. In the world of community we consider violence and conflict to be irrational, because they are self-destructive — a violation against the sacred spiritual unity that is the source of life and the ground of all being. Meaning and purpose are found in equitably sharing power and resources to secure the well-being of all as we engage in a cooperative exploration of life's infinite creative possibilities."
— David Korten

No other person can be as expert about your life, your values, your hopes than you are. And any process that tries to define the future and does not find a way to include your expertise on your life is doomed to fail
— Gary Lawrence, former chief planner for the city of Seattle

"Many of our biggest social challenges will only be met if we promote self-organising solutions."
— Charles Leadbeater

It is the millions of acts by ordinary people that will eventually make a difference.
— Hamish McRae

...if we are to move from charity to justice, helping our community members who are most marginalized to be heard is one of the most effective and enduring things we can do. Let's restore one of the strengths of our sector, and one of our sacred duties. Let's mobilize the full power of our community, constantly and unapologetically, in service of justice. We must intellectualize less and organize more. The soul of our sector, and the well-being of our community, depends on it.
— Nonprofit AF

Community building power comes from the living database that the participants create and use together informally as they help each other solve problems, one to one and many to many. The web of human relationships that can grow along with the database is where the potential for cultural and political change can be found.
— Howard Rheingold

"The only thing that will redeem mankind is cooperation."
— Bertrand Russell

"you can never move faster than the speed of trust" when it comes to community engagement.
— Cormac Russell, @CormacRussell on twitter

Individually, we are one drop. Together, we are an ocean
— Ryunosuke Satoro

The most powerful force in American democracy is the connection between and among citizens.
— David B. Smith, NCoC's Executive Director, ncoc.net

Somewhere, there are people to whom we can speak with passion without having the words catch in our throats. Somewhere a circle of hands will open to receive us, eyes will light up as we enter, voices will celebrate us whenever we come into our own power Community means strength that joins our strength to do the work that needs to be done. Arms to hold us when we falter. A circle of healing. A circle of friends. Someplace where we can be free.
— Starhawk

Reciprocity is key to the power of networks, the alchemy of mutual give and take over time turning to a golden trust...
— Karen Stephenson

"If I had to choose one word - it would be Generosity. It's about having the generosity of spirit to recognise that however fantastic you think your idea is there are loads and loads of other people out there who have also got great ideas and who have been working really hard...Realise that you are surrounded by people who are trying to do good, but haven't quite managed to crack it yet. If you've got a great idea go out and find them and say 'How can my idea help you?' rather than thinking about 'How can I start from scratch?'. It's about basic human generosity."
— Matthew Taylor

In democratic countries knowledge of how to combine is the mother of all other forms of knowledge; on its progress depends that of all the others.
— Alexis de Tocqueville

The most common way people give up their power is by thinking they don't have any.
— Alice Walker, As quoted in The Best Liberal Quotes Ever: Why the Left is Right (2004) by William P. Martin, p. 173, Community involvement