From Appropedia
Redirected from Kentucky 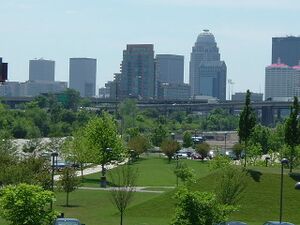 Kentucky (US: (listen) kən-TUK-ee, UK: ken-), officially the Commonwealth of Kentucky, is a state in the Southeastern region of the United States and one of the states of the Upper South. It borders Illinois, Indiana, and Ohio to the north; West Virginia and Virginia to the east; Tennessee to the south; and Missouri to the west. Its northern border is defined by the Ohio River. Its capital is Frankfort, and its two largest cities are Louisville and Lexington. Its population was approximately 4.5 million in 2020.

From Wikipedia:Kentucky § Natural environment and conservation

Kentucky has been part of two of the most successful wildlife reintroduction projects in United States history. In the winter of 1997, the Kentucky Department of Fish and Wildlife Resources began to re-stock elk in the state's eastern counties, which had been extinct from the area for over 150 years. As of 2009, the herd had reached the project goal of 10,000 animals, making it the largest herd east of the Mississippi River.

The state also stocked wild turkeys in the 1950s. There were reported to be fewer than 900 at one point. Once nearly extinct here, wild turkeys thrive throughout today's Kentucky. Hunters officially reported a record 29,006 birds taken during the 23-day season in spring 2009.

In 1991 the Land Between the Lakes partnered with the U.S. Fish and Wildlife Service for the Red Wolf Recovery Program, a captive breeding program.

Kentuckians For The Commonwealth, grassroots social justice organization with more than 8,000 members. Though statewide, KFTC has deep roots in eastern Kentucky where coal mining remains the dominant industry. KFTC is a multi-issue organization of working-class families, with a history of working for land reform and environmental justice. W

In the state of Kentucky, USBR 76 is signed, and a map is available as part of a state bicycle tours publication.

Page data
Retrieved from "https://www.appropedia.org/w/index.php?title=Kentucky_community_action&oldid=667948"
Cookies help us deliver our services. By using our services, you agree to our use of cookies.
Categories:
About Appropedia · Policies · Contact · Content is available under CC-BY-SA-4.0 unless otherwise noted.