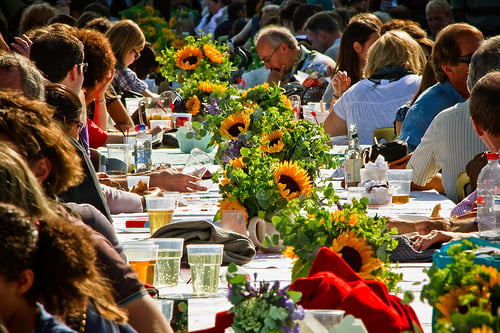 This page is the beginnings of a portal for Community involvement. The majority of our information about this is collated via our place pages ...Near you.

An empowered, self-actualized community of active citizens enriches and sustains the quality of life of all who live there.

Community involvement is used here as a deliberatly broad term to include for example Participatory W and Deliberative democracy. W

Community involvement is about people and communities being able to play a full part in decision-making, for example local decision-making, and so influence the decisions which affect their lives. It is also about community empowerment, for example through access to appropriate information and adivce.

Proper community involvement is not tokenistic. Instead it is on-going, valued, meaningful, provides extensive opportunity and is genuinely and extensively influential.

Proper community involvement is not about allowing mere comment on decisions that have already largely been taken. Instead it begins at the design stage, the very beginning of any project or programme.

Proper community involvement does not include measures of success being foisted upon the community, or worse still simply being ignored. Instead it gives a primary role to the community in judging how successful a project or programme has been.

The co-production of public services has been defined in a variety of ways - e.g. "Co-production means delivering public services in an equal and reciprocal relationship between professionals, people using services, their families and their neighbours" (new economics foundation) or "the public sector and citizens making better use of each other's assets and resources to achieve better outcomes and improved efficiency" (Governance International).

Experiments on co-production on public services have been launched in many countries, from Denmark to Malaysia, the UK and the USA. W

Participatory budgeting (PB) is a process of democratic deliberation and decision-making, and a type of participatory democracy, in which ordinary people decide how to allocate part of a municipal or public budget. Participatory budgeting allows citizens to identify, discuss, and prioritize public spending projects, and gives them the power to make real decisions about how money is spent. When PB is taken seriously and is based on mutual trust local governments and citizen can benefit equally. In some cases PB even raised people's willingness to pay taxes.

A comprehensive case study of eight municipalities in Brazil analyzing the successes and failures of participatory budgeting has suggested that it often results in more equitable public spending, greater government transparency and accountability, increased levels of public participation (especially by marginalized or poorer residents), and democratic and citizenship learning. W

Participatory justice is the use of alternative dispute resolution, such as mediation, conciliation, and arbitration, in criminal justice systems, instead of, or before, going to court. It is sometimes called "community dispute resolution". W

Participatory planning is an urban planning paradigm that emphasizes involving the entire community in the strategic and management processes of urban planning; or, community-level planning processes, urban or rural. It is often considered as part of community development. Participatory planning aims to harmonize views among all of its participants as well as prevent conflict between opposing parties. In addition, marginalized groups have an opportunity to participate in the planning process. W

"At the national level, each individual shall have appropriate access to information concerning the environment that is held by public authorities, including information on hazardous materials and activities in their communities, and the opportunity to participate in decision-making processes. States shall facilitate and encourage public awareness and participation by making information widely available. Effective access to judicial and administrative proceedings, including redress and remedy, shall be provided." W