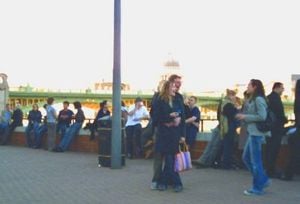 "How often do we "meet," without in fact "meeting" one another, mind to mind and heart to heart?" Rosa Zubizarreta

First and foremost ways of designing conferences, or any real life face to face, group conversations that were not limited in their reuse in any way by copyright. So stuff is reusable, both the actual content of the conference and the design principles (of the gathering) are completely open for everyone to add to and improve. The design stuff - the design principles, and all experiential knowledge that people want to contribute from putting them into practice is share and share alike.

A focus on the face to face stuff[edit | edit source]

It can include working with technology but is also about, and has a primary focus on the real life, non-virtual, non-electronic, non-technology stuff. There's a huge amount of stuff on using the technology for collaboration but as far as I can see very little on designing social, real life, fact to face events - so that networks of such events could begin to replicate the sort of collaboration being achieved online.

The proposal here is to develop a set of ideas, principles and suggestions, without any implication that anyone has to accept any sort of whole package approach. The design is about unlocking the potential of gatherings to collaborate, but people come together for a whole variety of reasons, some purely social and there is no implication that gatherings have to be collaborative or collaborative to any particular extent other than that which the gatherings themselves choose.

Having said the above there is the opportunity to focus on how to design meetings or gatherings where there is at least some desire to 'get things done' or be 'more than a talk shop' or more than just a social gathering. Implicit in this is that it is not case of either face to face or online but how to design the face to face events when these are as a matter of course complemented by online collaboration.

There may be much better names than OSCD and Open group work. Your suggestions welcome!

Tradional style conferences are often about maintaing the status quo, business as usual. This can be reinforced through a variety of means including:

"I've been lucky enough to be able to attend many gatherings focused on economic and “new story” change over the last several years. All of them disappointed me in their structure, with hierarchies either implicit or explicit alongside the old trope of “those who know” lecturing to “those who don't know.” This all becomes wearisome, and no matter how enlightened the organizers or the gathered crowd, this old model seems to be dredged up like a comfortable old blanket on a cold night." [1]

Both the actual content of the conference and the design principles (of the gathering) are completely open (including for example not limited in their reuse in any way by copyright) for everyone to add to and improve. The design stuff - the design principles, and all experiential knowledge that people want to contribute from putting them into practice is share and share alike.

In practice this might be achieved by some sort of acknowledgement at the start of any process that all content and design materials are considered to be released under (for example?) the GNU Free Documentation License.

Although there may be circumstances when complete openness seems inappropriate, gatherings adopting OSCD will tend to be open and inclusive.

Circumstances when complete openness might seem inappropriate can include providing a sense of security for some participants who might not otherwise contribute or contribute as much, for example if there is any element of conflict resolution in the reasons for the gathering.

There is perhaps a sense in which participants adopting OSCD generally do not see conflict as inevitable.

Because of the presumption of openness OSCD gatherings would be unlikely to be inward looking and generally would be likely to adopt outward looking attitudes.

For example an agenda can be created through open collaboration on a wiki such as this one. The agenda should be open as soon as possible from when the conference is proposed.

There may be tensions here which need to be worked through. For example objections (to openness) which tend to be of the kind - "people won't come" without certainty over various aspects

Listing questions to work on in advance[edit | edit source]

Questions to work on (including collaboratively for example via a wiki) in advance might come from the original reasons for calling the conference.

Sowing the seeds of future collaboration

Sometimes there may not be much actual collaboration at a particular conference, but it may be that there are ways of paving the way for future collaboration.

Meaningful meetings: how can meetings be made better? Geoff Mulgan, Nesta, October 13 [2]

From the paper's Introduction:

"Many of us spend much of our time in meetings and at conferences. But too often these feel like a waste of time, or fail to make the most of the knowledge and experience of the people present.

Meetings have changed - with much more use of online tools, and a growing range of different meeting formats. But our sense is that meetings could be much better run and achieve better results.

This paper tries to help. It summarises some of what's known about how meetings work well or badly; makes recommendations about how to make meetings better; and showcases some interesting recent innovations. It forms part of a larger research programme at Nesta on collective intelligence which is investigating how groups and organizations can make the most of their brains, and of the technologies they use.

We hope the paper will be helpful to anyone designing or running meetings of any kind, and that readers will contribute good examples, ideas and evidence which can be added into future versions."

A summary of the paper's recommendations 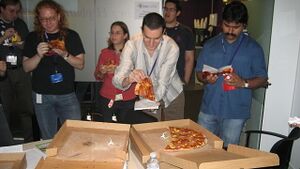 BarCamp is an international network of user-generated conferences primarily focused around technology and the web. They are open, participatory workshop-events, the content of which is provided by participants. The first BarCamps focused on early-stage web applications, and were related to open source technologies, social software, and open data formats.

The format has also been used for a variety of other topics, including public transit, health care, education, and political organizing. W 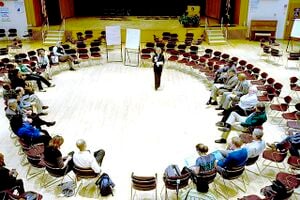 Open Space Technology (OST) is an approach which includes a way for hosting meetings, conferences, symposiums, and community summit events, focused on a specific and important purpose or task — but beginning without any formal agenda, beyond the overall purpose or theme.

"Open Space is the only process that focuses on expanding time and space for the force of self-organisation to do its thing. Although one can't predict specific outcomes, its always highly productive for whatever issue people want to attend to. Some of the inspiring side effects that are regularly noted are laughter, hard work which feels like play, surprising results and fascinating new questions." W 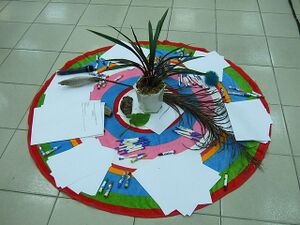 An unconference, also called OpenSpace conference is a participant-driven meeting. The term "unconference" has been applied, or self-applied, to a wide range of gatherings that try to avoid one or more aspects of a conventional conference, such as fees, sponsored presentations, and top-down organization. For example, in 2006, CNNMoney applied the term to diverse events including Foo Camp, BarCamp, Bloggercon, Mashup Camp, and Podcamp City Online. W 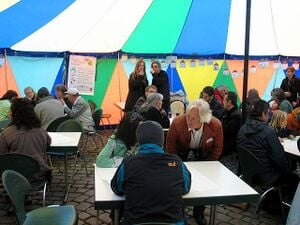 The "World Café" is a structured conversational process intended to facilitate open and intimate discussion, and link ideas within a larger group to access the "collective intelligence" or collective wisdom in the room. Participants move between a series of tables where they continue the discussion in response to a set of questions, which are predetermined and focused on the specific goals of each World Café. A café ambience is created in order to facilitate conversation and represent a third place. In some versions a "talking stick" may be used to make sure that all participants get a chance to speak. As well as speaking and listening, individuals are encouraged to write or doodle on a paper tablecloth so that when people change tables they can see what previous members have expressed in their own words and images. The first World Café event was organized in 1995 and since then the number of people who have participated in events is estimated to be in the tens of thousands. W

Is it possible to devise or find opportunities to practice OSCD? See also right hand column.

Page data
Retrieved from "https://www.appropedia.org/w/index.php?title=Open_conference_design&oldid=641675"
Cookies help us deliver our services. By using our services, you agree to our use of cookies.
Categories:
About Appropedia · Policies · Contact · Content is available under CC-BY-SA-4.0 unless otherwise noted.