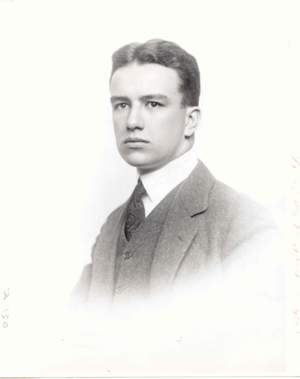 Buckminster Fuller (often referred to as "Bucky") (1895-1983) was an American visionary, designer, architect, and inventor. He was concerned with the question of whether humanity has a chance to survive successfully on planet Earth, and if so, how. He devoted his life to this question, trying to find out what an individual like him could do to improve humanity's condition, feeling that large organizations, governments, and private enterprises were unable to do so.

Fuller has designed a house that can be built by a single person in a matter of days, user-friendly plumbing technology, buildings which self-air condition via ventilation design, world energy grid, etc. He has also designed a comprehensive world-saving plan, including such things as architectural designs and a world energy grid, outlined in his book Critical Path. He called his book Critical Path because he felt that humans will not implement this plan until they have reached a state of emergency.

Fuller wrote twenty-seven additional books, coining and popularizing terms such as "spaceship earth", ephemeralization, and synergetics. He also created a large number of inventions, mostly in design and architecture, notably the geodesic dome. His work is a major source of inspiration for the Hexayurt. Most of his inventions never made it into production, and he was strongly criticized in most of the fields that he tried to influence (such as architecture), or simply dismissed as a hopeless utopian. Fuller's proponents believe that his work has not received the attention it deserves.

Late in his life, he traveled the world giving lectures.

"To make the world work for a 100% of humanity, in the shortest possible time, through spontaneous cooperation and without ecological offense or the disadvantage of any one." / Sustainable livelihood "Nature is trying very hard to make us succeed, but nature does not depend on us. We are not the only experiment."

"Of course, our failures are a consequence of many factors, but possibly one of the most important is the fact that society operates on the theory that specialization is the key to success, not realizing that specialization precludes comprehensive thinking."

Then you will conceive your own way of doing that which needs to be done - that no one else has told you to do or how to do it.

This will bring out the real you that often gets buried inside a character that has acquired a superficial array of behaviours induced or imposed by others on the individual."

"If success or failure of this planet and of human beings depended on how I am and what I do...

How would I be?

What would I do?"

"I live on Earth at present, and I don't know what I am. I know that I am not a category. I am not a thing a noun. I seem to be a verb, an evolutionary process an integral function of the universe." "You never change things by fighting the existing reality. To change something, build a new model that makes the existing model obsolete."

"We are here as local information harvesters, local problem-solvers in support of the integrity of eternally regenerative Universe. The fact that we get away from physical problems doesn't mean we go away from problems. The problems are really rarely physical." Only Integrity is Going to Count (1983) "All of humanity now has the option to "make it" successfully and sustainably, by virtue of our having minds, discovering principles and being able to employ these principles to do more with less."

"We are called to be architects of the future, not its victims."[1]

Page data
Retrieved from "https://www.appropedia.org/w/index.php?title=Buckminster_Fuller&oldid=668477"
Cookies help us deliver our services. By using our services, you agree to our use of cookies.
Categories:
About Appropedia · Policies · Contact · Content is available under CC-BY-SA-4.0 unless otherwise noted.