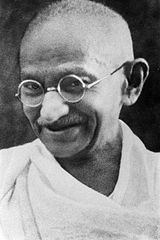 Mohandas Karamchand Gandhi (2 October 1869 – 30 January 1948) was the preeminent leader of the Indian independence movement in British-ruled India. Employing nonviolent civil disobedience, Gandhi led India to independence and inspired movements for civil rights and freedom across the world. The honorific Mahatma — applied to him first in 1914 in South Africa, — is now used worldwide. He is also called Bapu in India. His birthday, 2 October, is commemorated as Gandhi Jayanti, a national holiday, and world-wide as the International Day of Nonviolence. W

"The difference between what we do and what we are capable of doing would suffice to solve most of the world's problems."

"You should be the change that you want to see in the world."

"There is more to life than increasing its speed."

"The future depends on what we do in the present.."

"Democracy, disciplined and enlightened, is the most beautiful thing in the world."

"Civilisation, in the real sense of the term, consists not in the multiplication, but in the deliberate and voluntary reduction of wants."

"If it is man's privilege to be independent, it is equally his duty to be inter-dependent."

"I will give you a talisman. Whenever you are in doubt, or when the self becomes too much with you, apply the following test. Recall the face of the poorest and the weakest man [woman] whom you may have seen, and ask yourself, if the step you contemplate is going to be of any use to him [her]. Will he [she] gain anything by it? Will it restore him [her] to a control over his [her] own life and destiny? In other words, will it lead to swaraj [freedom] for the hungry and spiritually starving millions?
Then you will find your doubts and your self melt away."

"Let India be and remain the hope of all the races of the earth, whether in Asia, Africa or any part of the world...[The message of Asia] is not to be learnt through Western spectacles or by imitating the atom bomb. If you want to give a message to the West it must be a message of love and truth. In this age of democracy, in this age of awakening of the poorest of the poor, you must redeliver this message with the greatest emphasis."

"I object to violence because when it appears to do good, the good is only temporary; the evil it does is permanent."