From Appropedia
Redirected from Wales 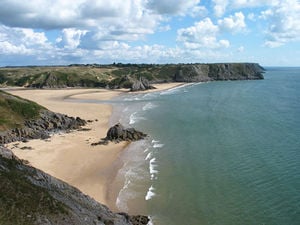 Wales (Welsh: Cymru [ˈkəm.rɨ] (listen)) is a country that is part of the United Kingdom. It is bordered by England to the east, the Irish Sea to the north and west, and the Bristol Channel to the south. It had a population in 2011 of 3,063,456 and has a total area of 20,779 km2 (8,023 sq mi). Wales has over 1,680 miles (2,700 km) of coastline and is largely mountainous with its higher peaks in the north and central areas, including Snowdon (Yr Wyddfa), its highest summit. The country lies within the north temperate zone and has a changeable, maritime climate.

Keep Wales Tidy is a Welsh national voluntary environmental charity which works towards achieving "a clean, safe and tidy Wales". It works in partnership with Local Authorities, schools and community groups, and organisations such as Waste Awareness Wales and Environment Wales in order to achieve these goals.

Wales has three national parks: Snowdonia, Brecon Beacons and Pembrokeshire Coast. It has five Areas of Outstanding Natural Beauty; Anglesey, the Clwydian Range and Dee Valley, the Gower Peninsula, the Llŷn Peninsula, and the Wye Valley.[1]

Size of Wales is a climate change charity with the aim of conserving an area of tropical rainforest twice the size of Wales. The project currently supports 7 forest protection projects and 1 tree planting project across Africa and South America. The charity focuses upon furthering the promotion of rainforest conservation as a national response to the global issue of climate change.

Size of Wales aims to raise awareness about climate change and the importance of protecting the natural world through their Education Programme, visiting schools across Wales and delivering interactive and educational workshops and special events. Additionally, Size of Wales hosts a number of campaigns to raise awareness about the cause and effects of climate change and equally raise funds for their forest projects. Flagship campaign, Go Green Day encourages businesses, schools and other groups or individuals to take green action - from wearing a green wig to pledging changes in behavior for the sake of our environment.

The Gower Peninsula was the first area in the United Kingdom to be designated as an Area of Outstanding Natural Beauty, in 1956. As of 2019, the coastline of Wales had 40 Blue Flag beaches, three Blue Flag marinas and one Blue Flag boat operator.[2]

CALM Campaign Against the Levels Motorway, on facebook - Campaign for the Protection of Rural Wales, charity in Wales that aims to secure the protection and enhancement of the country's landscapes and environment