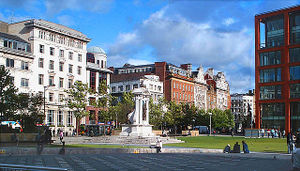 Climate emergency declared in 2019. Manchester aiming to be a zero-carbon city by 2038.

City of Trees, movement to re-invigorate Greater Manchester's landscape by transforming underused, unloved woodland and planting a tree for every man, woman and child who lives there, within a generation

Red Rose Forest, community forest in western and central Greater Manchester, England. It was founded in 1991 and is expected to take 40 years to develop and mature, with the aim of involving communities in safeguarding and creating a woodland flora for the future, and helping preserve the fast disappearing flora of British woodlands. The population within the Forest boundary amounts to 1.5 million, making it the largest urban community forest in the United Kingdom.

The main aim is to get greenery where people can appreciate it every day. This includes street trees, green roofs and green spaces. Red Rose Forest's Green Streets team works with local communities on unique and innovative greening projects to improve the quality of life for urban communities. The value of greening as a means of tackling a range of social, health and economic issues is huge. Red Rose Forest offers many ways for the people to get involved in their environment including the general public through their Friends of the Forest scheme, businesses through sponsorship and communities through the Green Streets project. W

People's Plan, an independent public engagement programme, by and for citizens and civil society of Greater Manchester

Love Your Bike campaign based in Greater Manchester, co-ordinated by Manchester Friends of the Earth - Critical Mass bicycle rides in Manchester

Page data
Retrieved from "https://www.appropedia.org/w/index.php?title=Manchester_community_action&oldid=658470"
Cookies help us deliver our services. By using our services, you agree to our use of cookies.
Categories:
About Appropedia · Policies · Contact · Content is available under CC-BY-SA-4.0 unless otherwise noted.