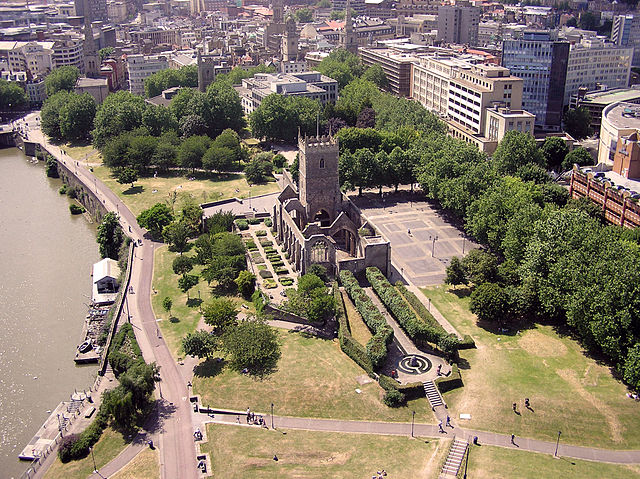 Bristol ( (listen)) is a city, ceremonial county and unitary authority in England. Situated on the River Avon, it is bordered by the ceremonial counties of Gloucestershire to the north and Somerset to the south. Bristol is the most populous city in South West England.The wider Bristol Built-up Area is the eleventh most populous urban area in the United Kingdom.

Iron Age hillforts and Roman villas were built near the confluence of the rivers Frome and Avon. Around the beginning of the 11th century, the settlement was known as Brycgstow (Old English: 'the place at the bridge'). Bristol received a royal charter in 1155 and was historically divided between Gloucestershire and Somerset until 1373 when it became a county corporate. From the 13th to the 18th century, Bristol was among the top three English cities, after London, in tax receipts.

Bristol was ranked in 2008 as the UK's most sustainable city by the environmental charity Forum for the Future, and in 2015 it received the European Green Capital Award. The Bristol Green Capital initiative is managed by a partnership supported by the City Council. Bristol is home to the environmental charities Sustrans, the Soil Association, and the Centre for Sustainable Energy. The city provides a range of recycling services for household waste.

In 2019, Bristol became the first city to completely ban diesel cars, effective from 2021. Diesel cars will be banned from the central area of the city between 7am and 3pm every day. W 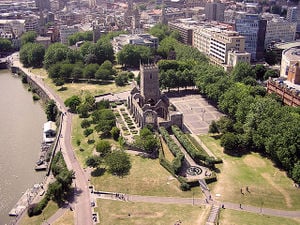 Looking across Castle Park in central Bristol, from a tethered passenger balloon at 500 feet. The channeled River Avon (called the Floating Harbour) is on the left. Attribution: Adrian Pingstone
From Wikipedia:Avon Green Belt

The Avon Green Belt, also known as the Bristol and Bath Green Belt (or Bath and Bristol Green Belt), is a non-statutory green belt environmental and planning policy that regulates urban expansion and development in the countryside surrounding the cities of Bristol and Bath in the South West region of England. It covers areas in Bristol, South Gloucestershire, North Somerset, Bath and North East Somerset, Mendip, and Wiltshire. Essentially, the function of the green belt is to limit urban sprawl and maintain the open character of areas around the Bristol and Bath built up areas, and nearby towns and villages. The policy is implemented by local planning authorities on the basis of guidance from central government.

The Bristol Democracy Project, Getting People Involved In Decision Making In Bristol

Wikipedia: Bristol, Twin cities: Bristol was among the first cities to adopt the idea of town twinning. Its twin towns include:

Bristol Energy Network, umbrella organisation for all community energy groups in Bristol and the surrounding area

From Wikipedia:Transport in Bristol § Cycling

Despite being hilly, Bristol is one of the prominent cycling cities of England and home to the national cycle campaigning group Sustrans. It has a number of urban cycle routes, as well as links to National Cycle Network routes to Bath and London, to Gloucester and Wales, and to the south-western peninsula of England. In 2011, 7.7% of journeys to work were by bicycle.

Bristol was awarded £22.8 million in 2011 to double its cycling population after being awarded "cycling city" status. The program lead to new cycle routes, more cycle parking, better signage and training and events.

Routes in Bristol include the Bristol and Bath Railway Path, Concorde Way between the centre and north Bristol, Festival Way between the centre and the town of Nailsea, Malago and Filwood Greenways to the south of Bristol and Frome Valley Greenway to the north-east of Bristol. Improvements to The Centre have created new cycle paths to better connect radial routes together.

The Runnymede Trust found in 2017 that Bristol "ranked 7th out of the 348 districts of England & Wales (1=worst) on the Index of Multiple Inequality." In terms of employment, the report found that "ethnic minorities are disadvantaged compared to white British people nationally, but this is to a greater extent in Bristol, particularly for black groups." Black people in Bristol experience the 3rd highest level of educational inequality in England and Wales.

A Good Transport Plan for Bristol 2016